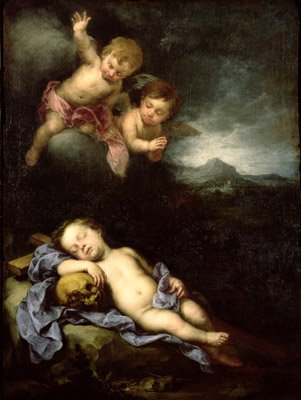 O Radix Iesse is one of my favourite O Antiphons because it brings together the invocation of the Holy Spirit, the mystery of the Cross, the Holy Face, and the promise of Christ Himself that, indeed, He is coming soon. It wasn’t easy to choose an image for this reflection. In the end, I decided on Murillo’s Infant Jesus Sleeping on the Cross.

O Root of Jesse
The image of the Root of Jesse comes from the eleventh chapter of Isaiah where he says, “And there shall come forth a rod out of the root of Jesse, and a flower shall rise up out of His root” (Is 11:1). It is the passage that enumerates the gifts of the Holy Spirit; from the Vulgate, the Catholic tradition counts seven gifts. “And the spirit of the Lord shall rest upon Him: the spirit of wisdom, and of understanding, the spirit of counsel, and of fortitude, the spirit of knowledge, and of godliness. And He shall be filled with the spirit of the fear of the Lord” (Is 11:2-3). This means that when we cry out, “Come,” to the Root of Jesse who is Christ, we are, in the same prayer, invoking the Holy Spirit who, in His sevenfold gift, comes to us with the Son.
The Tree of the Cross
Isaiah goes on to say in the tenth verse of the same chapter: “On that day the root of Jesse shall stand as a signal to the peoples; the nations shall inquire of Him.” The Root of Jesse is given, not only to Israel, but as a signal to the nations, a standard around which all peoples will rally. In fulfillment of Isaiah’s prophecy, Jesus says of himself, “And I, when I am lifted up from the earth, will draw all men to myself” (Jn 12:32). The Root of Jesse is already the profile of the Cross: a figure of the glorious standard of the King, the Vexilla Regis of which we sing in the Vespers hymn of September 14th. Today’s O Antiphon opens onto the Paschal Mystery: the Root of Jesse announces that the advent of the Son is ordered to the mission of redemption that He will accomplish on the Tree of the Cross.
Like a Root Out of Dry Ground
The mystery of the Cross is brought into focus more clearly in the next line: “before whom kings shall shut their mouths.” The text is taken from Isaiah 52 and leads directly into the Song of the Suffering Servant. “So He shall startle many nations; kings shall shut their mouths because of Him” (Is 52:10). This silence of the kings of the earth expresses numbed astonishment. They are dumbstruck by the humble Root of Jesse gloriously exalted, all the more because, “He grew up before the Lord like a young plant a like a root out of dry ground; He had no form or comeliness that we should look at Him, and no beauty that we should desire Him. He was despised and rejected by men; a man of sorrows, and acquainted with grief; and as one from whom men hide their faces” (Is 53:2-3).
The Verbum Crucis
The silence of the kings of the earth is their amazement before the triumph of the Cross. The verbum Crucis, the “word of the Cross” (1 Cor 1:18) shuts the mouth of every earthly king. The psalm given us for the Introit of the Christmas Mass During the Night will describe the machinations of earthly powers against the Christ of God: “The kings of the earth set themselves, and the rulers take counsel together, against the Lord and His anointed” (Ps 2:2). But already, in today’s O Antiphon, we see them judged from the Cross; they have no judgments to give, no verdicts, and no decrees, “for the foolishness of God is wiser than men, and the weakness of God is stronger than men” (1 Cor 1:25).
All the Earth Desires to See His Face
The next line of the antiphon — “and whom the nations shall seek” — is not quite as easy to grasp. Its meaning is in the verb used in the Latin text: “quem gentes deprecabuntur.” The verb deprecari means to implore, to seek favour, to entreat, or to seek, as in Psalm 44:13, “The richest of the people shall seek your favour.” The underlying sense of deprecabuntur is found in two very revealing related passages. “And all the earth desired to see Solomon’s face, to hear his wisdom, which God had given in his heart” (1 K 10:24). The same text occurs in 2 Chronicles 9:23. You recognize it, I think, as the very text used for the first antiphon of the First Vespers of Christmas: “The King of Peace is magnified and all the earth desires to see His face.”
Christ the King
What is described in today’s Great O is this: the kings of the earth, dumbstruck by the mystery of the Cross and Resurrection, are forsaken by the nations who, instead of following them in their worldly wisdom and power, now seek Christ, the Root of Jesse, the King who rules from the Tree of the Cross with the wisdom that the world dismisses as folly and with the power that the world judges weak.
The Waiting of All the Ages
The last part of the antiphon is the plea itself that begins with the great cry, “Veni — O come” with its dramatic do-fa interval leaving the second syllable suspended for what seems like a long moment on the mi. In that suspended mi, we are meant to hear the waiting of all the ages! “O Come, and deliver us, and do not delay.”
Coming Soon
The inspiration for the last phrase comes from the book of Habakuk. The Lord himself assures His prophet that the vision promised him will come to pass. “If it seems slow, wait for it; it will surely come, it will not delay” (Hab 2:3). The antiphon also sends us to the hope held out by the second to the last line of the whole Bible. There, Jesus himself, “the root and offspring of David, the bright morning star” (Rev 22:16) says, “Surely I am coming soon” (Rev 22:20). In that word of His lies all our hope.