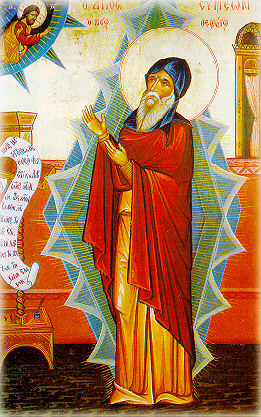 In this morning’s General Audience, our Holy Father presented yet another shining monastic figure as a model of holiness for the whole Church. Those who study attentively Pope Benedict XVI’s teachings will notice that he consistently refers to the monastic way as paradigmatic for all Christians, beginning with the clergy. There are not two “spiritualities” — one monastic and the other secular — there is but one way to holiness. It is the royal way of the Cross, directed to the knowledge of the glory of God that shines upon the Face of Christ, charted by the Word of God as interpreted by the Fathers, and marked by the celebration of the Sacred Liturgy, under the guidance of the Holy Spirit and the protecting mantle of the Holy Mother of God.

On the Way to Union With God
Dear brothers and sisters, today we pause to reflect on the figure of the Eastern monk Symeon the New Theologian, whose writings exercised a noteworthy influence on the theology and spirituality of the East, in particular, regarding the experience of mystical union with God.
Symeon the New Theologian was born in 949 in Galatia, in Paphlagonia (Asia Minor), of a noble provincial family. While still young, he went to Constantinople to undertake studies and enter the emperor’s service. However, he felt little attracted to the civil career before him and, under the influence of the interior illuminations he was experiencing, he looked for a person who would direct him through his moment of doubts and perplexities, and who would help him progress on the way to union with God.

Examination of Conscience
He found this spiritual guide in Symeon the Pious (Eulabes), a simple monk of the Studion monastery in Constantinople, who gave him to read the treatise “The Spiritual Law of Mark the Monk.” In this text, Symeon the New Theologian found a teaching that impressed him very much: “If you seek spiritual healing,” he read there, “be attentive to your conscience. Do all that it tells you and you will find what is useful to you.” From that moment — he himself says — he never again lay down without asking if his conscience had something for which to reproach him.

Union With Christ
Symeon entered the Studion monastery, where, however, his mystical experiences and his extraordinary devotion toward the spiritual father caused him difficulty. He transferred to the small convent of St. Mammas, also in Constantinople, where, after three years, he became director — the higumeno. There he pursued an intense search of spiritual union with Christ, which conferred on him great authority.
It is interesting to note that he was given there the name of “New Theologian,” notwithstanding the fact that tradition reserved the title of “Theologian” to two personalities: John the Evangelist and Gregory of Nazianzen. He suffered misunderstandings and exile, but was restored by the Patriarch of Constantinople, Sergius II.

Teachings and Miracles
Symeon the New Theologian spent the last phase of his life in the monastery of St. Macrina, where he wrote the greater part of his works, becoming ever more famous for his teachings and miracles. He died on March 12, 1022.
His best known disciple, Nicetas Stathos, who compiled and re-copied Symeon’s writings, prepared a posthumous edition, followed by a biography. Symeon’s work includes nine volumes, which are divided in theological, gnostic and practical chapters, three volumes of catechesis addressed to monks, two volumes of theological and ethical treatises, and a volume of hymns. Nor should we forget his numerous letters. All these works have found an important place in the Eastern monastic tradition down to our day.

The Spiritual Itinerary of the Baptized
Symeon focuses his reflection on the presence of the Holy Spirit in those who are baptized and on the awareness they must have of this spiritual reality. Christian life — he stresses — is intimate and personal communion with God; divine grace illumines the believer’s heart and leads him to the mystical vision of the Lord. In this line, Symeon the New Theologian insists on the fact that true knowledge of God stems from a journey of interior purification, which begins with conversion of heart, thanks to the strength of faith and love; passes through profound repentance and sincere sorrow for one’s sins; and arrives at union with Christ, source of joy and peace, invaded by the light of his presence in us. For Symeon, such an experience of divine grace is not an exceptional gift for some mystics, but the fruit of baptism in the life of every seriously committed faithful — a point on which to reflect, dear brothers and sisters!

Under the Guidance of the Holy Spirit
This holy Eastern monk calls us all to attention to the spiritual life, to the hidden presence of God in us, to honesty of conscience and purification, to conversion of heart, so that the Holy Spirit will be present in us and guide us. If in fact we are justly preoccupied about taking care of our physical growth, it is even more important not to neglect our interior growth, which consists in knowledge of God, in true knowledge, not only taken from books, but interior, and in communion with God, to experience his help at all times and in every circumstance.

Lord, Are You Really Here?
Basically, this is what Symeon describes when he recounts his own mystical experience. Already as a youth, before entering the monastery, while prolonging his prayer at home one night, invoking God’s help to struggle against temptations, he saw the room filled with light. When he later entered the monastery, he was given spiritual books to instruct himself, but the readings did not give him the peace he was looking for. He felt — he recounts — like a poor little bird without wings. He accepted this situation with humility, did not rebel, and then the visions of light began to multiply again. Wishing to be certain of their authenticity, Symeon asked Christ directly: “Lord, are you yourself really here?” He felt resonate in his heart an affirmative answer and was greatly consoled. “That was, Lord,” he wrote later, “the first time you judged me, prodigal son, worthy to hear your voice.” However, this revelation did not leave him totally at peace either. He even wondered if that experience should not be considered an illusion.

The Love that Springs from Another Source
Finally, one day an essential event occurred for his mystical experience. He began to feel like “a poor man who loves his brothers” (ptochos philadelphos). He saw around him many enemies that wanted to set snares for him and harm him but despite this he felt in himself an intense movement of love for them. How to explain this? Obviously, such love could not come from himself, but must spring from another source. Symeon understood that it came from Christ present in him and all was clarified for him: He had the sure proof that the source of love in him was the presence of Christ and that to have in oneself a love that goes beyond one’s personal intentions indicates that the source of love is within. Thus, on one hand, we can say that, without a certain openness to love, Christ does not enter in us, but, on the other, Christ becomes the source of love and transforms us.
Dear friends, this experience is very important for us, today, to find the criteria that will indicate to us if we are really close to God, if God exists and lives in us. God’s love grows in us if we are really united to him in prayer and in listening to his word, with openness of heart. Only divine love makes us open our hearts to others and makes us sensitive to their needs, making us regard everyone as brothers and sisters and inviting us to respond with love to hatred, and with forgiveness to offense.

The Spiritual Father
Reflecting on the figure of Symeon the New Theologian, we can still find a further element of his spirituality. In the path of ascetic life proposed and followed by him, the intense attention and concentration of the monk on the interior experience confers on the spiritual father of the monastery an essential importance. The young Symeon himself, as has been said, had found a spiritual director who greatly helped him and for whom he had very great esteem, so much so that, after his death, he also accorded him public veneration.

Valid for All
And I would like to say that this invitation continues to be valid for all — priests, consecrated persons and laypeople — and especially for young people — to take recourse to the counsels of a good spiritual father, capable of accompanying each one in profound knowledge of oneself, and leading one to union with the Lord, so that one’s life is increasingly conformed to the Gospel. We always need a guide, dialogue, to go to the Lord. We cannot do it with our reflections alone. And this is also the meaning of the ecclesiality of our faith, of finding this guide.

Guided by the Love and Knowledge of Christ
Thus, to conclude, we can summarize the teaching and mystical experience of Symeon the New Theologian: In his incessant search for God, even in the difficulties he met and the criticism made of him, he, in a word, allowed himself to be guided by love. He was able to live personally and to teach his monks that what is essential for every disciple of Jesus is to grow in love and so we grow in knowledge of Christ himself, to be able to say with St. Paul: “It is no longer I who live, but Christ who lives in me” (Galatians 2:20).