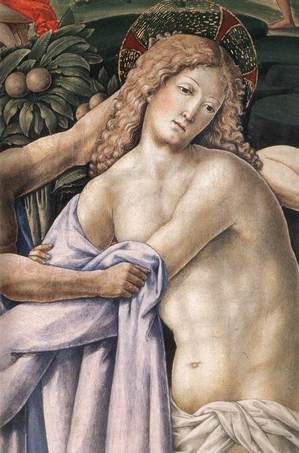 Francesco di Giorgio Martin (1439-1502) painted this disrobing of Our Lord in His Passion. The youthful aspect of Christ recalls Joseph, who was also stripped by his brothers before being cast into a cistern, and then sold to traders from Midian.
Friday of the Second Week of Lent
Genesis 37:3-4, 12-13a, 17b-28a
Matthew 21:33-43, 45-46
Did You Never Read in the Scriptures?
The question that Our Lord puts to chief priests and Pharisees in today’s Gospel is addressed to us as well. Jesus said to them, “Did you never read in the Scriptures; ‘The stone that the builders rejected has become the cornerstone?'” (Mt 21:42). There is irony in His question. The chief priests and Pharisees were great readers of the Scriptures; they knew the psalms very well, probably by heart. They studied the Scriptures and recited the psalms without recognizing in them the One whose mystery they reveal.
Everything Written About Me
In Saint John, Our Lord says, “You search the scriptures, because you think that in them you have eternal life; and it is they that bear witness to Me; yet you refuse to come to Me that you may have life” (Jn 5:39). In Saint Luke, He makes this quite clear: “Everything written about Me in the law of Moses and the prophets and the psalms must be fulfilled” (Lk 24:45).

Removing the Veil
Let us not think, even for a moment, that Our Lord’s pointed question is not addressed to us. We are all capable of reading the Scriptures without discovering in them the Face of Christ. We are all capable of repeating psalms without hearing in them the Voice of Christ. The most avid students of the Scriptures risk being familiar with the text without entering, through it, into familiarity with the secrets of the Heart of Christ. Saint Paul warned the Corinthians that is indeed possible to read the Scriptures with a veil over the mind obscuring the mystery of Christ. “But when a man turns to the Lord,” he says, “the veil is removed” (2 Cor 3:16).
The Sacrament of Scripture
Sacred Scripture is a sacrament: an outward sign — in this case, words — inspired by the Holy Spirit, to reveal the Face of Jesus to the eyes of our soul; the Voice of Jesus to the ear of our spirit; and the Heart of Jesus to our hearts. Saint Benedict in Chapter Nineteen of the Rule enjoins us to sing the psalms in such a way that we taste them inwardly. “Psallite sapienter” (RB 19:4). “Have in your mouths the taste of the psalms.” The taste of the psalms is the mystery of Christ communicated to the palate of the soul; it is the prayer of Christ to His Father given us in a holy communion under the species of human words.
Feeding on Scripture
Many years ago, Father Maurice Zundel gave me this sense of the Scriptures as a tabernacle of Christ’s hidden presence. Not text, but daily bread! “Scripture,” he wrote, “is a person, Scripture is Jesus. Before as after His advent it is full of Him. Before, it is the night drawing towards the dawn; after, it is the sky brilliant with the midday sun. . . . Scripture can be understood only on our knees, as we feed upon it and become aware of an invisible current of air that moves all its leaves in an unconstrainable aspiration towards the glorious Countenance of Jesus Christ. The true sense of Scripture always lies beyond, beyond the words, the concepts, and the events which are but signs in which faith detects the presence of the Only Son” (The Splendour of the Liturgy, [New York, Sheed and Ward, 1937], 284).
Psalm 30
The Entrance Antiphon in the reformed Missal (which, incidentally, differs from the Introit in the Graduale Romanum) is the perfect illustration of Father Zundel’s principle. It is taken from Psalm 30, one of three great psalms of Our Lord’s Passion; the other two being Psalm 21 and Psalm 68. In Saint Luke’s account of the Passion, Jesus chooses Psalm 30 as His own prayer to the Father from the cross. Priest and Victim, Our Lord utters but a single verse: “Father, into Thy hands I commit my spirit” (Ps 30:6), but in so doing, He appropriates the entire psalm. The very soul of the crucified Jesus and all the sentiments of His Sacred Heart,pass into the words of the psalm and, through the psalm, pass into us.
Joseph’s Prayer
The verses of Psalm 30 in today’s Entrance Antiphon must be heard in several voices. “In Thee, O Lord, have I hoped; let me never be confounded. Bring me out of this snare which they have hidden for me, for Thou art my protector.” I hear the anguished voice of the young Joseph, sent (missus) by his father to his brothers. They strip him of his long tunic, throw him into a cistern, and finally sell him to a passing caravan for twenty pieces of silver. Joseph is a figure of Christ. Joseph’s prayer is the prayer of Christ.
The Voice of Jesus in His Passion
In the same verses I hear the voice of the son sent (missus) by the father into the vineyard. The Son sent by the Father, the Son seized and killed by the tenants of the vineyard, is none other than Christ. Hear then, in Psalm 30, the voice of Jesus in his bitter Passion: “In Thee, Father, have I hoped; let Me never be confounded. Bring Me out of this snare which they have hidden for Me, for Thou, Father, art My protector” (cf. Ps 30: 2, 5).
Let Us Kill Him
The prayer of Our Lord given us in Psalm 30 contrasts with the chilling proposal of Joseph’s brothers in the First Reading: “Come now, let us kill him” (Gen 37:20), a proposal that is echoed word for word in the Gospel: “Come, let us kill him” (Mt 21:37). The cry, “Kill him!” has become history’s murderous refrain in every place, in every age. We heard it in the horrors of the Holocaust; we heard it in every death camp, in every genocide, in every war. We hear it in every muted attack on one another, in every unkind word, rash judgment, and angry outburst. We hear it even in the cold death-dealing silence of rejection, the silence that says, “You are to me as one dead.”
The Prayer of Christ the Priest
The Church hears this cry from points all over the globe. She hears it and suffers with those targeted by hatred, those cast into cisterns and prisons, those betrayed by their own, and sold, and killed. To counter the cry, “Kill him!” the Church has the all-powerful prayer of Christ the Priest, Who “offered up prayers and supplications, with loud cries and tears, to Him who was able to save Him from death, and He was heard for His godly fear” (Heb 5:7). The Church holds that prayer of Christ in the psalms; she possesses it in the Most Holy Eucharist. And she gives that pray to us, so that with it we may plead for mercy and be delivered out of all our fears. By the prayer of Christ alone is it possible to make reparation for every murderous threat, every evil scheme, and every project of bloodshed.