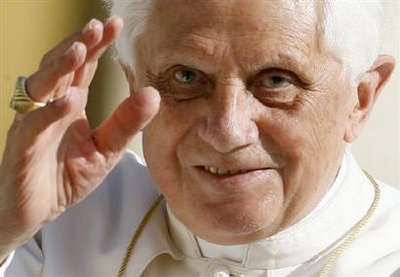 VATICAN CITY, 16 MAR 2009 (VIS) – This morning in the Vatican the Holy Father received members of the Congregation for the Clergy, who are currently celebrating their plenary assembly on the theme: “The missionary identity of priests in the Church as an intrinsic dimension of the exercise of the ‘tre munera'”.

“The missionary dimension of a priest arises from his sacramental configuration to Christ the Head”, said the Pope. This involves “total adherence to what ecclesial tradition has identified as ‘apostolica vivendi forma’, which consists in participation … in that ‘new way of life’ which was inaugurated by the Lord Jesus and which the Apostles made their own”.

Benedict XVI highlighted the “indispensable struggle for moral perfection which must dwell in every truly priestly heart. In order to favour this tendency of priests towards spiritual perfection, upon which the effectiveness of their ministry principally depends, I have”, he said, “decided to call a special ‘Year for Priests’ which will run from 19 June 2009 to 19 June 2010”. This year marks “the 150th anniversary of the death of the saintly ‘Cure of Ars’, Jean Marie Vianney, a true example of a pastor at the service of Christ’s flock”.

“The ecclesial, communional, hierarchical and doctrinal dimension is absolutely indispensable for any authentic mission, and this alone guarantees its spiritual effectiveness”, he said.

“The mission is ‘ecclesial'”, said the Pope, “because no-one announces or brings themselves, … but brings Another, God Himself, to the world. God is the only wealth that, definitively, mankind wishes to find in a priest.

“The mission is ‘communional’ because it takes place in a unity and communion which only at a secondary level possess important aspects of social visibility. … The ‘hierarchical’ and ‘doctrinal’ dimensions emphasise the importance of ecclesiastical discipline (a term related to that of ‘disciple’) and of doctrinal (not just theological, initial and permanent) formation”.

Benedict XVI stressed the need to “have care for the formation of candidates to the priesthood”, a formation that must maintain “communion with unbroken ecclesial Tradition, without pausing or being tempted by discontinuity. In this context, it is important to encourage priests, especially the young generations, to a correct reading of the texts of Vatican Council II, interpreted in the light of all the Church’s doctrinal inheritance”.

Priests must be “present, identifiable and recognisable – for their judgement of faith, personal virtues and attire – in the fields of culture and of charity which have always been at the heart of the Church’s mission”.

“The centrality of Christ leads to a correct valuation of priestly ministry, without which there would be no Eucharist, no mission, not even the Church. It is necessary then, to ensure that ‘new structures’ or pastoral organisations are not planned for a time in which it will be possible to ‘do without’ ordained ministry, on the basis of an erroneous interpretation of the promotion of the laity, because this would lay the foundations for a further dilution in priestly ministry, and any supposed ‘solutions’ would, in fact, dramatically coincide with the real causes of the problems currently affecting the ministry”