Skip to content
HomeLent 2009Feast of the Via Crucis 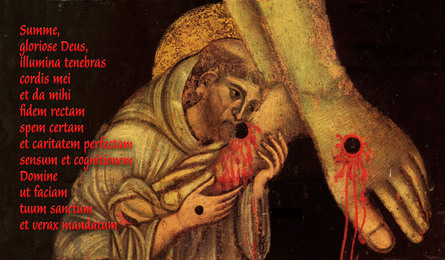 In the traditional Franciscan calendar, the First Friday of March is kept as the feast of the Via Crucis, the Way of the Cross. The texts of the Proper Office for the feast are magnificent; most of them are taken from Isaiah 52:13 –53:12. I was especially pleased to note that in the Franciscan Breviary’s Third Lesson at Matins of the feast, the sons of Saint Francis recognize the role played by Saint Bernard, the Abbot of Clairvaux, in the development of devotion to the Passion. 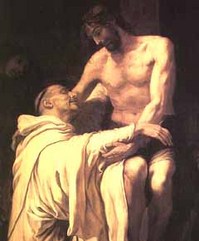 Saint Bernard, the “most contagious” abbot of the 12th century, had inflamed the hearts of his monks with love for the Suffering Christ. By means of his widely circulated sermons and other writings, Cistercian devotion to the Passion ran across Europe like a fire in stubble.

“My beloved is to me a little bundle of myrrh.” From the early days of my conversion, conscious of my grave lack of merits, I made sure to gather for myself this little bundle of myrrh. It was culled from all the anxious hours and bitter experiences of my Lord. . . . there were the insults, the spitting, the blows, the mockery, the scorn, the nails, and similar torments, and all for the salvation of our race. Among the little branches of this perfumed myrrh I feel we must not forget the myrrh which He drank upon the cross and was used for His anointing at burial. In the first of these he took upon Himself the bitterness of my sins, in the second He affirmed the future incorruption of my body. As long as I live I shall proclaim the abounding goodness in these events; for all eternity I shall not forget these mercies, for in them I have found life.
(Saint Bernard, On the Song of Songs, 43).

Following Saint Bernard and the other 12th century Cistercian authors, Saint Francis and his followers immersed themselves in the mystery of the Passion. Devotion to the suffering Christ is characteristic of the Franciscan spirit. Saint Bonaventure intensified this heritage and fostered its development by the Seraphic Order’s best preachers. Meditation on the Lord’s Passion found an effective and fruitful expression in the Way of the Cross, an exercise that allowed the faithful to follow in spirit the sorrowful way taken by Our Lord in Jerusalem. Saint Leonard of Port Maurice promoted the Way of the Cross. Stations of the Cross became a characteristic feature of the Catholic Churches. Through the ages the Popes have enriched the Way of the Cross with precious indulgences.
The antiphons at Vespers are full of compunction:
1. Christ suffered for our sakes, and left us his own example; we were to follow in his footsteps.
2. He did no wrong, no treachery was found on his lips.
3. He was ill spoken of, and spoke no evil in return, suffered, and did not threaten vengeance, gave himself up into the hands of injustice.
4. So, on the cross, his own body took the weight of our sins; we were to become dead to our sins, and live for holiness; it was his wounds that healed us.
5. Till then, we have been like sheep going astray; now, we have been brought back to him, our shepherd, who keeps watch over our souls.

The Little Chapter is drawn from Isaiah 53:6:
Strayed sheep all of us, each following his own path; and God lid on his shoulders our guilt, the guilt of us all.
Here is a strophe from the hymn:
Fill thou the weak with power from on high —
So may they tread the way of life undaunted,
So if they fall and sin again o’ertake them, —
Ever grant that they may promptly rise.
At the Magnificat:
Christ our King alone has taken pity on our sinfulness: obeying the Father he was led away as a lamb meek to be slaughtered.
And the Collect:
O God, who, by the glorious passion of thy Son,
has taught us to follow the way of the cross to attain to eternal glory,
grant in thy mercy that we may lovingly company with him to Calvary
and ever follow in his triumphant glory,
he who is God, living and reigning with thee,
in the unity of the Holy Spirit,
forever and ever.
All texts taken from The Little Breviary, J.H. Gottmer, Haarlem –Antwerp, 1957