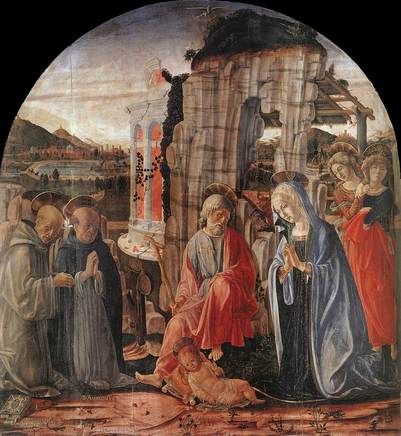 My incomparable Saint Bernard (depicted above with Saint Ambrose in a 1475 painting by Francesco di Giorgio Martini) spoke so eloquently this morning of the two mercies of God: the first is His eternal mercy prior to the Incarnation, the second is His mercy after the descent of the Word into this vale of tears. Listen to him:
Seeking What Was Lost

But God their Creator, seeking what was lost, mercifully followed His work, and came down in mercy to where they lay in misery.
To Liberate the Miserable

He willed to experience for Himself what they rightly deserved to suffer for having gone against Him, not out of a curiosity like theirs, but out of a wondrous charity; not so as to remain miserable with the miserable, but in order to liberate the miserable by becoming merciful. 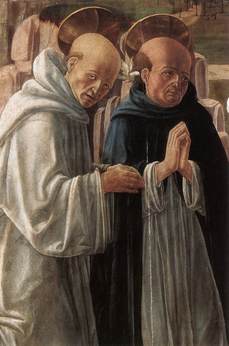 A Mercy Better Adapted to Us

He became merciful, I say, not of that mercy which He, happy from all eternity, already had, but of the mercy which He found whilst, clothed in our flesh, He made his way in misery. Then, in this mercy did He make perfect the work begun by the Father’s lovingkindness. It was not that this first mercy could not have sufficed, but because it would not have satisfied us. Both mercies are necessary, but the second of these is better adapted to us.

The Mercy Whose Mother is Misery

O design of ineffable tenderness! How could we have imagined the wondrous mercy of God, unless it had been first shaped by misery? How could we have turned toward a compassion unknown to us — eternal and impassible in God — had not His Passion gone before it? However, if this divine mercy that knew no misery had not been there in the beginning, the other mercy, the one whose mother is misery, would not have come. Had this mercy not come, it would not have have attracted us; had it not attracted us, it would not have extracted us. Extracted us out of what? Out of the pit of misery and the mire of mud. God has not forsaken His first mercy, but He has added to it; He has not changed it, but multiplied it, as it is written: Thou dost save man and beast alike, even as thou hast multiplied thy mercy, O God.
(Ex Tractatu sancti Bernardi abbatis De Gradibus humilitatis et superbiae)