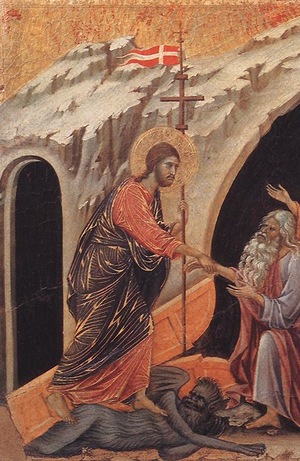 Seventh Monday of the Year II
James 3:13-18
Mark 9:14-29
I am a little late in posting this meditation on today’s readings at Holy Mass. Here it is, all the same.
Holy Wisdom
How does one discern a wisdom that is holy? How does one discern a holiness that is wise? Saint James tells us that “the wisdom which does from above is marked chiefly indeed by its purity, but also by its peacefulness; it is courteous and ready to be convinced, always taking the better part; it carries mercy with it, and a harvest of all that is good; it is uncensorious, and without affectation” (Jas 3:17). These are the qualities of a mature holiness, of what I would call a seasoned sanctity.
A Dog is Better Than I Am
Saint James speaks of “the meekness of wisdom” (Jas 3:13). One does not come to gentleness, and to “the meekness of wisdom” overnight. The precocious saint — his is an unwise holiness — is often censorious, harsh, and quick to judge. The seasoned saint —marked by a wisdom that is holy— is meek, kindly, and ever ready cover his brother’s failings with a cloak of mercy. One of the Desert Fathers, Abba Xoius, said, “A dog is better than I am, for he has love and he does not judge.”
Help My Unbelief
In today’s Gospel, the disciples fail in their attempts to deliver a possessed boy. The father of the tormented child utters one of the most powerful prayers recorded in the New Testament. “I do believe, help my unbelief” (Mk 9:24). Jesus responds to the humility and sincerity of his prayer, takes the boy by the hand, and lifts him up. We see the same thing in the wonderful icons of the Harrowing of Hell where, strong and radiant, the Risen Christ, takes Adam and Eve by the hand, and lifts them out of their tombs. Saint Mark adds, “and he arose”(Mk 9:27). The Greek verb used by Saint Mark here is the same one used in speaking of the resurrection of Christ. The sense here is one of full restoration to life.

Prayer
The disciples are filled with consternation and, I think, humiliated by their failure. Once alone with Jesus, they ask him, “Why could we not cast it out” (Mk 9:28)? Our Lord’s answer is mysterious. “This kind cannot be driven out by anything but prayer” (Mk 9:29). There are, in the Greek versions of this text, three variants. In one version, we read “prayer.” In a second, we read “prayer and fasting.” In yet a third, we read, “prayer and tears.” In all three variants, Our Lord’s answer leaves another question hanging over us. Is he referring to His own prayer, or to the prayer of the distressed father, “I believe, help my unbelief” (Mk 9:24)? It seems to me that the father’s prayer unleashed the power of the unfailing prayer of Christ.
The Filial and Priestly Prayer of Christ
The father, by admitting his own radical poverty, surrenders to a prayer infinitely stronger than his own: that of Christ the Eternal Son and High Priest. The spiritual resurrection of the Church will never be accomplished by the straining and striving of mere human effort. Rather, a certain experience of failure is, more often than not, just the thing that opens one to the power of the prayer of Christ and, through that prayer, to the grace of resurrection.
Toward Resurrection
We go to the altar for the Holy Sacrifice with the prayer of the distressed father in our hearts. “I believe, help my unbelief” (Mk 9:24). Like the disciples in the gospel, we are conscious of all that we cannot do but, far from falling into despair, we know that this is the very principle of resurrection in our own lives and in the Church. In Holy Mass, the prayer of Christ is ours. Let us throw ourselves headlong into it.