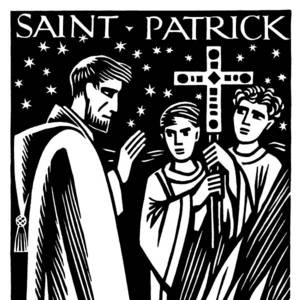 Saint Patrick’s Day Secularized
I wanted to buy a few cards for Saint Patrick’s Day to send to family and friends both in Ireland and in the U.S. The cards I saw in local shops were entirely secular, apart from a few sentimental “Irish Blessing” motifs. Many were in poor taste. Some were downright offensive. Even our local Celtica shop had precious little in the way of images of Saint Patrick. I irked the chirpy sales lady by saying that her so-called Saint Patrick’s Day cards were . . . heathen!
Remembering Adé
My mentor of thirty-five years ago, Catholic artist Adé Béthune, found her vocation when Dorothy Day asked her to make some good images of the saints. Adé’s saints appeared in the pages of the Catholic Worker. They were later printed as greeting cards and holy pictures. Conception Abbey’s Printery House has some decent Saint Patrick’s Day cards. There may be other sources too. Terry N. would know. For the most part what I saw today was . . . heathen!