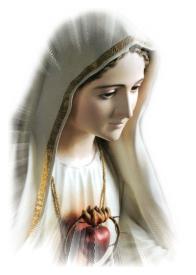 Was anyone else struck by the Holy Father’s allusion, in today’s Regina Caeli message, to the “Marian dimension” of Pope John Paul II’s death on the First Saturday of the month? “Many notice,” he said, “the singular coincidence, that brought together in itself the Marian dimension — the First Saturday of the month — and the dimension of Divine Mercy.” This discreet allusion to Our Lady of Fatima and to her role in the life and in the piety of John Paul II is, to my mind, very significant.
I recall what Joseph Cardinal Ratzinger wrote in 2000:
I would like finally to mention another key expression of the “secret” which has become justly famous: “my Immaculate Heart will triumph”. What does this mean? The Heart open to God, purified by contemplation of God, is stronger than guns and weapons of every kind. The fiat of Mary, the word of her heart, has changed the history of the world, because it brought the Saviour into the world—because, thanks to her Yes, God could become man in our world and remains so for all time. The Evil One has power in this world, as we see and experience continually; he has power because our freedom continually lets itself be led away from God. But since God himself took a human heart and has thus steered human freedom towards what is good, the freedom to choose evil no longer has the last word. From that time forth, the word that prevails is this: “In the world you will have tribulation, but take heart; I have overcome the world” (Jn 16:33). The message of Fatima invites us to trust in this promise.
Wednesday, April 2nd, will be the anniversary of the death of the Servant of God Pope John Paul II in 2005. Friday, April 4th, will be the anniversary of the death of Blessed Francisco Marto in 1919, and of Saint Gaetano Catanoso, the Apostle of the Holy Face, in 1963. Saturday, April 5th, will be the First Saturday of the month. I’m looking forward to a very special week.