An Adorer of the Blessed Sacrament
Saint John Nepomucene Neumann (1811–1860), Bishop of Philadelphia from 1852–1860, was graced with an intense devotion to Our Lord in the Sacrament of the Most Holy Eucharist. His personal experience as a boy in Bohemia (modern Czech Republic), then as a priest in the United States, and finally as a Redemptorist, — a spiritual son of the incomparable Saint Alphonsus Liguori — impelled him to promote prolonged prayer before the Blessed Sacrament exposed in the monstrance. No sooner had he become bishop of Philadelphia than he sought to introduce the Quarant’ Ore, or Forty Hours Devotion, already practiced for three hundred years in Europe, to the Church in the United States.
Clerical Resistance
The good priests of Philadelphia were, for the most part, opposed to the introduction of the Forty Hours Devotion, fearing that, given the prevailing climate of violent anti-Catholicism nurtured by the Know Nothing Movement, it might exacerbate hostilities against the Church and even expose the Most Holy Sacrament to profanation. 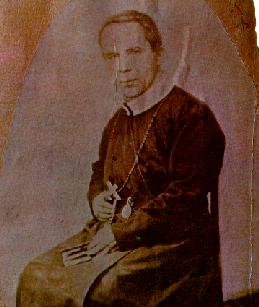 Heaven Gives a Sign
Bishop Neumann had very nearly renounced his project when, overcome by exhaustion late one night, he fell asleep while writing at his desk. A burning candle ignited the papers lying before him. He awoke to smoke rising from the incinerated papers. One document alone remained unscathed; it was the letter he had written to propose the Forty Hours Devotion. Bishop Neumann fell to his knees to give thanks for having been preserved from harm and, as he did so, he experienced a kind of locution. God spoke to him inwardly saying, “As the flames are burning here without consuming or injuring this writing, so shall I pour out My grace in the Blessed Sacrament without prejudice to My honor. Therefore, do not fear profanation, and do not hesitate any longer to carry out your designs for My glory.”

Bishop Neumann Goes Ahead
Convinced by this sign, Bishop Neumann overrode the objections of his clergy and initiated the celebration of the Forty Hours at the First Diocesan Synod of Philadelphia in April 1853. The Church chosen for the first Forty Hours was that of Saint Philip Neri.. It was the latter saint who had, in fact, introduced the Quarant’ Ore to the city of Rome. Bishop Neumann astonished — and edified — his clergy and faithful by spending the greater part of the three days on his knees before the Blessed Sacrament in Saint Philip Neri Church. There was no anti-Catholic backlash. Great crowds of the faithful came, by day and by night, to adore Our Lord exposed to their gaze in the Sacrament of the Altar.
The Forty Hours Ratified
Bishop Neumann carried out his original inspiration by organizing the Forty Hours Devotion in the entire diocese of Philadelphia in such a way that each parish would celebrate it in turn during the course of the year. He edited a booklet to facilitate the worthy celebration of the Quarant’ Ore, and secured indulgences for the faithful who would participate in the devotion. So successful was the Forty Hours in the diocese of Philadelphia that it spread from there to other dioceses of the United States. In 1866 at the Plenary Council of Baltimore the Forty Hours Devotion was ratified for the whole country.
The Challenge Today
One of the conclusions of the 2005 Vatican Synod on the Eucharist was the recommendation that the Forty Hours Devotion be reinvigorated and reintroduced everywhere in the Church. This, of course, is fully consonant with the repeated exhortations to Eucharistic adoration of Pope John Paul II and Pope Benedict XVI.
Saints John and Alphonsus
Saint John Neumann left, among his personal writings, a prayer that, by its language and tenderness, is reminiscent of the outpourings of his spiritual father, Saint Alphonse Liguori, in the presence of the Blessed Sacrament. It reveals something of the soul of Bishop Neumann:
How much do I love Thee, O my Jesus!
I wish to love Thee with my whole heart, yet I do not love Thee enough.
I have but one desire: that of being near Thee in the Blessed Sacrament.
Thou art the sweet Bridegroom of my soul.
My Jesus, my love, my all, gladly would I endure
hunger, thirst, heat, and cold
to remain always with Thee in the Blessed Sacrament.