The Other Marian Jubilee in 2008
2008 is the Jubilee Year of Lourdes: 150 years since the apparitions to Saint Bernadette. 2008 also marks the 75th anniversary of the first apparition of the Holy Mother of God, the Virgin of the Poor, at Banneux in Belgium on January 15th, 1933. From January 15th to March 2nd, 1933, Our Lady appeared eight times to eleven year old Mariette Béco. On August 22nd, 1949 Monseigneur L. K. Kerkhofs, Bishop of Liège, declared the apparitions and the message authentic and worthy of belief. After the apparitions, Mariette Béco married and raised a family, never seeking to draw attention to herself. 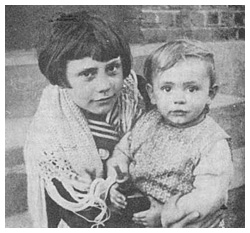 Virgin of the Poor
At Banneux, the Blessed Virgin revealed herself under two names. On January 19th, 1933, she said to little Mariette Béco, “I am the Virgin of the Poor.” On the following March 2nd, she added, “I am the Mother of the Saviour, the Mother of God.” Three times in the course of the apparitions, the Blessed Virgin asked Mariette to pray much. On Saturday, February 11th, she said, “I come to relieve suffering.”
Priez beaucoup
Our Lady’s invitation to pray much is at the heart of her message at Banneux. The Rosary remains the simplest and most effective way to pray much, to “pray always and not lose heart” (Lk 18:1). The Rosary, being the form of prayer most suited to the little, the weak, and the poor, is always pleasing to the Virgin of the Poor. To pray it well one need not pray it perfectly. One who puts off praying for fear of not praying well enough, will eventually abandon prayer altogether. Pray as you can, and not as you think you should.
The Decision to Pray
What matters is the decision to pray, symbolized by taking one’s beads in hand. “The Spirit also helpeth our infirmity. For we know not what we should pray for as we ought; but the Spirit himself asketh for us with unspeakable groanings” (Rom 8:26). All the rest follows: the evocation of the mysteries; the Our Father at the beginning of each decade, the sweet repetition of the Hail Mary with its praise of the Name of Jesus, and the Glory be to the Father that, again and again, plunges the soul into adoration of the Trinity. A commitment to pray the Rosary daily is the best way to commemorate the Marian Jubilees of 2008.