Skip to content
HomeHomiliesAnd Again He Began to Teach 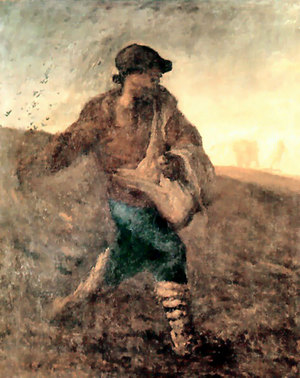 Week of Sexagesima
Third Wednesday of the Year II
Mark 4:1-20
Behold, the Sower Went Out to Sow
Our Lord presents four situations to those who would hear His teaching: (1) the seed that falls on the path, (2) the seed that falls on rocky ground, (3) the seed that falls among thorns, and (4) the seed that falls into good soil.
The Vice of Routine
The seed of the Word falls on the path when it is received superficially. It lies on the surface; the earth does not open to take it in. Satan, like a great noisy flock of birds, swoops down to carry away the seed before it can sprout and take root. The defect here is in the superficial hearing of the Word, in a lack of intentional listening. Routine, that perennial vice of the devout, is the most common cause of this. Routine sets in where there is a lack of vigilance and a certain unwillingness to be surprised by the Word in its newness.
Hear What God Has to Say
The remedy is a lectio that is intentional and intelligent, humble and watchful. “I will hear what the Lord God has to say” (Ps 84: 9), says the psalmist. Listen to the reading of the text, ready to be surprised by the Word. Say, “O God, suffer not that Thy Word should strike my ears without piercing my heart. Open my mind and heart to receive whatever seed falls from the hand of the Sower.”
Fits of Fervour
The seed of the Word falls on rocky ground when it is received in fast-fading fits of fervour. Yes, fits of fervour fade fast. Instability in the face of temptations, contradictions, and failures, prevents the Word from taking root. One must be steady in hearing the Word. Paul’s words to Timothy apply as much to the practice of lectio divina as they do to the ministry of preaching: “in season and out of season” (2 Tim 4:2). The remedy is in meditatio: in the persevering repetition of the Word “day and night” (Ps 1:2). The regular psalmody of the Divine Office is immensely helpful in this regard. Falling steadily, the Word can pulverize even the stoniest of hearts.

Thorns
The seed of the Word falls among thorns when it is received in a heart choked by worries, anxieties, and fears. Some are driven by the need to control every situation, others by the need to possess and then to defend what, pathetically, they see as their own. “The just man’s few possessions are better than the wicked man’s wealth” (Ps 36:16). Only the poor in spirit are free of the overgrowth of cares and insecurities that, like the proliferation of thistles in a field, can invade the heart and take it over. The remedy is in oratio: in a prayer full of confidence that dares to say with the psalmist, “What else have I in heaven but Thee? Apart from Thee I want nothing on earth” (Ps 72:25).
Fruitfulness
The seed of the Word falls on good soil when sown in a heart made ready by lectio, meditatio, and oratio. Contemplatio, the work of the Holy Spirit in us, causes seed scattered by the hand of Christ to germinate, take root, and bear fruit to the glory of the Father, “thirty-fold and sixty-fold and a hundred-fold” (Mk 4:20).