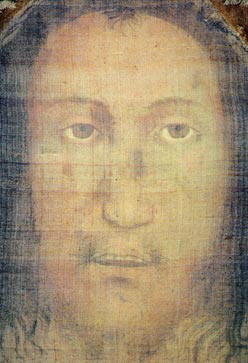 Twenty-Second Friday of the Year I
Colossians 1:15-20
Christ Jesus is the image of the invisible God,
the firstborn of every creature:
For in Him were all things created in heaven and on earth,
visible and invisible,
whether thrones, or dominations,
or principalities, or powers:
all things were created by Him and in Him.
And He is before all, and by Him all things consist.
And He is the head of the body, the church,
who is the beginning, the firstborn from the dead;
that in all things He may hold the primacy:
Because in Him, it hath well pleased the Father,
that all fullness should dwell;
And through Him to reconcile all things unto himself,
making peace through the blood of his cross,
both as to the things that are on earth,
and the things that are in heaven.
Doxological Christology
Today’s passage from the Letter to the Colossians is well known to us. Some of you may even know it by heart. In our monastic cursus of the Divine Office it is the New Testament canticle at Vespers on Thursday of the Second Week; in the Roman Office, it occurs as the New Testament Canticle at Vespers every Wednesday. It is, in fact, a hymn inspired by the Holy Spirit, addressed to the Father, in celebration of the mystery of Christ, a wonderful example of “doxological Christology.”
Thanksgiving
In praising the glory of the Father — the mystery of the Son comes into focus to “enlighten the eyes of the heart” (Eph 1:18). The hymn englobes the whole “economy” of God: redemption, creation, the resurrection and lordship of Christ and, at the end of the text, a confession of the mystery of the Cross, radiating peace over heaven and earth (Col 1:20).
Through Him
Perhaps you noticed that, although the whole hymn celebrates Jesus Christ, He is never explicitly named. Instead, all throughout, the pronoun “He” is repeated again and again. The effect is not at all unlike that of the, “Through Him, with Him, and in Him . . .” that concludes the Eucharistic Prayer.
Indeed Right and Fitting
This is not the only point of resemblance with the Eucharistic Prayer. If you take the text on your own, in lectio divina, and repeat it slowly, you will see that it is crafted like the Roman Preface of the Mass. In fact, if you put the traditional opening of the Roman Preface at the beginning — It is indeed right and fitting, it is our duty and leads to our salvation, that we should praise you always and everywhere, Lord, holy Father, almighty and ever-living God, through Christ our Lord — and if you add, at the end, the traditional conclusion of the preface — And therefore, together with all the Angels, we never cease to praise and glorify you, as we joyfully proclaim, Holy, Holy, Holy — you have, with very few adjustments, a magnificent Eucharistic text, a rich Christological Preface.

God’s Human Face
There is, in these eight or nine verses, an inexhaustible richness of content. If I were to linger over a single phrase, it would be verse 15. “He is the image, the icon, of the invisible God” (Col 1:15). Jesus is, to use the title of Cardinal von Schönborn’s book, “God’s Human Face.” “No one has ever seen God,” says Saint John the Theologian; “the only Son, who is in the bosom of the Father, He has made Him known” (Jn 1:18). Jesus Himself says, “He who has seen me has seen the Father” (Jn 14:9), and Saint Paul adds that God “has shone in our hearts to give the light of the knowledge of his glory in the Face of Christ” (2 Cor 4:6).
The Eucharistic Revelation of His Face
Today’s message from Colossians moves us to seek the Face of Christ. One who desires to contemplate the Face of Christ needs to immerse himself in the psalms, the prophets, the Gospels, Saint Paul, and the saints and mystics of every age. One who desires to contemplate the Face of Christ needs to spend time, silent and adoring, before the mystery of the Most Holy Eucharist. And so, we go from the ambo to the altar, where “the Blood of the Cross” (Col 1:20) is given us to drink, and where the Face of Christ, at once hidden and revealed, satisfies the heart’s desire.