Tuesday of the Eighteenth Week of the Year I 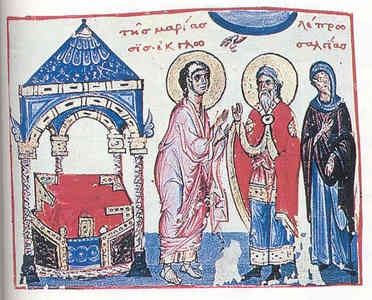 Numbers 12:1-13
Psalm 50:1-2, 3-4ab, 4cd-5, 10-11
Mt 14:22-36
Miriam and Aaron
Together with Moses, Miriam and Aaron had experienced the wonderful deeds of the Lord: the liberation from Egypt, the crossing of the Red Sea and the drowning of Pharaoh with his chariots and his horsemen in the waters of the sea. It was on that occasion that Miriam took a timbrel in her hand and danced to the glory of the Lord, singing: “Sing to the Lord, for he has triumphed gloriously; the horse and the rider he has thrown into the sea” (Ex 15:21). Miriam and Aaron witnessed the wonder of manna from heaven. They had supported their brother Moses in his leadership of the people. A certain resentment however seems to have been festering in their hearts, a jealousy of Moses, and especially of his intimacy with the Lord.
Jealousy
As is so often the case, they look for a pretext, for an excuse to speak against him. They find it in Moses’ marriage to a Cushite woman, a stranger, Zipporah, the daughter of Jethro of Midian. Now this marriage is no recent event. You recall that Moses married Zipporah after he had killed the Egyptian, and fled in fear from Pharaoh’s house, before the call of Moses by God, speaking from the burning bush on Mount Horeb (Ex 2:1). Zipporah has been with him for a long time. It is strange that Miriam and Aaron should only now be saying that they have a problem with their brother’s marriage, but jealousy makes people do strange things. Moses hears them speaking against him. Surely, it hurts him, this turning against him of both brother and sister.
The Meekness of Moses
It is here that we encounter the famous verse on the meekness of Moses. “Now the man Moses was very meek, more than all men that were on the face of the earth” (Num 12:3). We saw the violent side of Moses in the second chapter of Exodus, but that was before his transforming encounter with God in the burning bush. Here Moses is presented as a man who is humble before God. The experience of divine intimacy has chastened him and made him lowly and meek. We see here that humility is a fruit of adoration, adoration being the response of faith to the revelation of God.
Meekness: the Fruit of Adoration
Adoration, particularly Eucharistic adoration, makes one humble, and humility is the ground of every other virtue. If we are resentful, angry, judgmental and unforgiving, it is because we are not humble. We are not humble because we do not adore. Saint Peter Julian Eymard, whom we celebrated last week, saw adoration of the Blessed Sacrament as the great remedy for the wounds of the Church and the brokenness of society, precisely because adoration produces humility, and humility produces peace.
Defender of the Lowly and the Meek
God defends Moses against the spiteful gossip of his brother and sister. God is always the defender of the lowly and the meek. He summons all three to a family conference at the tent of meeting. The Lord descends in a pillar of cloud and orders Miriam and Aaron to come forward. How they must have trembled! God describes His relationship to Moses. “He is entrusted with all my house. With him I speak mouth to mouth, clearly, and not in dark speech; and he beholds the form of the Lord” (Num 12:8).

Miriam Covered With Leprosy
The anger of the Lord is enkindled against Miriam and Aaron for having dared to question God’s privileged treatment of His servant Moses. Miriam is left disfigured by the experience, covered with leprosy. Aaron then turns to his brother, addressing him now as “My lord,” and begging him to intercede for Miriam’s healing. Moses does intercede. We have his prayer. It is a cry from the heart. “And Moses cried to the Lord, ‘Heal her, O God, I beseech Thee” (Num 12:13). We are not told whether or not Miriam is actually healed; we know only that she is excluded from the camp for seven days, and then readmitted. She will have learned her lesson. God is severe with murmurers and trouble-makers, and he loathes jealousy especially when it is directed to one whom he cherishes in a special way.
The Miserere
Appropriately, the responsorial psalm is the Miserere. We pray it together with Moses, Aaron, and Miriam. The leprosy of sin has disfigured all of us. Moses’ prayer for the healing of his sister is brought to perfection in the prayer of the true Moses, Jesus Christ. We turn to Jesus, asking Him to create clean hearts within us and, mindful of Miriam excluded from the camp, we pray, “Cast me not away from thy presence” (Ps 50:11).
Have No Fear
Jesus responds to our prayer in the Holy Gospel. “Cast me not away from thy presence” (Ps 50:11) finds its response in the words of Jesus, “Take heart, it is I; have no fear” (Mt 14:27). Jesus bids Peter to come to Him over the stormy waters, although the idea is Peter’s and not the Lord’s. The wind and the waves overwhelm Peter, causing him to sink into fear and doubt. Jesus stretches forth His hand and lifts him back into confidence and trust. Those in the boat worship Jesus. Their confession of faith becomes ours in this and in every Holy Mass, “Truly you are the Son of God” (Mt 14:33).

Eucharistic Healing
The Gospel ends with Jesus and the disciples coming ashore. The sick are brought to Him and they beseech Him that they might but touch the fringe of His garment (Mt 14:36). In every Mass, by hearing the Word of God and by receiving the sacred mysteries of Christ’s Body and Blood, we do more than touch the fringe of His garment. He speaks to us mouth to mouth in the Liturgy of the Word, and in the Sacrament of His Body and Blood we, more perfectly than Moses, behold the form of the Lord. We have Holy Communion with Him, a communion more intimate than anything we can imagine. He is more intimate to us than we are to ourselves. The Gospel ends with the phrase, “and as many as touched it were made well” (Mt 14:36). In the adorable mystery of the Eucharist we hold the answer to Moses heartfelt prayer, “Heal her, O Lord, I beseech thee” (Num 12:13). We are healed, not by any exclusion from the assembly, but by incorporation, by the power of the Holy Spirit, into the assembly of the faithful, the Eucharistic Body of Christ.