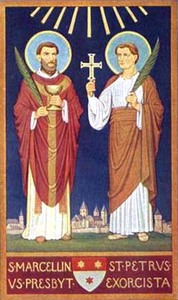 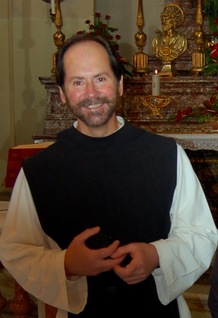 Birthday
Today, June 2nd, is my 55th birthday! When I went downstairs for collazione this morning, I discovered that Fra Bernardo Maria had baked a lovely breakfast cake for the occasion. Perfect with morning coffee!
At 8:45 Fra Ryan Maria and I set out out for the Church of Saints Marcellinus and Peter on the Via Merulana. Sister Barbara, A.S.C.J. joined us on the way. Thus did three happy Americans celebrate the festival of two glorious Roman Martyrs. After Mass, Sister Maria, a Polish religious belonging to the Congregation of the Holy Family of Nazareth, joined us outside the church. Learning that it was my birthday, she said that she had the devotion of saying as many Gloria Patris as the person being celebrated has years!
A Priest and an Exorcist
Under the Emperor Diocletian, Peter, an exorcist of the Church of Rome, was sent to prison. There he converted the jailer and his entire family to the faith of Christ. They were all baptized by the priest Marcellinus. Condemned to death by the judge Serenus, Marcellinus and Peter were beheaded after atrocious torments.
Keeping Festival
The festival of Saints Marcellinus and Peter is kept as a solemnity in their church. Hence there was a Gloria and Credo at Mass. Fra Ryan Maria read the first and second readings.
At the end of Mass, the parish priest asked me to read the traditional prayer of supplication to the Holy Martyrs. Their reliquary was set amidst crimson flowers and a blaze of candles on the altar. Romans are unabashedly devoted to their saints: a salutary lesson for those who have espoused a dreary liturgical minimalism!
Marcellinus and Peter are named in the Roman Canon. I have a longstanding devotion to the saints of the Roman Canon and it was with no little emotion that I pronounced the names of Marcellinus and Peter at Mass this morning.
Confession
After Mass I went off to the Chiesa Nuova to make my confession! A great way to celebrate 55 years of mercy upon mercy! “Confess ye unto the Lord for He is good: for His mercy endureth forever” (Ps 117:1).