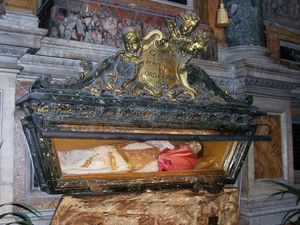 I walked to Santa Maria Maggiore this afternoon to pray before the tomb of Pope Saint Pius V. Around the tomb were burning candles and flowers in honour of his feast. Near the tomb I saw a young man totally absorbed in prayer while all around him pilgrims jostled tourists, most of whom had no idea that today was the Dominican Pope’s feast.
There were so many intentions to recommend to the intercession of Saint Pius V. He was the Pope of the 1568 edition of the Roman Breviary and of the 1570 edition of the Roman Missal. The Collect of his feast recalls that God raised him up “to provide for a liturgy more worthy” of Him.
Pius V was the Pope of the Rosary; after the victory of Lepanto he instituted the Feast of the Most Holy Rosary under the title of Our Lady of Victory on October 7th. He approved a revision of the Little Office of the Blessed Virgin Mary and added the invocation, “Help of Christians” to the Litany of Loreto.
One last thing: Saint Pius VI excommunicated Queen Elizabeth I on April 27, 1570, calling her “a heretic and a favourer of heretics.” Not one to mince words, Pius V! Surely, today, from his place in heaven, he will help with his prayers all who seek to repair the broken Body of Christ.