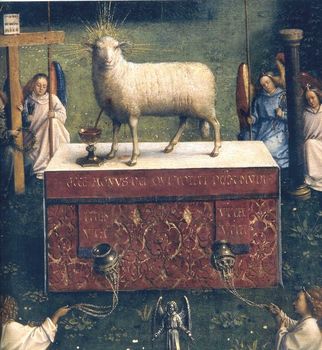 Some time ago, a remarkable young man named Sidney wrote me from Brazil to ask for a blessed Agnus Dei. I promised him that I would post something about the Agnus Dei here. It is fitting to do so as we prepare to enter Holy Week and, through the glory of the Paschal rites, the mystery of the immolated Lamb.

An Agnus Dei, so called from the image of the Lamb of God impressed on the face of it, is made of virgin wax, balsam, and chrism, blessed according to the form prescribed by the Roman Ritual.
An old Irish prayerbook (Dublin 1860) gives a prayer to be said daily by those who wear an Agnus Dei. Following the impulse given by this prayer, one who wears an Agnus Dei is compelled to “follow the Lamb wherever He goes” (Ap 14:4) in a spirit of Eucharistic victimhood, that is, of sacrificial love and oblation.

Prayer of One Who Wears an Agnus Dei

O my Lord Jesus Christ,
the true Lamb who takes away the sins of the world;
by Thy mercy which is infinite, pardon my inquities,
and by Thy Sacred Passion, preserve me this day
from all sin and evil.
I carry about me this holy Agnus Dei in Thy honour,
as a preservative against my own weakness,
and as an incentive to the practice of that meekness, humility, and innocence
which Thou hast taught us.
I offer myself up to Thee as an entire oblation,
and in memory of that Sacrifice of Love
which Thou didst offer for me on the Cross,
and in satisfaction for my sins.
Accept this oblation, I beseech Thee, O my God,
and may it be acceptable to Thee
in the odour of sweetness. Amen.

This peculiarly Roman sacramental, goes back at least as far as the ninth century. Amalarius and the Pseudo–Alcuin refer to it. The blessing of the Agnus Dei medallions used to take place at the Lateran Basilica on Holy Saturday. The archdeacon vested in a dalmatic would receive from the Pope a silver phial containing Sacred Chrism. He would pour the Sacred Chrism into a cauldron of liquid wax. The Agnus Dei medallions would be made from this blessed wax and distributed on the Sunday In Albis after the singing of the Agnus Dei at the Papal Mass.

The oldest extant Agnus Dei medallions date from the pontificates of John XXIII (1316–34) and Gregory IX (1227–41). Later on, the Roman Pontiffs reserved the blessing of the medallions to themselves, and assigned the privilege of preparing them to the Benedictine–Cistercian monks of Santa Croce in Gerusalemme.

At the Banquet of the Lamb

The sixteenth century rite for the blessing of the Agnus Dei medallions makes use of holy water, chrism, and balsam. It was the custom for the Supreme Pontiff to bless the medallions in the first year of his pontificate during the Octave of Holy Pascha, and to bless them every seven years thereafter. The ceremony consisted of three orations addressed to the Father, the Son, and the Holy Spirit. Thus would he bless the medallions themselves and the water mixed with chrism and balsam into which they would be plunged. When the medallions were removed from the water the Paschaltide Vespers hymn, Ad Cenam Agni Providi would be sung. The same blessing was repeated as often as necessary according to need, and also on special solemnities or anniversaries. Every element of the confection and blessing of the Agnus Dei contributes to its mystical significance. 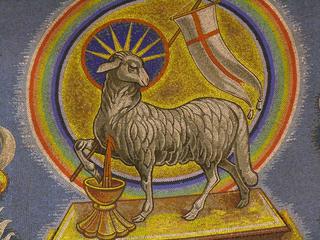 In the wake of the Second Vatican Council, the Agnus Dei was one of those treasured sacramentals that fell into disuse. It is, I think, time to restore the solemn blessing of the Agnus Dei and recover the use of so precious a sacramental. The Church stands in need of “friends of the Lamb,” and of Eucharistic victim souls who will follow the Lamb in purity, in humility, in silence, and in the oblation of themselves.