Skip to content
HomeUncategorizedSaturday Morning Walk and Some Liturgical Notes 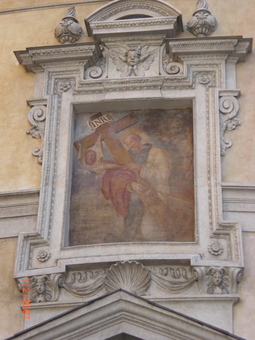 This fresco of Saint Bernard adorns the facade of San Bernardo alle Terme. Click to enlarge it. Note that Saint Bernard is carrying the image of the Holy Face suspended from the Cross and the red cloak of derison worn by Our Lord when He was crowned with thorns. The Title on the Cross is very prominent. A major fragment of the Title is preserved and venerated at Santa Croce in Gerusalemme. The other insignia of the Passion of Christ surround Saint Bernard.
The feast of the Invention (Finding) of the Title of the Most Holy Cross is celebrated at Santa Croce in Gerusalemme on 19 January with a proper Mass and Office. The liturgy of the feast is, from beginning to end, a contemplation of Jesus, the Crucified King. How interesting that this feast of the Passion of Christ should occur within the period of Christmastide, at least as it is popularly observed in Rome! This particular feast is one of several celebrated at Santa Croce in honour of the mysteries of the Sacred Passion.
In preparation for the feast of 19 January I did some research in our Sessorian Library and found a manuscript containing the proper antiphons of the Office. I also found a 19th century printed edition of the Office of the Finding of the Title of the Most Holy Cross. The feast was originally kept on the last Sunday of January. It is described as being for the Benedictine–Cistercian monks attached to the Sacred Sessorian Basilica of the Holy Cross in Jerusalem.
While much of the Office is borrowed from that of the Exaltation of the Holy Cross on September 14th, there are elements proper to the commemoration of the Title.
The Capitulum at Vespers is taken from Colossians 2:13–14:
And you, when you were dead in your sins, and the uncircumcision of your flesh; he hath quickened together with him, forgiving you all offences: Blotting out the handwriting of the decree that was against us, which was contrary to us. And he hath taken the same out of the way, fastening it to the cross. 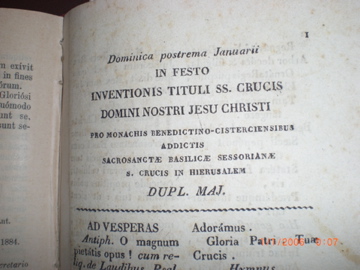 The Collect:
O Lord Jesus Christ, our King,
Who willed to adorn this Sacred Basilica
with the Title of Thy Most Holy Cross,
grant to us Thy servants, we beseech Thee,
that we may so celebrate the memory of this Thy Passion,
as to attain to the blessed fruits of that same Passion.
Who livest and reignest. 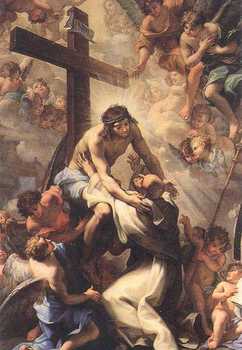 Inside the Church of San Bernardo alle Terme is this magnificent painting of Saint Bernard being embraced by the Crucified Jesus.
The Invitatory Antiphon:
Jesus of Nazareth, our Crucified King:
Come, let us adore.
The Benedictus Antiphon:
Many of the Jews read this Title,
for the place where Jesus was crucified was near the city,
and it was written in Hebrew, in Latin, and in Greek (Jn 19:20).
The Magnificat II Antiphon:
Pilate also wrote a Title and put it on the cross;
it read, “Jesus of Nazareth, the King of the Jews” (Jn 19:19).