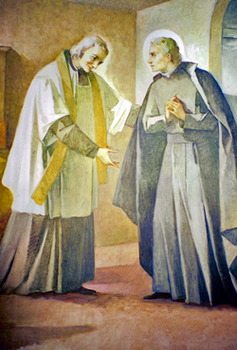 The Saints in Our Lives
The saints come into our lives, each one with a particular mission. We do not choose the saints to whom we are devoted in a special way; it is they who, in obedience to a mysterious design of God, make themselves known and devote themselves to us. This is something I have experienced over and over again. When a particular saint offers me the gift of his or her friendship, it is because God chooses, through this saint, to teach me something, to offer me a particular gift or, quite simply, to give me a heavenly companion for my journey, a counselor, and a friend.
Saint Peter Julian Eymard, Apostle of the Eucharist
Last December I was given a first class relic of Saint Peter Julian Eymard. Then, several trips to the Italian Consulate in Manhattan gave me the opportunity to pray in the magnificent Church of Saint Jean–Baptiste. The Church contains an altar dedicated to Saint Peter Julian and an important relic. Saint Peter Julian Eymard seemed to be approaching me with a message and with a gift.
I just finished reading two biographies of the saint; both books are in Italian. I found them here in the abbey library. San Pietro Giuliano Eymard, Apostolo dell’Eucaristia by Quirino Moraschini and Mondolfo Pedrinazzi, S.S.S. (Roma 1962), and Il Beato Pietro Giuliano Eymard by Paolo Dott. Fossati, Sacerdote Adoratore (Milano 1925).
What I found most striking is this particular teaching of Saint Peter Julian Eymard. Excuse my translation from the Italian, itself a translation from the French.
“The secret for arriving quickly at a life centred in the Eucharist is, during a certain period of time, to make Jesus in the Most Holy Sacrament the habitual object of the exercise of the presence of God, the dominant motive of our intentions, the meditation of our spirit, the affection of our heart, the object of all our virtues. And if the soul is generous enough, one will come at length to this unity of action, to familiarity with the adorable Sacrament, to think of it with as much and even greater ease than of any other object. Easily and gently one’s heart will produce the most tender affections. In a word, the Most Holy Sacrament will become the magnet of devotion in one’s life and the centre of perfection of one’s love. Eight days would be enough for a simple and fervent soul to acquire this Eucharistic spirit; and even if one should have to put weeks and months to acquire it, can this ever be compared with the peace and the happiness which this soul will enjoy in the Divine Eucharist?”
A Eucharistic “Conversion of Manners”
What exactly is Saint Peter Julian Eymard saying here? To use the classic Benedictine expression, he is talking about a conversatio morum, a Eucharistic conversion of the way one lives, a turning toward the mystery of the Eucharist. the first expression of this Eucharistic conversion will be the re–ordering of one’s priorities beginning with the organization of one’s day. He is suggesting an intensive eight–day exposure to the healing radiance of the Most Holy Eucharist.
Power Comes Forth From Him
I have always loved the Communion Antiphon Multitudo languentium (p. 471 in the Graduale Romanum). The theological and musical summit of the antiphon is in the last line: Quia virtus de illo exibat et sanabat omnes. “For power came forth from Him and healed them all” (Lk 6:19). The fact that the liturgy makes us sing this text during Holy Communion tells us that healing power radiates from the Body and Blood of Christ received from the altar, and contemplated and adored in the tabernacle and in the monstrance. Saint Peter Julian Eymard is suggesting that eight days of conversion, i.e. of turning toward the Most Holy Eucharist is sufficient to begin the healing of one’s heart and the renewal of one’s life.
Bringing the Messy Bits to Adoration
My friend Lisa H. is famous for counseling folks with problems of all sorts to bring them to Eucharistic adoration. Lisa is 100% right. Bring your whole life to adoration, especially the messy bits, the very parts that you would be tempted to hide or disown. Bring your broken heart and your wounds to adoration. Try it for eight days. It will be the beginning of a Eucharistic conversatio morum.

Saint Peter Julian Eymard (1811–168) was particularly close to me this past August 2nd, his liturgical feastday. I preached on him at the Monastery of the Glorious Cross in Branford, Connecticut. This is what I said: 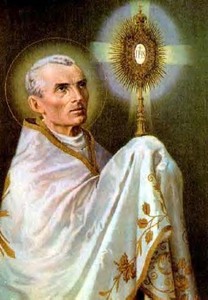 “Saint Peter Julian Eymard is the second of the three holy priests the Church sets before our eyes this week in a kind of Eucharistic triptych. All three saints — Alphonsus Liguori, Peter Julian, and Jean–Marie Vianney — illustrate the Servant of God Pope John Paul II’s message to priests at the beginning of the Year of the Eucharist:
Dear priests, who repeat the words of consecration each day, and are witnesses and heralds of the great miracle of love which takes place at your hands: be challenged by the grace of this special year; celebrate Holy Mass each day with the same joy and fervour with which you celebrated your first Mass, and willingly spend time in prayer before the tabernacle (Mane Nobiscum, Domine, art. 30).
I cannot help but relate Pope John Paul’s exhortation to what the prophet Jeremiah declares in today’s first reading. The Pope addressed himself to all priests saying, “Dear priests, who repeat the words of consecration each day. . . .” Jeremiah says, “Your words were found and I ate them, your words became to me a joy and the delight of my heart; for I am called by your name, O Lord, God of Hosts” (Jer 15:16). For Saint Peter Julian the words that he found and ate, the words that became to him a joy and the delight of his heart, were these words:
Take this all of you, and eat of it, for this is my Body, which will be given up for you. Take this all of you and drink from it, for this is the cup of my Blood, the Blood of the new and eternal covenant; it will be poured out for you and for all for the forgiveness of sins. Do this in memory of me.
So long as these words remain a priest’s joy and the delight of his heart, he will, like Saint Peter Julian, like Saint Alphonsus and Saint Jean–Marie Vianney, fulfill Pope John Paul II’s exhortation to “celebrate Holy Mass each day with the same joy and fervour with which he celebrated his first Mass, and willingly spend time before the tabernacle.” For those called to pray for all priests, these same words of consecration must also become “a joy and the delight of their heart” (Jer 15:16).
This was the very ideal of Eucharistic holiness that Mother Marie des Douleurs presented to the priests who came to her for direction in the 1930s. Here are her own words: “ Since they should neither want to live themselves nor give life to souls except from the Sacrifice of Our Lord, there should be nothing closer to their hearts than to celebrate Mass well. Their whole life must be oriented to the Mass.” Saint Peter Julian Eymard would have been in complete agreement with her.
Saint Peter Julian’s Eucharistic vocation unfolded amidst sufferings of the heart and painful detachments. God called him out of the religious family he loved — the Marist Fathers — to begin a new work, a Cenacle entirely devoted to the Blessed Sacrament. From the beginning this new Eucharistic work comprised priests, consecrated women, and laity. He challenged his little family of adorers to set souls ablaze with Eucharistic fire.
For Peter Julian, adoration of the Blessed Sacrament had an apostolic dimension. He reached out, in particular, to poor adolescents and adults who, for one reason or another, had not received their First Holy Communion, and to “fallen priests,” those unfortunate priests who, out of weakness, found themselves cut off and living in a state of spiritual, emotional, and often material, misery. The very same needs exist today, one hundred-fifty years later.
The number of baptized Catholics who have never received their First Holy Communion is staggering. Who will reach out to them? Who will take them by the hand and lead them to the altar? The preparation of young people and adults for their First Confession and Holy Communion is an urgent work, and one that the Heart of Jesus burns to see carried out.
And what of so many “fallen priests” cast aside, and living in dejection with no one to care for them spiritually? Saint Peter Julian understood that Our Lord was asking him to minister to troubled priests and guide them back to the altar, that is, to spiritual health and to holiness. Jeremiah’s prophecy holds out a series of consoling promises for priests who have fallen: “If you return I will restore you, and you shall stand before me. If you utter what is precious, and not what is worthless, you shall be as my mouth” (Jer 15:19).
In the Blessed Sacrament Saint Peter Julian Eymard recognized “the treasure hidden in the field” (Mt 13:44) and “the pearl of great price” (Mt 13:46). He gave up all that he had to possess the mystery of the Eucharist and to be possessed by it. Peter Julian Eymard is a saint for the Church today: a Church called to rediscover Eucharistic adoration and to live “from the altar and for the altar”; a Church that will be incomplete so long as so many of the baptized are not receiving the Sacred Body and Precious Blood of Christ; a Church suffering in priests who broken and wounded with no one to care for their souls. Saint Peter Julian, share with us your passion for the Eucharist, that we may be made worthy of the promises of Christ!”