“In human affairs we must be content to do the best we can and then abandon ourselves to Providence, which will heal our human faults and shortcomings.”
Blessed Pius IX 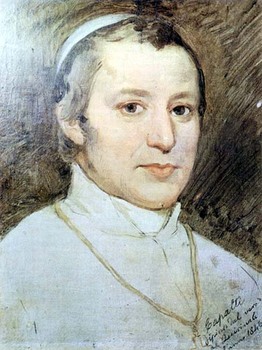 Pius IX, Newman, and Santa Croce in Gerusalemme
In 1847 Blessed Pius IX sent John Henry Newman and six other Englishmen to live at the Abbey of Santa Croce in Gerusalemme while preparing together for life in the English Oratory.
Mr. Bowles, one of Newman’s companions in Rome wrote: “Pius IX chose Santa Croce as the place where we should all go, the Pope himself calling it un bel sito — a beautiful situation, which it certainly was. We were then Newman, St. John, Penny, Dalgairns, Coffin, Stanton, and myself. We had a whole wing of the monastery on the upper floor to ourselves with a kitchen and man cook, an Italian named Michele, as servant, and a dining room to ourselves on the ground floor. Father Rossi was appointed, by the Pope, from the Oratory in Rome, to be our Novice Master. He also had his room on the same floor, and there was a recreation room also, which was also the Chapel, with an Altar in it.”
John Paul II on Pius IX
Blessed Pius IX was beatified by Pope John Paul II on 3 September 2000. His liturgical memorial occurs on 7 February. Read what Pope John Paul II said about his sintly predecessor:
“Listening to the words of the Gospel acclamation: ‘Lord, lead me on a straight road’, our thoughts naturally turn to the human and religious life of Pope Pius IX, Giovanni Maria Mastai Ferretti. Amid the turbulent events of his time, he was an example of unconditional fidelity to the immutable deposit of revealed truths. Faithful to the duties of his ministry in every circumstance, he always knew how to give absolute primacy to God and to spiritual values. His lengthy pontificate was not at all easy and he had much to suffer in fulfilling his mission of service to the Gospel. He was much loved, but also hated and slandered.
However, it was precisely in these conflicts that the light of his virtues shone most brightly: these prolonged sufferings tempered his trust in divine Providence, whose sovereign lordship over human events he never doubted. This was the source of Pius IX’s deep serenity, even amid the misunderstandings and attacks of so many hostile people. He liked to say to those close to him: ‘In human affairs we must be content to do the best we can and then abandon ourselves to Providence, which will heal our human faults and shortcomings’.
Sustained by this deep conviction, he called the First Vatican Ecumenical Council, which clarified with magisterial authority certain questions disputed at the time, and confirmed the harmony of faith and reason. During his moments of trial Pius IX found support in Mary, to whom he was very devoted. In proclaiming the dogma of the Immaculate Conception, he reminded everyone that in the storms of human life the light of Christ shines brightly in the Blessed Virgin and is more powerful than sin and death.”