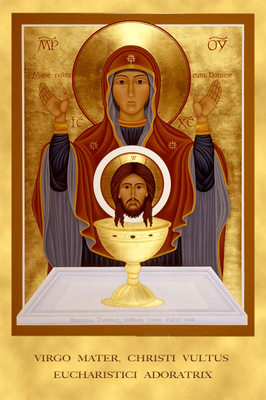 More than one reader asked for a fuller explanation of the icon of the Virgin Mother, Adorer of the Eucharistic Face of Christ. The following essay is an attempt to respond to that request.
In his encyclical Ecclesia de Eucharistia, the Servant of God, Pope John Paul II drew the eyes of the Church to the Face of Christ in the sacrament of the Eucharist. He coined a new phrase, one not encountered before in his writings or in the teachings of his predecessors, “the Eucharistic Face of Christ.” Thus did Pope John Paul II share with the Church his own experience of seeking, finding, and adoring the Face of Christ in the Eucharist.
“To contemplate the face of Christ, and to contemplate it with Mary, is the ‘programme’ which I have set before the Church at the dawn of the third millennium, summoning her to put out into the deep on the sea of history with the enthusiasm of the new evangelization. To contemplate Christ involves being able to recognize Him wherever He manifests Himself, in His many forms of presence, but above all in the living sacrament of His Body and Blood. The Church draws her life from Christ in the Eucharist; by Him she is fed and by Him she is enlightened. The Eucharist is both a mystery of faith and a ‘mystery of light.’ Whenever the Church celebrates the Eucharist, the faithful can in some way relive the experience of the two disciples on the road to Emmaus: ‘their eyes were opened and they recognized Him’ (Lk 24:31). . . . I cannot let this Holy Thursday 2003 pass without halting before the ‘Eucharistic face’ of Christ and pointing out with new force to the Church the centrality of the Eucharist.” 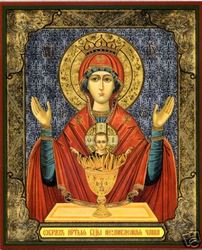 The icon depicts the Mother of God as she is shown in the familiar icon of the Sign, as well as in the much–loved Russian icon of the Mother of God of the Inexhaustible Chalice. The icon of the Sign is among the most venerated icons of the Mother of God. The ancient gesture of praying with upraised hands is seen in frescoes in the catacombs. It evokes the mystery of the Ecclesia Orans, the Praying Church, personified here in the Mother of God. The same ancient gesture of intercession became, in the late Middle Ages, a popular expression of adoration at the elevation or showing of the Sacred Host.
Whereas in icons of the Sign, Christ is depicted enclosed in a mandorla or nimbus of divine light on the Virgin’s breast, in this icon the Eucharistic Face of Christ shines from the Sacred Host suspended above the Holy Chalice on the altar. The Mother of God stands at the altar presenting the Eucharistic Face of her Son to the Eternal Father, saying, “Behold, O God our Protector; look upon the Face of your Christ” (Ps 83:10). At the same time she presents the Eucharistic Face of her Son to the eyes of all who seek Him in the Holy Mysteries. Looking out towards us, she calls us to the contemplation and adoration of the Face of Christ at once concealed and revealed in the Sacrament of the Altar. 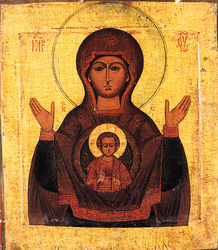 “The contemplation of Christ has an incomparable model in Mary. In a unique way the Face of the Son belongs to Mary. It was in her womb that Christ was formed, receiving from her a human resemblance which points to an even greater spiritual closeness. No one has ever devoted himself to the contemplation of the Face of Christ as faithfully as Mary.”
The blood-red mantle of the Virgin frames the Body and Blood of Christ, recalling that she “became in some way a tabernacle — the first tabernacle in history — in which the Son of God, still invisible to our human gaze, allowed Himself to be adored.” “Mary is a woman of the Eucharist in her whole life. The Church, which looks to Mary as a model, is also called to imitate her in her relationship with this most holy mystery.”
Above the uplifted hands of the Mother of God is inscribed the prayer of the disciples to the Wayfarer on the on the road to Emmaus: Mane nobiscum, Domine, “Stay with us, Lord” (Lk 24:29). This is the phrase that Pope John Paul II gave the Church at the beginning of the Year of the Eucharist in 2004. The same inscription is found on the medal of the Holy Face of Jesus diffused by the Servants of God, Mother Maria-Pierina De Micheli and Benedictine Abbot Ildebrando Gregori. The Mother of God sustains the Church in praying, Mane nobiscum, Domine, and teaches the Church to treasure in her heart the promise of Christ’s abiding presence in the Eucharist: “Behold, I am with you always, to the close of the age” (Mt 28:20).
The altar in the icon represents every altar in the world where the Most Holy Body and Blood of Christ are offered in the Holy Sacrifice and given in Communion. The words, Illumina, Domine, vultum tuum super nos, “Lift up, O Lord, the light of your face upon us” (Ps 66:1), also inscribed on the medal of the Holy Face of Jesus, appear on the front of the altar. In this Eucharistic context, the ancient prayer of the psalmist is wondrously fulfilled. The altar is the place from which the Eucharistic Face of Christ shines with a divine radiance that penetrates every darkness.