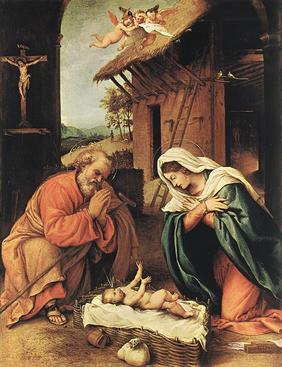 This is an extraordinary painting of the Nativity, principally because of the crucifix on the rustic shelf inside the stable. It is the work of Lorenzo Lotto (1480–1556). The nakedness of the Child in the manger presages His nakedness on the cross. His arms are outstretched in the manger as on the cross. In Bethlehem, the Virgin Mother and Saint Joseph contemplate Him; on Calvary the Virgin Mother and Saint John will look upon Him pierced.

According to an ancient monastic tradition, there is no homily at the Mass of Christmas Day. The Prologue of Saint John — the mystery of the Word out of silence — calls for an adoring silence. In some monasteries the Prologue of Saint John is sung to an exquisite First Mode melody. The Prologue is a Gospel that simply has to be sung. And after it, there has to be silence. After the Word — no other words. Tacere et adorare.

Saint John the Theologian presents us with the ineffable mystery of the Word: the Word facing the Father from all eternity; the Word made flesh, pitching his tent among us, that we might see his glory. Before the glory of the Word, all other words fall silent. In the presence of the Word, human discourse stammers and fails. Silence alone is worthy of the mystery.