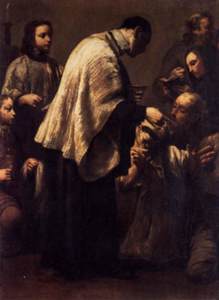 Votive Mass In Thanksgiving to God
1 Kings 8:55-61
Psalm 144: 2-3, 4-5, 6-7, 8-9, 10-11
John 15:9-17
“Solomon stood before the altar of the Lord in the presence of all the assembly of Israel, and spread forth his hands toward heaven” (1 K 8:22); and said, “Blessed be the Lord who has given rest to His people Israel, according to all that He promised; not one word has failed of all His good promise” (1 K 8:56). Solomon standing in prayer before the altar is a figure of Christ, the King of Peace, the Eternal High Priest who, according to the Letter to the Hebrews, “is able to save those who draw near to God through Him, since He always lives to make intercession for them” (Heb 7:25). Solomon stands before the altar with his hands spread toward heaven; he is already the image of every priest of the New Covenant who, configured to Christ, adopts that very same posture at the moment of the Great Thanksgiving that is the Mass.
The royal priestly prayer of Solomon is brought to perfection in the prayer of Christ; the prayer of Christ is perpetuated and actualized in the Eucharistic action, the Thanksgiving of the Church. “Do this in remembrance of me” (Lk 22:19), He said; and so she does. “Was ever another command so obeyed? For century after century, spreading slowly to every continent and country and among every race on earth, this action has been done, in every conceivable human circumstance, for every conceivable human need from infancy and before it to extreme old age and after it . . . week by week and month by month, on a hundred thousand successive Sundays, faithfully, unfailingly” (Dom Gregory Dix, The Shape of the Eucharist, p. 744).
This is the Great Thanksgiving of the Church, one, holy, catholic, and apostolic. This is the Great Thanksgiving of Jerusalem and of Antioch, of Rome, Alexandria, and Constantinople. This is the Great Thanksgiving woven into the history and culture of the Western World. This is the Great Thanksgiving that inspired men to raise altars to God and build cathedrals and churches to house them.

This is the daily Catholic Thanksgiving, the Thanksgiving offered from the rising of the sun to its setting, the Thanksgiving Sacrifice that the Father himself has given to the Church. It opens with the age-old dialogue: “Let our hearts be lifted high. We hold them before the Lord. Let us give thanks to the Lord our God. It is right and just.” When the priest goes on to sing the Preface of the Eucharistic Prayer, what does he say? “Truly, it is right and just, our duty and our salvation, always and everywhere to give you thanks, Lord, holy Father, almighty and eternal God.” The Mass is our Thanksgiving.
The Responsorial Psalm contains the verse that for over a thousand years was part of the daily monastic thanksgiving after meals: “Let all your works give you thanks, O Lord, and let your saints bless you” (Ps 144:10). Living in a Eucharistic context, the refectory is a figure of the church, the common table a figure of the altar, the thanksgiving over the table an echo of the Great Thanksgiving and a preparation for it. The same holds true of the Catholic home. The family is a domestic church, an ecclesiola; the dining room images the church; the table images the altar. The father of the family pronouncing the blessing over the table is an image of the priest. The Eucharist contextualizes all of Catholic life.
There is a profound Catholic significance in celebrating the Thanksgiving holiday on a Thursday, the day of the Eucharist. The Gospel we heard draws us into the Cenacle; liturgically, today is not merely Thanksgiving Day, the last Thursday of November. It becomes for us Holy Thursday. It is the hour of Christ’s Mystical Supper with His disciples. Christ is at table and we are there with Him.
Our Lord speaks to us; He gives us the mysteries of His Body and Blood. He calls us to fruitfulness, to the fruitfulness of sacrificial love. Thanksgiving and fruitfulness are inseparably bound up. Those who are thankful will be fruitful. Those who are fruitful will be thankful. “I chose you,” says Jesus, “and appointed you that you should go and bear fruit and that your fruit should abide” (Jn 15:16).
The Mayflower Puritans, you will remember, fled Europe to put far behind them, once and for all, altar and priest, chalice and paten, saints, feastdays, and every Popish trapping and Romish invention. The Puritans of Plymouth and of New Haven abhorred the Mass and deemed it an abomination. They judged even the Protestantized Communion Service of The Church of England by far too Catholic. The Puritans grasped the link between thanksgiving and fruitfulness but, having rejected the Mass, they had no way to express it sacramentally. The Thanksgiving festival emerged in the sacramental void of Protestantism, in a culture bereft of altar and of priest. The Puritans of Plymouth and of the New Haven Colony would be horrified to see their “Thanksgiving” observed today in a Papist nunnery with the Romish Sacrifice of the Mass!
For my part, being incurably Papistical and given to everything Romish, I see Thanksgiving Day within the greater Catholic rhythm of a life measured by the Holy Sacrifice. Catholics live from Mass to Mass, from one Great Thanksgiving to another. To be Catholic is “always and everywhere to give thanks.” To be Catholic is to live eucharistically, drawn into the prayer of Christ to the Father and the fruitfulness that comes from the Holy Ghost.
The Eucharistic life is a ceaseless thanksgiving; it is thanksgiving, semper et ubique, always and everywhere. Saint Benedict teaches us the same thing: to bless always giving primacy to the praise of God, to forswear grumbling and murmuring, so as to enter, day after day, into the thanksgiving of Christ to the Father.
We go the altar today, as we did yesterday and as we will tomorrow: to enter into the Great Thanksgiving of Christ our Eternal High Priest. We go to the altar because there is no other way for us to be fruitful, no other way to bear “fruit that will abide” (Jn 15:16). May Christ Our Lord take us to himself, and draw us after Him, beyond the veil (cf. Heb 6:19), into the presence of the Father. There it is always Thanksgiving; there is made ready for us a feasting that “no eye has seen, nor ear heard, nor the heart of man conceived” (1 Cor 2:9), the wedding feast of the Lamb (cf. Rev 19:9).