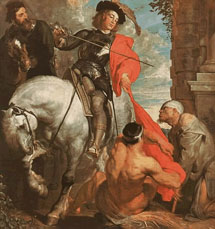 November 11
Feast of Saint Martin of Tours, Bishop
Isaiah 61:1-3abcd
Psalm 88:2-3, 4-5, 21-22, 25, 27
Matthew 25: 31-40
Today’s gospel, focusing on judgment and on the arrival of the Bridegroom-King in glory with all his angels, is perfectly adapted to the eschatological impetus given to the liturgy between November 1st and the First Sunday of Advent. In other parts of the Catholic world, a six-week Advent begins on the Sunday following the feast of Saint Martin. This is the tradition of the Church of Milan, for example. The arrival of Martin the soldier announces the arrival of Christ, the true King, the Lord of glory.
Saint Martin of Tours was the first non-martyr to be honoured with a liturgical cult, the first of a long line of “confessors” to make their way into the Church’s calendar. “Though he did not die a martyr’s death, sings the Magnificat Antiphon, this holy confessor won the martyr’s palm.” The hymn Iste Confessor was composed for the feast of Saint Martin. Holy Father Benedict himself dedicated a chapel to Saint Martin at Monte Cassino. Franciscan liturgists of the Middle Ages borrowed from the Office of Saint Martin in composing the liturgy for the feast of Saint Francis, in many cases simply changing Martinus to Franciscus.
Saint Martin was guided by the Holy Spirit through a whole succession of states of life. There is Martin the soldier, Martin the catechumen, Martin the monk, and finally, Martin the bishop. In North America, Saint Martin is often forgotten; in France, over five hundred villages and over four thousand parishes bear his name and witness to the enthusiastic piety stirred up by his memory.
In the reading from the prophet Isaiah, Martin is remembered as one filled with the Holy Spirit, as one anointed, as one sent to bring good news to the poor. He binds up broken hearts, comforts those who mourn, and puts praise in the mouths and hearts of the despondent. The Life of Saint Martin by Sulpicius Severus recounts Martin’s miracles of compassion, of conversion, of generosity, of healing. Together with Saint Athanasius’ Life of Saint Antony, the Life of Saint Martin became the standard reference for the biographers of holy men.

Saint Paul had his blinding light on the road to Damascus; Saint Martin encountered Christ in the person of a poor beggar. Drawing his sword, he cut his ample military cloak in two and covered the beggar with half of it, only to be rewarded with an apparition of the Lord Jesus, clothed in the same half- cloak, the following night.
The whole liturgy today evokes the cloak divided by a sword and given to Christ. A wondrous exchange! Saint Martin clothes the poor Christ with his cloak; Christ clothes the poor Martin with glory. “You know the grace of our Lord Jesus Christ, that though he was rich, yet for your sake he became poor, so that by his poverty you might become rich” (2 Cor 8:9). The words of the holy gospel: “I was naked and you clothed me” become “You, Martin, were naked and I clothed you.” We celebrate Martin, clothed with grace and with glory by the humble beggar, Christ, whom he had clothed by cutting his prestigious Roman military cloak in half with his sword: the sacrifice of his pride.
The naked Christ is all around us waiting to be clothed in whatever remnants our pride will yield to the sword of sacrificial love. In the absence of a sword, a mere pin will do! The paradox is that in clothing the beggar, we become the beggar, and the beggar becomes the one who clothes us in a mantle of justice, in the cloak of grace and of glory. The smallest gesture of sacrificial love on our part unleashes a torrent of transforming love on the part of God. There is no equality here; there cannot be. Fair exchange is utterly foreign to the Kingdom of God. “If a man offered for love all the wealth of his house, it would be utterly scorned” (Ct 8:7). The divine response is always magnificently disproportionate to the human gesture.
Nowhere is this truer than in the mystery of the Eucharist. The Liturgy of the Word stirs us to respond in some way to the God who reveals Himself in the Scriptures, and who, in revealing Himself, in speaking, already gives Himself, already communicates his life, his love, his light to us. “What shall I render to the Lord for all his bounty to me? I will lift up the cup of salvation and call on the name of the Lord” (Ps 115:12-13).
How do we respond? What do we bring to the altar? A little bread, a little wine, a drop of water: poor and humble symbols of ourselves, of our life, our work, our joys, our sufferings, but especially of our desire to belong entirely to God. What is the bread on the paten, the wine mixed with water in the chalice, if not a silent cry to the living God: Take me! Suscipe me. I surrender to the priestly hands of the Son; I yield to the mysterious action of the Holy Spirit. I offer myself to the two hands of the Father, the Son and the Holy Spirit, that by them, my poverty might become anaphora, oblation, lifted up to the Father.
And in exchange, what do we receive? The Body and Blood of our Lord Jesus Christ hidden beneath the sacramental veils of a little bread and a little wine. Our Lord Jesus Christ appeared to Saint Martin wrapped in the cloak that Martin had given him. We give him not a cloak divided by a sword, but grains of wheat ground and baked, grapes crushed and fermented. He comes to us wrapped in the humblest of cloaks: the mysterious appearances of bread and wine.
The exchange is divinely disproportionate. It cannot be otherwise. It is a law of the Kingdom: the water at Cana, once offered, once given becomes a superabundance of the finest vintage; the few loaves and fishes, once offered, once given, suffices to feed a vast multitude. Let us then, in this Eucharist, make our poor and humble offering: the offering of ourselves. The divine response will be more than we can ask or imagine. Behold, he comes: our King wrapped in the sacramental cloak!