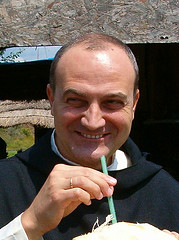 Padre Luca Maria Zecchetti, O.Cist. celebrates his onomastico today. Don Luca, a native of Milano, is the prior of Santa Croce in Gerusalemme. He possesses seemingly boundless energy and needs it as the director of the famous children’s singing group, Le Matite Colorate. He is gifted with a magnificent voice and uses it well for the glory of God and the joy of all who hear him. Don Luca also looks after the abbey’s postulants and novices. Recently he undertook a journey to our new foundation, the Monastery of Santa Cruz in Guadalajara, Mexico. Join with me today in praying for him and in wishing him a happy feastday.
Does Don Luca look unhappy to you? If you are interested in an expression of Cistercian–Benedictine life that unites the traditional monastic observances with the service of the Church, write to me.