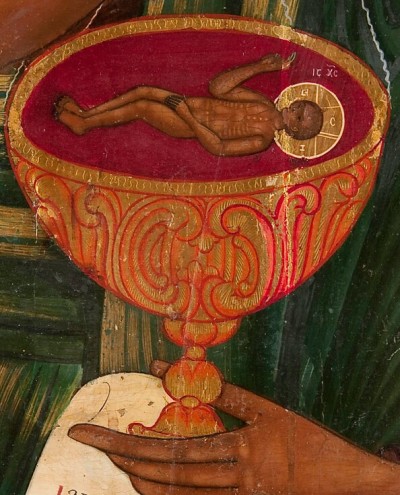 Sacrilege
Will the distressing news of the sacrilege perpetrated in Pamplona, Spain provoke any kind of concrete response? Spanish “artist” Abel Azcona stole more than 240 consecrated Hosts by pretending to receive Holy Communion at Mass. He then placed the hosts on the ground to form the word “pederasty” in Spanish. The sacrilege is being prolonged by a display of photographs in a public art gallery in Pamplona, sponsored by the city’s Department for Culture.

Could not as many Holy Masses of Reparation be offered in Pamplona (and indeed in all of Spain and Europe) as there were Sacred Hosts desecrated?

Could not there as many public Hours of Adoration and Reparation be made as there were Sacred Hosts desecrated?

Could not there not be a Eucharistic procession of reparation through the city of Pamplona?

Proposal for the Year of Mercy
Even if these things were done, it remains that other questions need to be addressed. A priest friend said to me this morning that bishops the world over need to consider a moratorium on Holy Communion in the hand. Perhaps for the Year of Mercy? Are we to show no mercy to the One who is present among us under the appearances of a thing so fragile as the Host? Do we not recognize in the Sacred Host God become, for love of us, vulnerable, poor, silent, and defenseless? Do we not see that the Sacred Host is the ultimate expression of what Saint Paul (see Philippians 2:7) calls the kenosis of the Son of God, that is His utter self–emptying?

More than a Mere Oversight?
The Instruction Redemptionis Sacramentum promulgated eleven years ago by the Congregation for Divine Worship and the Discipline of the Sacraments 25 March 2004, seems, in most places, to have had little or no effect. One wonders if the clergy were at all given the opportunity to come together to study the document and, with one mind, plan its implementation. Among other things, in article 92,the Instruction says clearly:

“If there is a risk of profanation, then Holy Communion should not be given in the hand to the faithful”.

Many times I have had Sacred Hosts, sometimes bearing the imprint of shoes after having been trampled, brought to me by aggrieved layfolk who picked them up from the floor of churches. I think it only reasonable to conclude that there is, in fact, widespread risk of profanation. Consequently, article 92 of Redemptionis Sacramentum needs to be invoked and implemented. Not to do so would be, I think, more than a mere oversight.

Hail, true Body, truly born
Of the Virgin Mary mild
Truly offered, wracked and torn,
On the Cross for all defiled,
From Whose love pierced, sacred side
Flowed Thy true Blood’s saving tide:
Be a foretaste sweet to me
In my death’s great agony.

Foremost and Indispensable
It becomes to me increasingly clear why Pope Saint Pius X envisaged that the restoration of all things to Christ had to begin with the sacred liturgy.

Filled as We are with a most ardent desire to see the true Christian spirit flourish in every respect and be preserved by all the faithful, We deem it necessary to provide before anything else for the sanctity and dignity of the temple, in which the faithful assemble for no other object than that of acquiring this spirit from its foremost and indispensable font, which is the active participation in the most holy mysteries and in the public and solemn prayer of the Church. (Tra le Sollecitudini, Motu Proprio promulgated on November 22, 1903)

Priests: Guardians of the True Body of Christ
The lack of a reaction to sins perpetrated against the Body of Christ comes, I fear, first of all, from a clergy that, for fear of accusations of clericalism, has become, in some very crucial matters, disempowered and ineffectual. Saint Thomas’s clear teaching on the duty of the priest to care, first of all, for the “true Body of Christ”, needs to be reiterated and affirmed:

A priest exercises a twofold action: the one, which is principal, over the true body of Christ; the other, which is secondary, over the mystical body of Christ. The second act depends on the first, but not conversely. (Suppl. q. 36, a.1)

The hour has come for priests to reclaim their rightful guardianship over the that most fragile, vulnerable, and silent of mysteries, the true and adorable Body of Christ. On this one thing depends the exercise of every priest’s ministry to the members of the Mystical Body. Nothing done at the altar or from the altar is without significance. It time to critically re-evaluate those liturgical practices and malpractices that leave the Body of Christ exposed to profanation and that have opened the door to sacrileges like the one so recently in the news.