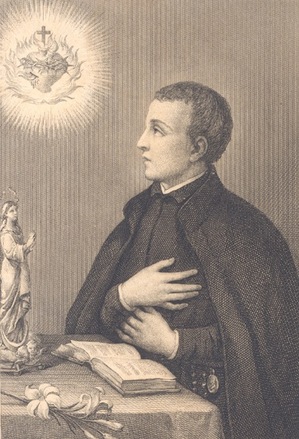 I was remiss in not posting something about the beatification of Father Bernardo Francisco de Hoyos, S.J., which took place this past April 19th.
Because of My Love for You
On July 11, 1726 a not quite fifteen year old Bernardo Francisco de Hoyos y Seña crossed the threshold of the Jesuit novitiate of the Province of Castile. Straightaway he chose the Flemish Saint John Berchmans as his model and intercessor. At his profession on July 12, 1728, he heard Our Lord say to him: “From today on I will unite Myself more intimately to you because of my love for you.” Our Lord, His Virgin Mother, Saint Ignatius, Saint Teresa of Avila and other celestial visitors manifested themselves to the young Jesuit, conversed with him, counseled him, and encouraged him.
A Consoler of the Heart of Jesus
On August 10, 1729, the Saviour, covered with His Precious Blood, appeared to Bernardo, and showing him the wound in His Side, said, “Rejected by humanity, I come to find my consolation with chosen souls.” Bernardo’s experience closely resembles that of Saint Margaret Mary Alacoque fifty-three years earlier in the Visitation Monastery of Paray-le-Monial in France.
Priest
Bernardo was ordained a priest on January 2, 1735. Saint John the Evangelist and Saint Francis de Sales, mystically present at the ordination, served as his “godfathers” in the priesthood. In that same year he wrote:

Hitherto I had great confidence in my prayers and petitions, depending on the intercession of the Heart of Jesus; at present I have no doubt about obtaining whatsoever I ask, if it is for the greater glory of God. I am convinced that at the altar the Eternal Father can refuse me nothing . . . I find myself with views like that of Venerable Father La Colombière concerning the greatness of this sacrifice. Here I am as if I were triumphant, for it seems to me not only that I am making reparation for myself and for the whole world, but that the Eternal Father is my debtor.

Now and again, during Mass . . . a word of the Eternal Father has assured me of the satisfaction He takes in His Son and in His Heart, and how this satisfaction may embolden me, even at the sight of my sins and ingratitude, to presume as much as I fancy, for all is contained in the merits of Jesus, whose minister I am and whose place I take.

Death
Father Bernardo de Hoyos died on November 29, 1735 at the age of twenty-four. He left behind the memory of his brief but fruitful ministry as a priest; the reputation of a charism for delivering souls from the vice of impurity; his book, The Hidden Treasure, published under the name of Father John de Loyola; and a wealth of detailed accounts of his mystical experiences of the Heart of Jesus.
Beatification
On January 17, 2009, the Holy Father met with the Prefect of the Congregation for the Causes of Saints, Archbishop Angelo Amato, S.D.B. The Pope authorized the promulgation of a number of decrees, among them the recognition of a miracle attributed to the Servant of God Bernardo Francisco Hoyos.
On April 19, 2010, Father Bernardo Francisco de Hoyos was beatified in Valladolid, Spain. The ceremony was presided over by Archbishop Angelo Amato, prefect of the Congregation for the Causes of Saints. In addition to nearly a 1,000 priests and more the 20,000 faithful, approximately fifty bishops and cardinals attended the ceremony. The new Blessed’s liturgical memorial will be celebrated on November 29th, the anniversary of his death.