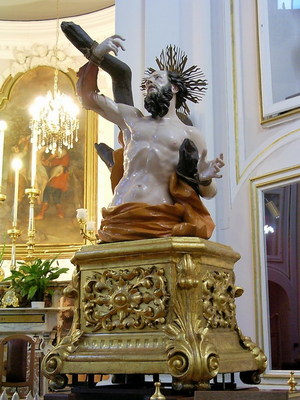 I find it curious that, for the feast of Saint Bartholomew, the Roman Missal does not give the passage from Saint John’s Gospel (1:45-51) that concerns him directly:

Philip findeth Nathanael, and saith to him: We have found him of whom Moses in the law, and the prophets did write, Jesus the son of Joseph of Nazareth. And Nathanael said to him: Can any thing of good come from Nazareth? Philip saith to him: Come and see. Jesus saw Nathanael coming to him: and he saith of him: Behold an Israelite indeed, in whom there is no guile. Nathanael saith to him: Whence knowest thou me? Jesus answered, and said to him: Before that Philip called thee, when thou wast under the fig tree, I saw thee. Nathanael answered him, and said: Rabbi, thou art the Son of God, thou art the King of Israel. Jesus answered, and said to him: Because I said unto thee, I saw thee under the fig tree, thou believest: greater things than these shalt thou see. And he saith to him: Amen, amen I say to you, you shall see the heaven opened, and the angels of God ascending and descending upon the Son of man.

The Whole Night in Prayer to God

Instead, we are given Saint Luke’s account of the call of the Apostles (6,12-19) among whom, of course, we find the name of Saint Bartholomew:

And it came to pass in those days, that he went out into a mountain to pray: and he passed the whole night in the prayer of God. And when day was come, he called unto him his disciples: and he chose twelve of them (whom also he named apostles): Simon, whom he surnamed Peter, and Andrew his brother, James and John, Philip and Bartholomew, Matthew and Thomas, James the son of Alpheus, and Simon who is called Zelotes, And Jude the brother of James, and Judas Iscariot, who was the traitor. And coming down with them, he stood in a plain place: and the company of his disciples and a very great multitude of people from all Judea and Jerusalem and the sea coast, both of Tyre and Sidon, Who were come to hear him and to be healed of their diseases. And they that were troubled with unclean spirits were cured. And all the multitude sought to touch him: for virtue went out from him and healed all.

We Will Run After Thee

What are we to garner from the choice of this Gospel for today’s Holy Mass? First of all, we see Our Lord going out to the mountain to pray. Shall we not follow Him to the mountain? Do we not want to be with Him while He prays? Blessed indeed is the soul allowed to witness the Son in prayer to His Father! “Draw me: we will run after thee to the odour of thy ointments” (Ct 1:3).

What is a monk if not a man drawn after Jesus, running to the odour of His anointing, that is, the sweet fragrance of the Holy Spirit, the Divine Anointing from above, poured out in such abundance upon Christ our Head, that it flows down to cover even the least members of His Mystical Body, that is the Church. The monk is a man who follows Jesus in His ascent to the mountain. He is compelled to climb in the footsteps of the Son, and so return to the Father. “I am the way, and the truth, and the life,” says the Lord. “No man cometh to the Father, but by me” (Jn 14:6).

Whatsoever Thou Desirest to Find in Me

The summit of the mountain is union with Christ in charity. “Having, therefore, ascended all these degrees of humility, the monk will presently arrive at that love of God which, being perfect, casteth out fear” (RSB 7) At the summit of the mountain the love of Christ embraces the monk and holds him fast, and the monk, humbly but sincerely, consents to that love. “Do Thou in me, Lord Jesus, whatsoever Thou desirest to find in me, so as to draw out of my nothingness all of the love and all of the glory which Thou didst have in view, when Thou didst create me” (Prayer of M. Yvonne-Aimée de Jésus).

The monk is called not merely to be a witness the Son’s prayer to the Father, but to participate in it. The goal of the monastic life is, in effect, to be able to say in words reminiscent of Saint Paul: “And I pray, now not I; but Christ prayeth in me” (cf. Gal 2:20). All of the thoughts, and words, and attitudes that one thought were prayer have, at some point in the ascent of the mountain, to be abandoned, utterly left behind. They become burdensome. One is obliged to relinquish them . . . or to give up on the ascent.

Forsaking all that he experienced as prayer, the monk enters the sanctuary of the Sacred Liturgy, wherein no detail is insignificant. Putting aside his own words, he applies himself to uttering those given him by the Bride of Christ, the Church. Renouncing his own thoughts, however pious these may be, he begins to think with the Church, and through the Church, and thus, even in his personal prayer, he acquires the mind of Christ. Even his body must give up those attitudes and postures that once he found so congenial, so as to rise and fall, and bend and bow, and yield in all things to a choreography of divine artistry, the work of the Holy Ghost embodied in the rubrics that are the transmission of a secret life, an inner dynamism coming from above.

If only for what it reveals of the monastic vocation, I treasure this particular Gospel passage given us on the feast of Saint Bartholomew. And there is one other detail, this one drawn from the traditional account of Saint Bartholomew’s martyrdom. He was flayed. The monk, too, is flayed, at least after a fashion. The things that I thought were myself, are peeled away from me. I find myself naked, vulnerable, and utterly not the man I thought I was. And this is an immense grace. It is the beginning of transformation into Christ, of Christ living, and praying, and dying, and rising in me to the glory of the Father.