Skip to content
HomeMatters LiturgicalIn Praise of the Octave of Pentecost 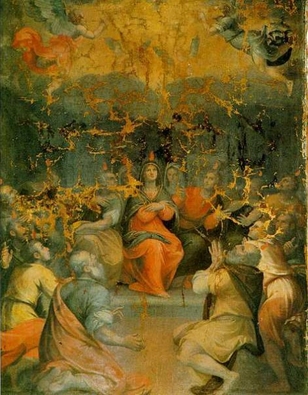 Days of Fire and of Light
In the traditional Roman liturgical calendar the glorious solemnity of Pentecost has its own Octave: eight days under the grace of the Holy Spirit, eight days of joy in the fire and light of His presence, eight days of thanksgiving for His gifts. The Octave of Pentecost was one of the most beautiful moments in the Church Year, not only by reason of the liturgical texts, but also by reason of its effect in the secret of hearts. Each day of the Octave the Church would sing her “Golden Sequence,” the Veni, Sancte Spiritus: a chant of such unction that one never tires of repeating it.

The Suppression of a Great Joy
In some places in the Catholic world, Whit Monday was a reason to have a civil holiday, as well as a liturgical celebration. In this way, the mysterious presence of the Holy Spirit marked even the secular culture. It came as shock, and brought no little distress to the faithful, when in 1969 the Octave of Pentecost suddenly disappeared from the calendar. It would appear that not even the Pope was apprised of the suppression of one of the Church’s great joys.

So the Story Goes
The story goes that on the Monday after Pentecost in 1970 His Holiness Pope Paul VI rose early and went to his chapel for Holy Mass. Instead of the red vestments he expected, green ones were laid out for him. He asked the Master of Ceremonies, “What on earth are these for? This is the Octave of Pentecost! Where are the red vestments?” “Your Holiness,” replied the Master of Ceremonies, “this is now The Time Throughout the Year. It is green, now. The Octave of Pentecost is abolished.” “Green? That cannot be,” said the Pope, “Who did that?” “Your Holiness, you did.” And Paul VI wept.
Paul VI did not weep alone. Many wept with him. It was reported that Catherine de Hueck Doherty of Madonna House was inconsolable. Faithful the world over were speechless at the brutal removal of one of the Church Year’s most cherished moments. In some countries the hierarchy were frightfully embarrassed: the civil calendar had retained the Monday and Tuesday after Pentecost as holidays, while the Church had erased them from hers. Little by little, the voices of those seeking the restoration of the Pentecost came to be heard in high places.

Basking in the After–Glow
The celebration of Octaves respects a fundamental need of the human person, and of any group of people: the need to linger over anything momentous, the need to bask in the after-glow of events rich in meaning, the need to prolong the feast. Man has an innate capacity and desire for meditatio. Meditatio is the act of repetition by which truth, or beauty, or goodness, passes from the head into the heart. There it becomes life-changing.