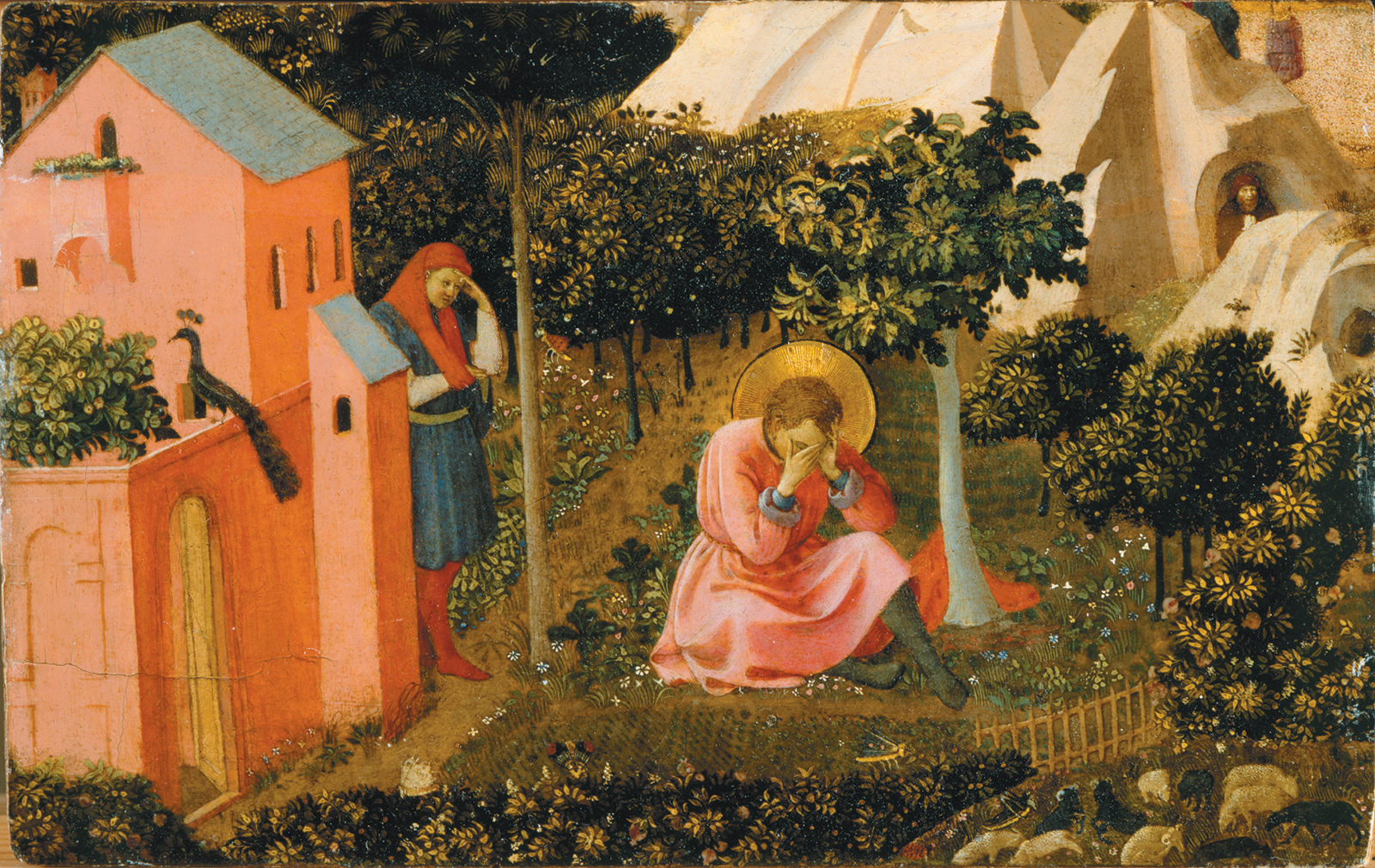 2 Jan. 3 May. 2 Sept.
Let us then at length arise, since the Scripture stirreth us up, saying: It is time now for us to rise from sleep.” And our eyes being open to the deifying light, let us hear with wondering ears what the Divine Voice admonisheth us, daily crying out: “To-day if ye shall hear His voice, harden not your hearts.” And again, “He that hath ears to hear, let him hear what the Spirit saith to the Churches.” And what saith He? “Come, my children, hearken to Me, I will teach you the fear of the Lord. Run while ye have the light of life, lest the darkness of death seize hold of you.”

There is not a day, not an hour, not a moment when Our Lord is not inviting us to arise, to leave behind former things, and to follow Him. Saint Benedict says, “Let us at length arise,” Exsurgamus ergo. He is drawing upon the words of the Apostle in Romans 13, the very words that quickened the conversion of Saint Augustine in the famous episode of Tolle lege. You all know how Saint Augustine describes what happened to him:

But when a profound reflection had, from the secret depths of my soul, drawn together and heaped up all my misery before the sight of my heart, there arose a mighty storm, accompanied by as mighty a shower of tears. Which, that I might pour forth fully, with its natural expressions, I stole away from Alypius; for it suggested itself to me that solitude was fitter for the business of weeping. So I retired to such a distance that even his presence could not be oppressive to me. Thus was it with me at that time, and he perceived it; for something, I believe, I had spoken, wherein the sound of my voice appeared choked with weeping, and in that state had I risen up. He then remained where we had been sitting, most completely astonished. I flung myself down, how, I know not, under a certain fig-tree, giving free course to my tears, and the streams of mine eyes gushed out, an acceptable sacrifice unto Thee. (Confessions, Book VIII, Chapter 12)

Et proruperunt flumina oculorum meorum, acceptabile sacrificium tuum. Is this allusion to the acceptable sacrifice of tears, the sacrificium lacrimarum, not beautiful? Saint Augustine pours out before God the sacrifice of tears, knowing the word of the psalmist: Deus, vitam meam annuntiavi tibi; posuisti lacrimas meas in conspectu tuo, which Monsignor Knox gives as, “My wandering life none knows as thou; no tear of mine but thou dost hoard and record it” (Psalm 55:9). Saint Benedict himself makes the sacrificium lacrimarum an expression of pure prayer. “And let us remember that not for our much speaking, but for our purity of heart and tears of compunction shall we be heard” (Chapter XX).

And, not indeed in these words, yet to this effect, spake I much unto Thee, – “But Thou, O Lord, how long?” How long, Lord? Wilt Thou be angry for ever? Oh, remember not against us former iniquities;” for I felt that I was enthralled by them. I sent up these sorrowful cries, – “How long, how long? Tomorrow, and tomorrow? Why not now? Why is there not this hour an end to my uncleanness?” (Confessions, Book VIII, Chapter 12)

Saint Augustine flings himself on the ground, in a manner that evokes the prayer of Jesus in Gethsemani described in the Epistle to the Hebrews: “Who in the days of his flesh, with a strong cry and tears, offering up prayers and supplications to him that was able to save him from death, was heard for his reverence” (Hebrews 5:7). Saint Augustine’s prayer is inspired by Psalm 12 with its poignant repetition of usquequo:

How long, O Lord, wilt thou forget me unto the end? how long dost thou turn away thy face from me? How long shall I take counsels in my soul, sorrow in my heart all the day? How long shall my enemy be exalted over me? (Psalm 12:1–3)

We can, all of us, take comfort in knowing that the prayer of a saint, and of a very great saint at the critical moment of his conversion, was made up of a series of questions.

I was saying these things and weeping in the most bitter contrition of my heart, when, lo, I heard the voice as of a boy or girl, I know not which, coming from a neighbouring house, chanting, and oft repeating, “Take up and read; take up and read.” Immediately my countenance was changed, and I began most earnestly to consider whether it was usual for children in any kind of game to sing such words; nor could I remember ever to have heard the like. So, restraining the torrent of my tears, I rose up, interpreting it no other way than as a command to me from Heaven to open the book, and to read the first chapter I should light upon. For I had heard of Antony, that, accidentally coming in whilst the gospel was being read, he received the admonition as if what was read were addressed to him, “Go and sell that thou hast, and give to the poor, and thou shalt have treasure in heaven; and come and follow me.” And by such oracle was he forthwith converted unto Thee. (Confessions, Book VIII, Chapter 12)

So quickly I returned to the place where Alypius was sitting; for there had I put down the volume of the apostles, when I rose thence. I grasped, opened, and in silence read that paragraph on which my eyes first fell, – “Not in rioting and drunkenness, not in chambering and wantonness, not in strife and envying; but put ye on the Lord Jesus Christ, and make not provision for the flesh, to fulfil the lusts thereof.” No further would I read, nor did I need; for instantly, as the sentence ended, – by a light, as it were, of security infused into my heart, – all the gloom of doubt vanished away. (Confessions, Book VIII, Chapter 12)

The text upon which  Saint Augustine’s eyes fell is the very one that shine through today’s passage of the Prologue:

And that knowing the season; that it is now the hour for us to rise from sleep. For now our salvation is nearer than when we believed. The night is passed, and the day is at hand. Let us, therefore cast off the works of darkness, and put on the armour of light. Let us walk honestly, as in the day: not in rioting and drunkenness, not in chambering and impurities, not in contention and envy: But put ye on the Lord Jesus Christ, and make not provision for the flesh in its concupiscences. (Romans 13: 12:14).

And he saith to him: Follow me. And he arose up and followed him. (Matthew 9:9)
Et ait illi: Sequere me. Et surgens, secutus est eum.

Saint Luke’s account of the same event, with its three verbs in succession, is even more compelling:

And he rose up, and left all behind, and followed him. (Luke 5:28)
Et relictis omnibus, surgens secutus est eum.

In all three accounts, the resurrection of Matthew is preceded immediately by another resurrection, that closely parallels it: that of the paralytic in the house at Capharnum:

But that you may know that the Son of man hath power on earth to forgive sins, (then said he to the man sick of the palsy,) Arise, take up thy bed, and go into thy house. And he arose, and went into his house. (Matthew 9:6–7)
Surge, tolle lectum tuum, et vade in domum tuam. Et surrexit, et abiit in domum suam.

I am struck by the sequence of the verbs. Jesus gives the command, Surge, and straight away the resurrection occurs, Et surrexit.

And immediately rising up before them, he took up the bed on which he lay; and he went away to his own house, glorifying God. (Luke 5:25).
Et confestim consurgens coram illis, tulit lectum in quo jacebat: et abiit in domum suam, magnificans Deum.

Saint Mark uses the word statim (straightaway) to connect the command, Surge and the effect of the command, Et statim surrexit ille.

I say to thee: Arise, take up thy bed, and go into thy house. And immediately he arose (Mark 2:11–12)
Surge, tolle grabatum tuum, et vade in domum tuam. Et statim surrexit ille.

What emerges from all of this is a certain necessary sequence in the operation of grace that culminates in a spiritual resurrection. First, there is the presence of Jesus—hidden in the episode of Saint Augustine’s conversion—but real nonetheless. Then, there is the word or, if you prefer, the command of Jesus. In Saint Augustine’s conversion the operative word of Jesus comes through the words of the Apostle. In the Gospel accounts of the calling of Matthew, it is Jesus Himself who speaks. In every case, all depends on this word of Jesus, even as did the resurrection of Lazarus after four days: “Lazarus, come forth” (John 11:43); Lazare, veni foras. Then comes the actual resurrection: a miracle of grace that requires, nonetheless, the engagement of the will, and even, an effort of the body, the movement of muscles, the first step.

Our vow of conversatio morum binds us to live not only in compunction, but also in a continuous resurrection. For this to happen, we have to follow the pattern given us: (1) the presence of Jesus; (2) the word of Jesus; (3) the response, that is, the leap of the heart in faith that releases the grace of resurrection in the soul and makes it possible to begin afresh.