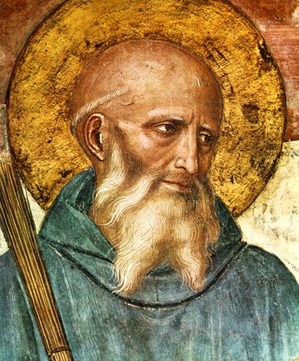 Notice the instrument of penance in Saint Benedict’s hand. It rather contrasts with the gentleness of his expression.
Every occasion of presumption should be avoided in the monastery. So we decree that no one be allowed to excommunicate or strike any of his brethren, except the abbot have given him authority.
In Chapter 70 of the Holy Rule, Saint Benedict treats of those monks who, deceived by their own pride, appoint themselves to control, correct, and castigate their brethren. Anyone with a certain experience of community life in a monastery has probably come up against this sort of fellow. Censorious, condescending, brittle, hypercritical, and never content, he is ever on the lookout for the speck in his brother’s eye and unaware of the log in his own. He is infected with what Saint Benedict will call in Chapter 72 an evil zeal of bitterness.
The Sacristy Plague
Religious controllers, correctors, and castigators are not found only in the cloister. Very often they lurk in sacristies, piously fussing about, and, like the devil, “seeking someone to devour.” In their eyes, nothing is ever rubrically correct. Every alb is either too long or not long enough, too lacy or too lacking in lace. Every candle is either crooked or too short. The incense is not of the right sort, or the right fragrance. Every chasuble is either of the wrong fabric or not quite the proper shade of whatever the liturgical colour happens to be. In his eyes the profound bows are never profound enough, and the mediocre bows insufficiently mediocre. They have an opinion about everything, generally negative, and will offer it without being asked. Saint Benedict knows what a plague such types can be and, in his monastery, he will have none of it.
Corrections
The grace to make corrections gracefully is given to those duly constituted in authority over others. A wise abbot or prior will avoid pouncing on a brother as soon as he notices a fault. He will make a mental note of it, pray over it, and at the opportune moment, bring it to the brother’s attention humbly, meekly, and firmly. Corrections are an opportunity to grow in humility, in wisdom, and in grace. A positive experience of correction can, in fact, cause one to look forward to being corrected. Correction becomes an occasion of grace and of growth.
Humble and Mild
When the father of the monastery, or the father master of novices, seeks to rein in an intemperate enthusiasm, to moderate a unwise and idiosyncratic expression of piety, to curb an ascetical excess, or to correct a certain softness in one’s observance, he does so fully conscious of his own excesses and shortcomings. He accepts that he cannot control another. He makes corrections humbly. He prescribes the suitable penitential remedy wisely. He prefers to err on the side of an excessIve mildness rather than on that of harshness. At the same time, he will not be indulgent in the face of sin nor will he compromise the purity of the monastic ideal by tolerating vice, or by looking the other way when he notices a brother wounded in spiritual combat.
Brutish Bullying
Saint Benedict divides the community of his own day into two categories: those under fifteen years of age, and everyone else. The lads living in the monastery are not yet monks. Some of them may leave the monastery and go into the world, enriched by their instruction and education in the cloister. Holy Father Benedict holds all his monks responsible for the behaviour of the boys entrusted to his care. But even here, there is no room for any sort of abusive severity, or brutish bullying.
For the Whole Church
The whole Benedictine approach to vigilance, correction, and sanctions is characterized by humility, prudence, kindness, and moderation. It works as well in families, in business, and in parish life as does within the cloister. Saint Benedict concludes Chapter 70 by saying, Do not thou to another, what thou wouldst not have done to thyself (Tob 4:16). The wisdom of Saint Benedict belongs to the whole Church.