Skip to content
HomeLiturgical TextsThe Mass: The Appearance on Earth of the Eternal 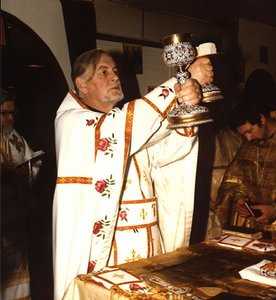 From The Journals of Father Alexander Schmemann (+1983):
“Wednesday, October 3, 1979
The Pope of Rome is in New York. We watched him on television in Yankee Stadium. A mixed impression. On one hand, an unquestionably good man, and full of light. Wonderful smile. Very genuine—a man of God. But, on the other hand, there are some ‘buts’!
First of all, the Mass itself. The first impression is how liturgically impoverished the Catholic Church has become. In 1965, I watched the service performed by Pope Paul VI in the same Yankee Stadium. Despite everything, it was the presence, the appearance on earth of the eternal, the ‘super earthly.’ Whereas yesterday, I had the feeling that the main thing was the ‘message.’ This message is, again and again, ‘peace and justice,’ ‘human family,’ ‘social work,’ etc.
An opportunity was given, a fantastic chance to tell millions and millions of people about God, to reveal to them that more than anything else they need God! But here, on the contrary, the whole goal, it seemed, consisted in proving that the Church also can speak the jargon of the United Nations.
All the symbols point the same way: the reading of the Scriptures by some lay people with bright ties, etc. And a horrible translation: I never suspected that a translation could be a heresy: Grace—’abiding love’!
Does one have to serve Mass in Yankee Stadium? But if it’s possible and needed, shouldn’t the Mass be, so to say, ‘super earthly,’ separated from the secular world, in order to show in the world—the Kingdom of God?”
The emphases are my own.