Skip to content
HomeEucharistic Face of ChristCanonized Twelve Years Ago: A Patron of Parish Priests 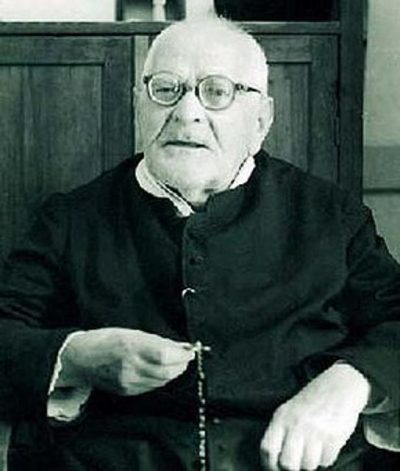 Saint Gaetano Catanoso
Gaetano Catanoso was born on 14 February 1879 in Chorio di San Lorenzo, Reggio Calabria, Italy. His parents, prosperous landowners, were exemplary Christians. Gaetano was ordained a priest in 1902, and from 1904 to 1921 he served in the rural parish of Pentidattilo. The Holy Face of Jesus illumined Father Catanoso’s life. He venerated the Holy Face as depicted in the image of Veronica’s Veil diffused by the Carmel of Tours in France. He began “The Holy Face” Bulletin and established a local chapter of the “Archconfraternity of the Holy Face” in 1920. “The Holy Face,” he wrote, “is my life.” Saint Gaetano directed anyone seeking the Face of Christ to the Most Holy Eucharist, saying, “If we wish to adore the real Face of Jesus, we can find it in the divine Eucharist where, with the Body and Blood of Jesus Christ, the Face of our Lord is hidden under the white veil of the Host.”

A Eucharistic Parish Priest
On 2 February 1921, Don Gaetano Catanoso was transferred to the large parish of Santa Maria de la Candelaria. He served there until 1940. The daily celebration of Holy Mass and Eucharistic adoration were the soul of his priesthood and the sustenance of his apostolate. As the parish priest of Candelaria, Saint Gaetano drew people to Christ in the Most Holy Sacrament of the Altar and renewed devotion to the Madonna. The plight of orphans moved him to undertake a number of charitable initiatives. Father Catanoso played an active role in the catechetical instruction of children and young people. Deeply moved by the message of the Blessed Virgin Mary at La Salette, Don Gaetano preached against blasphemy and taught the faithful to sanctify Sundays and the feasts of the Church.

Father Catanoso was compelled to reach out to orphans and to children suffering from neglect and abuse. He sought to provide youth with Christian role models. His charity extended to the forsaken elderly and to priests who found themselves isolated and without support. In all who suffered Father Gaetano saw the Face of Christ. His ardent love for the Most Holy Eucharist found expression in the restoration of churches and abandoned tabernacles.

Servant of Priests
“The Missionary of the Holy Face” spent hours or entire days in prayer before the Tabernacle. In his parish and beyond it he promoted Eucharistic Adoration in the spirit of reparation. He set up “flying-squads” of priests willing to assist other priests by preaching and hearing confessions on special occasions. In 1915 Saint Gaetano published for the first time a “Eucharistic Holy Hour” for priests. Saint Gaetano never let a single day pass without speaking of the Holy Face of Jesus.

Victim Priest
Father Gaetano patiently accepted sickness and, in the last stage of his life, blindness, desiring to unite himself to the saving Passion of Christ. In 1929 he offered himself as a victim priest to the Heart of Jesus.

La Madonna
Saint Gaetano’s devotion to the Madonna was tender and childlike. He began praying the rosary daily as a little boy and remained faithful to the practice until his death. The rosary never left his hands, becoming for him a ceaseless prayer of the heart. To all who approached him for spiritual counsel he communicated his love of the Mother of God and his confidence in her intercession.

Spiritual Father and Founder
From 1921 to 1950 Saint Gaetano served as confessor to various religious communities and in the Reggio Calabria prison. He served as spiritual director of the Archdiocesan Seminary. Everyone called him “Father,” a title not normally given parish priests in Italy. He was, in fact, a beloved spiritual father generating holiness of life in countless priests and consecrated women. Father Gaetano’s simple and ardent preaching attracted sinners to the contemplation of the Holy Face of Jesus and inspired souls to imitate his life of adoration and reparation.
In 1934, Father Catanoso founded in Riparo, Reggio Calabria, the Congregation of the Sisters Veroniche of the Holy Face of Jesus. The Sisters devote themselves to Eucharistic adoration and reparation to the Holy Face, catechesis, assistance to children, youth, priests and the elderly.

Canonized Twelve Years Ago
Father Gaetano Catanoso died on the Thursday of Passion Week, April 4, 1963. Pope John Paul II beatified him on May 4, 1997. Pope Benedict XVI canonized him on October 23, 2005. The liturgical feast of Saint Gaetano Catanoso was fixed on September 20, the date of his ordination to the holy priesthood.

V. Pray for us, Saint Gaetano.
R. That we may be made worthy of the promises of Christ.

Let us pray.
Stir up, O Lord, in our hearts the spirit of adoration and reparation that filled Saint Gaetano, Thy priest, that we, having our eyes fixed, like his, on the Eucharistic Face of Jesus, may live in ceaseless prayer and in the humble service of those most in need of compassion. Through our Lord Jesus Christ, Your Son, who lives and reigns with You in the unity of the Holy Ghost, God, forever and ever.