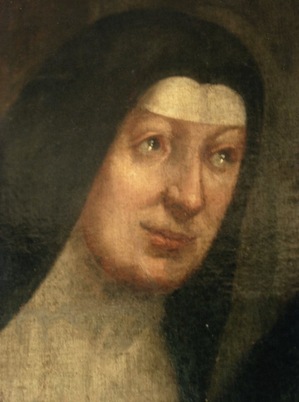 Today I conclude my translation of Mother Mectilde’s introduction to her Constitutions on the Rule of Saint Benedict adding again, something in the way of a commentary. I will continue translating other writings of Mother Mectilde, as time permits.

This second obligation requires a state and dispositions that are altogether contrary to the preceding one. If the first [obligation] obliges a “host” to look upon herself as consecrated to the glory of the Most Holy Sacrament, the second obliges her to consider herself as sacrificed for all the profanations of this adorable Mystery. If the first obligation requires that a true reparator give, and do everything, to render to the Most Holy Sacrament the honour which It merits, the second requires that the true reparator lose everything, and suffer all, to expiate the outrages and the indignities that It receives.

Identification With Christ
The Mectildian-Benedictine adorer enters into a two-fold identification with Our Lord Jesus Christ. There is, in a certain sense, an ascending aspect to reparation: the adorer offers himself to Jesus in the Most Holy Sacrament of the Altar, in thanksgiving for the divine and life-giving Mysteries of His Body and Blood present in the tabernacles of the world, and in compensation for the love, adoration, praise that never rise, even from the hearts of those in whose midst He dwells sacramentally.
Mystical Substitution
There is also a descending aspect to reparation: the adorer chooses, out of love, to be identified with souls consumed with hatred for the things of God, those who despise the adorable Mystery of Our Lord’s Body and Blood, treating it irreverently, profaning it by sacrilegious acts, and offending Our Lord’s Eucharistic Heart with cruel mockery. Mother Mectilde would have her Benedictines so enter into the Christ’s redemptive love for such sinners that the adorer accepts sufferings, trials, and darkness in their stead, trusting that by this mystical substitution undertaken out of love, at least some of those who despise the Most Holy Sacrament will be converted to Eucharistic love.

If then, a religious of the Holy Sacrament wants to understand the spirit of her vocation, let her hold herself always in a state of victimhood in Our Lord’s holy Presence, and if she wants to live in a state of true victimhood, let her, at times, see herself as an object of love and of good pleasure before her Divine Lord, who willingly receives the reparation she makes to His glory and, at other times, see herself as an object of horror and of wrath before her Sovereign Judge, who demands in justice the expiation due Him for so many profanations. Let her, on the one hand, believe herself called to all that is most holy and divine in the spiritual life; and on the other hand, believe herself called to what is most mortifying, most crucifying, and most annihilating in the life of penitence. Finally, let her remain in a state of indifference with regard to the effects of Mercy and Divine Justice, which she is bound her honour equally in the Most Holy Sacrament of the Altar by virtue of her profession.

Let there be no cross, disdain, suffering, death, or annihilation that she will not embrace with joy out of zeal for Divine Justice, for the expiation of all the sins of profanators of the Most Holy Sacrament; just as there are no virtues, graces, merits, perfections, holiness, blessings, praises, adorations, prayers, and good works, that love and piety would not cause her to seek with ardour for the reparation of the honour and infinite glory, the grandeurs, and the excellences, of the same Holy Sacrament.

Mother Mectilde de Bar’s presentation of the vocation of a Benedictine adorer-reparator will shock certain sensibilities, just as the doctrine of Saint Paul, and the hard words of the Gospel once shocked — and continue to shock — those to whom they are addressed. They key to the Mectildian-Benedictine vocation is Love. In this, she is closer to Saint Thérèse of the Child Jesus and of the Holy Face than a superficial reading might lead one to believe.
In December 1666, Mother Mectilde wrote to the Benedictine nuns of Rambervilers:

You, very dear mothers, are reparatrices of love, and your reparations must be made in love, because you must make up for sinners and for the wicked, who are without love.

It is only within the optic of love that the Mectildian-Benedictine vocation to adoration and reparation begins to come into focus.