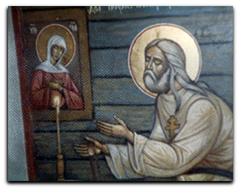 1. Is the icon I used to illustrate the previous post the one that was in the cell of Saint Seraphim of Sarov?

Yes, indeed. In fact, it is the icon before which Saint Seraphim of Sarov died. Its sensibility is Western; its beauty undeniable. The eyes of the Mother of God are lowered. She is the humble Handmaid of the Lord. Her expression is one of interiority and stillness, of pure attention to the Holy Spirit indwelling her Immaculate Heart. The hands, crossed over her breast, depict her reception of the Holy Spirit at the moment of the Incarnation and, again, in the Cenacle on Pentecost. They also suggest her participation in the adorable Mystery of the Most Holy Eucharist. The stars adorning her veil and garments and the cincture tied about her waist are the sign of her perpetual and ever–fruitful virginity. 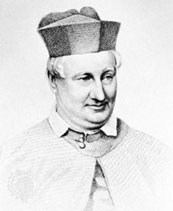 2. Why do I prefer Father Faber’s translation of Saint Louis Grignion de Montfort’s Treatise on True Devotion to the Blessed Virgin Mary? 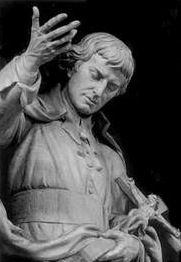 Mary Is Not Half Enough Preached
But what is the remedy that is wanted? What is the remedy indicated by God Himself? If we may rely on the disclosure of the saints, it is an immense increase of devotion to the Blessed Lady; but, remember, nothing short of an immense one. Here in England, Mary is not half enough preached. Devotion to her is low and thin and poor. It is frightened out of its wits by the sneers of heresy. It is always invoking human respect and carnal prudence, wishing to make Mary so little of a Mary that Protestants may feel at ease about her.