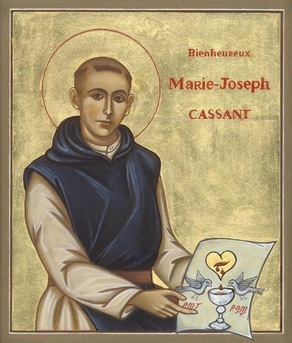 Where His Treasure Was, There Was His Heart
June 17th marks the feast of Blessed Marie-Joseph Cassant, a Trappist monk of the Abbey of Sainte-Marie-du-Désert beatified by Pope John Paul II on October 3, 2004. Father Marie-Joseph died on June 17, 1903; he was twenty-five years old. Solemnly professed for three years, he had been a priest for only nine months. From childhood he wanted nothing else. “Where your treasure house is, there is your heart also” (Mt 6:21).

The Greatness of the Priesthood
In his last letter to his family, Father Marie–Joseph wrote, “For such a long time we hoped against hope to be able to have the whole family together after my ordination so as to share the joy of being present and receiving Communion together at my first Mass. The good Lord heard our deepest wishes. It now remains to us to thank Him and to enter more and more deeply into the greatness of the priesthood. Let us never dare to equate the Sacrifice of the Mass with earthly things.”

An Intercessor
Since 1903 more than 2200 persons from thirty different countries have attested to favours received through the intercession of Father Marie-Joseph. The catalogue of graces attributed to the young monk is impressive: conversions, reconciliations, cures, and comfort in uncertainties and doubts. My friend Father Jacob and I went in pilgrimage to his tomb in 1982 and prayed that both of us might become priests. I was ordained four years later.

Towards La Trappe
Father Marie-Joseph’s road to the priesthood was not an easy one. His parish priest judged him intellectually inadequate for theological studies. After tutoring him for fifteen months in French and Latin, he saw that the young Joseph was not suited for the diocesan seminary. He directed him instead to the Trappe of Sainte-Marie-du-Desert where the monks were ordained to the priesthood after a simpler course of studies, given that they had no pastoral responsibilities or outside ministry.

Thérèse and Marie-Joseph
Joseph entered “Le Desert” on December 5, 1894. Sister Thérèse de l’Enfant Jésus et de la Sainte-Face, five years older than Joseph, had three years left in her Carmel of Lisieux. Their lives were in some ways similar. Although Thérèse had a stronger personality, both were led to find their strength in weakness. “More than ever, then, I delight to boast of the weaknesses that humiliate me, so that the strength of Christ may enshrine itself in me” (2 Cor 12:9).

A Victim-Priest
It is significant that Father Marie-Joseph belonged to the “Association of Victim Souls,” a movement of identification with the oblation of the Heart of Jesus, Priest and Victim. Saint Pius X (1835-1914), Blessed Charles de Foucauld (1858-1916), Blessed Columba Marmion (1858-1923), Blessed Jacob Kern (1897-1924), and Blessed Ildefonso Cardinal Schuster (1880-1954), were all members of the same Association. It was established by the Filles du Coeur de Jésus (Daughters of the Heart of Jesus) following the wishes of their foundress, Blessed Marie de Jésus Deluil-Martiny, after her death. As a member of the Association, Father Marie-Joseph prayed, and signed, an Act of Oblation that the rest of his life was to illustrate and consummate.

Ecce venio!
Behold, I come, O good and gentlest Jesus,
Divine Lamb perpetually immolated upon our altars
for the salvation of the world.
I want to unite myself to Thee,
suffer with Thee,
and immolate myself like Thee,
in union with the Daughters of the Heart of Jesus.
To this end I offer Thee
the sorrows, humiliations, bitternesses, and crosses
that Thy Providence hath sown beneath my feet.
I offer them to Thee
for the intentions for which Thy most sweet Heart
offereth and immolateth Itself.
May my feeble sacrifice return in a shower of blessings
upon the Church, the Priesthood,
my homeland, and poor sinners, my brethren!
Deign Thou accept it by the hands of Mary Mediatrix
and in union with the immolations of her Immaculate Heart.
Amen.

Humiliated
Even in the abbey, theological studies were not easy for Joseph. The monk charged with teaching him often humiliated him publicly for his stupidity, saying, “ You are totally limited! It is useless for you to study. You will not learn any more. To ordain you would be a dishonour to the priesthood.” Father André, his gentle and patient spiritual father, was always there to encourage Father Marie-Joseph, to set him again and again on the path of confidence in the Heart of Jesus.

A Priest Forever
Father Marie-Joseph was ordained on October 12, 1902 at twenty-four and a half years of age. Already tuberculosis was ravaging his young body. His abbot sent him home to his family for seven weeks of rest, hoping that his health might improve, but it was too late for that. Upon returning to the abbey, Father Marie-Joseph was sent to the infirmary. His lungs were irreparably damaged, his breathing difficult. As infirmarian he was given none other than the theology professor who had so harshly berated him.

His Last Communion
Father André remained close to his spiritual son, offering reassurance and comfort, helping him to trust in the love of the Heart of Jesus for him. On June 17, 1903, Father Marie-Joseph received Holy Communion for the last time and, a few moments later, passed into the contemplation of Christ face to face. The beautiful Collect composed for his liturgical memorial sums up his life:

O Lord, Glory of the lowly,
who didst inspire a burning love for the Eucharist in Blessed Joseph Mary,
and didst lead him through the Heart of Jesus into the desert;
grant, we beseech Thee, that by his intercession and example
we may prefer nothing to Christ,
that He may bring us to life everlasting.

The Mass Was His Life
The feast of Blessed Marie-Joseph Cassant, falling in the month of the Sacred Heart and on the day after the feast of Saint Lutgarde, invites us to follow him along the path of confidence in the Heart of Jesus and burning love for the Most Holy Sacrament of the Altar. For Blessed Marie-Joseph nothing equaled the Holy Sacrifice of the Mass; the Mass became his life. At the hour of death his identification with Christ, priest and victim, was complete. Today, through Christ, with Him, and in Him, he makes priestly intercession in heaven for those who ask for it on earth.