Skip to content
HomeHoly Week 2020Preparation for the Paschal Triduum 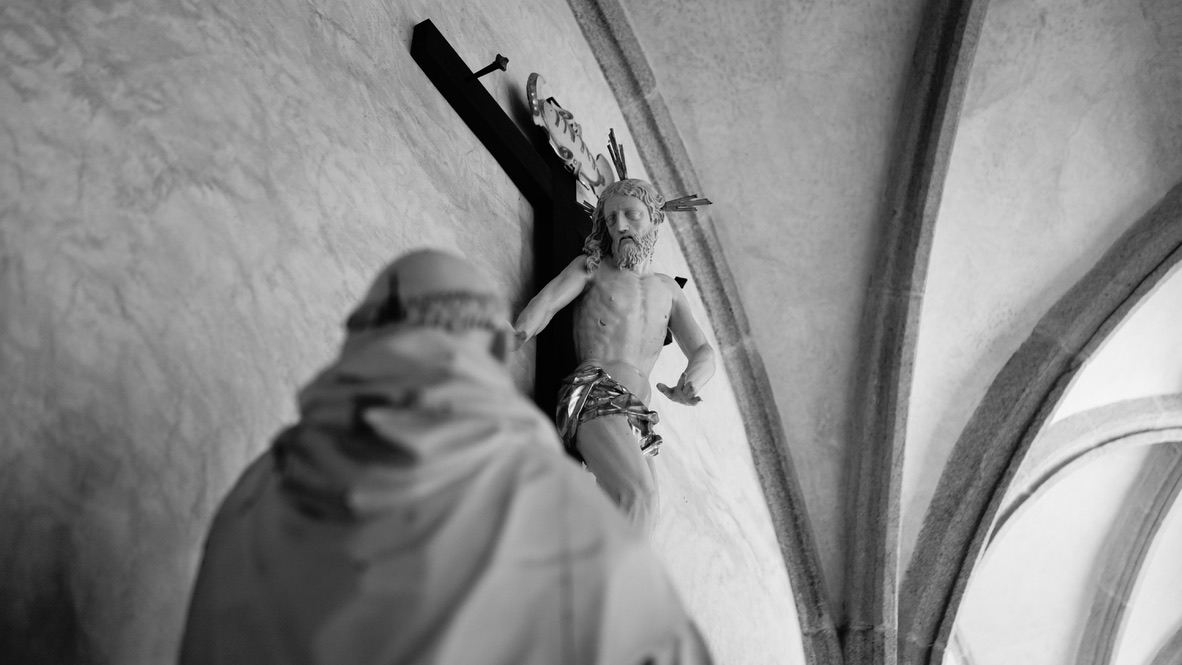 It is our custom to hold a special Chapter of Faults in preparation for the Sacred Paschal Triduum. There is something particularly poignant about this, and about all that will unfold in the most holy days, the “Days of Awe,” that are before us. Today’s Chapter of Faults is, in some way, a prelude to the Washing of the Feet tomorrow.

The Chapter of Faults by which we enter into the Sacred Paschal Triduum is meant to be life-changing. It does not communicate sacramental grace, but it is an occasion of grace, a significant moment in our life together. I should like to return to some of the things I said at the beginning of Passiontide: the foundation of our life together, and of our life with God, and in God, and for God, is humility. There is, before all else, the humility of the man who knows that he is a creature, that his very existence is suspended in the will of God. Each of us must learn to say, “If I exist at this moment, it is because God wills my existence. If God wills my existence, it is because He loves me.” After this, how can a man not respond by casting himself down in adoration and in submission, and by saying with Saint Michael, Quis ut Deus?

Saint Job the Long-Suffering is not only a figure of the Suffering Christ; he is also a model of adoration and submission. It is immensely significant that immediately after receiving the news of the loss of all his children, the last of the series of tragedies that befell him, Job arose, rent his garments, and having shaved his head, fell down and adored.

Tunc surrexit Job, et scidit vestimenta sua: et tonso capite corruens in terram, adoravit.
Then Job rose up, and rent his garments, and having shaven his head fell down upon the ground and adored. (Job 1:20).

It was only after having humbled himself and adored that Job opened his mouth to speak. This is the right order of things: only the man who first humbles himself, and adores with his face to the ground, can speak rightly.

And [Job] said: Naked came I out of my mother’s womb, and naked shall I return thither: the Lord gave, and the Lord hath taken away: as it hath pleased the Lord so is it done: blessed be the name of the Lord. In all these things Job sinned not by his lips, nor spoke he any foolish thing against God. (Job 1:21-22)

Even after Job was struck with terrible sufferings in his own body, he refused to curse and defy God. His wife taunted him for his adoration and submission, but Job remained immovable in both.

So Satan went forth from the presence of the Lord, and struck Job with a very grievous ulcer, from the sole of the foot even to the top of his head: And he took a potsherd and scraped the corrupt matter, sitting on a dunghill. And his wife said to him: Dost thou still continue in thy simplicity? bless God, and die. And he said to her: Thou hast spoken like one of the foolish women: if we have received good things at the hand of God, why should we not receive evil? In all these things Job did not sin with his lips. (Job 2:7-10)

Job’s utter ruin, his loss of all things, even to the slow destruction of his own body, make him the true icon of the Christus Passus, the image of Christ in the annihilation of His Passion. The words of Job in his sufferings are fulfilled in the words of Our Lord’s abandonment into the hands of the Father:

Etiam si occiderit me, in ipso sperabo.
Although he should kill me, I will trust in him. (Job 13:15)

Pater, in manus tuas commendo spiritum meum.
Father, into thy hands I commend my spirit. (Luke 23:46)

No one of us is spared a participation in the Passion of Christ. Saint Benedict says that we have come to the monastery for this very thing: “to share by patience in the sufferings of Christ, that we may deserve to be partakers of His kingdom” (Prologue). For one brother, it will be physical infirmities. For another, it will be mental anguish, or coldness, darkness, and weariness in prayer. For still another, it will be the inability to emerge from a wounded and wounding past, or the fear of advancing into a future full of uncertainties. These, and every other manner of suffering, are the means by which we enter into the prayer of Christ, and by which His prayer pierces our hearts and penetrates our lives. Only the humble man, the man brought low, the man cast to the ground, the man thrust into the netherworld, can receive the prayer of the suffering Christ:

Who in the days of his flesh, with a strong cry and tears, offering up prayers and supplications to him that was able to save him from death, was heard for his reverence. (Hebrews 5:7)

Another fruit of such a participation in the prayer of the suffering Christ is a readiness to own one’s own failings—in word, in deed, and in omission—and to ask pardon unconditionally. The humble man does not circumscribe his acts of contrition with preventions, conditions, and epilogues. He says simply and directly what needs to be said. In this, our model is the prodigal son. “Father, I have sinned against heaven, and before thee, I am not now worthy to be called thy son” (Luke 15:21). The father did not say, “Now, son, tell me in detail just how you have sinned against heaven and before me that I may make a record of it and refer to it in the future.” He did not even address his son with words. His embrace said all that needed to be said. Rather, he addressed the servants, saying:

Bring forth quickly the first robe, and put it on him, and put a ring on his hand, and shoes on his feet: and bring hither the fatted calf, and kill it, and let us eat and make merry: because this my son was dead, and is come to life again: was lost, and is found. (Luke 15:22-24)

Yet another fruit of participation in the prayer of the suffering Christ is the desire to make reparation, to put back what has fallen out of place; to restore what, through one’s own fault, came to be damaged; to make up for all that was refused, discounted, neglected, or forgotten. Our Lord’s words to the Simon the pharisee reveal what reparation is.

Simon: Dost thou see this woman? I entered into thy house, thou gavest me no water for my feet; but she with tears hath washed my feet, and with her hairs hath wiped them. Thou gavest me no kiss; but she, since she came in, hath not ceased to kiss my feet. My head with oil thou didst not anoint; but she with ointment hath anointed my feet. Wherefore I say to thee: Many sins are forgiven her, because she hath loved much. But to whom less is forgiven, he loveth less. (Luke 7:44-47)

Water for weary, soiled feet; tears; kisses; ointment; and much love. The impulse of reparation rises in the heart of one to whom many sins are forgiven. It rises in the heart of one who recognises the ravages of sin, first in himself, and then all about him: in the monastic family; in the Church beloved of Christ; and in the world into which God sent His Son, “not to reject the world, but so that the world might find salvation through Him” (John 3:17).

Let us, then, celebrate this Chapter of Faults, out of a place of adoration and submission; full of confidence in the plan of God; conscious of having failed one another knowingly and unknowingly. Let us ask Our Lord to grant us the first-fruits of a real participation in His prayer in the Cenacle, in Gethsemani, and from the altar of the Cross.

All kneel and say together:

Touched by the prayer of the suffering Christ, I humbly confess every fault by which I have weakened charity in our life together; or hurt or in any way diminished a Father or Brother; or troubled the peace that ought to prevail in the house of God. I further humbly confess my lack of zeal for the Work of God, my want of reverence in the presence of the Divine Majesty; my resistance to correction; my attachment to comforts; and my failure to live in thanksgiving and in ceaseless praise of the same Our Lord Jesus Christ.

And the Father Prior continues:

For unto this are you called: because Christ also suffered for us, leaving you an example that you should follow his steps. Who did no sin, neither was guile found in his mouth. Who, when he was reviled, did not revile: when he suffered, he threatened not: but delivered himself to him that judged him unjustly. Who his own self bore our sins in his body upon the tree: that we, being dead to sins, should live to justice: by whose stripes you were healed. For you were as sheep going astray; but you are now converted to the shepherd and bishop of your souls (1 Peter 2:21-25): Our Lord Jesus Christ who lives and reigns with the Father, in the unity of the Holy Ghost, one God, forever and ever. Amen.