Skip to content
HomeSeptuagesimatideWe are going up to Jerusalem 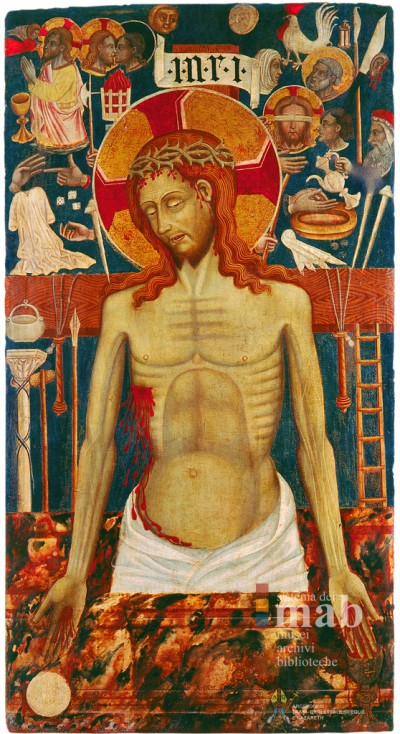 Today’s Benedictus Antiphon
This extraordinary tableau of Christ the Bridegroom (XVIth century) is found in the museum of the Cathedral of Barletta in southern Italy. I chose it to illustrate the poignant Benedictus Antiphon of Quinquagesima Sunday:

Behold, we are going up to Jerusalem, and all things that have been written concerning the Son of Man will be fulfilled. For He will be handed over to the Gentiles, and will be mocked and spit upon; and after they have scourged Him, they will put Him to death; and on the third day He will rise again.

The importance of this antiphon cannot be overstated. Drawn from the first part of the Gospel of Quinquagesima Sunday, it is sung just as dawn begins to colour the eastern sky. The whole Mystery of Christ rises before the eyes of the Church; she hears from His own mouth the prophecy of His Passion, Death, and Resurrection and, as she hears it, she beholds, with the eyes of faith, the image of her Bridegroom, in His extreme humiliation.

The Church gives her children this Benedictus Antiphon so that they, together with her Bridegroom, may set their faces toward Jerusalem, and go up with Him, obedient to the Father’s will and trusting in the unfolding of the divine plan.

The Mystery Made Visible
The Bridegroom Christ, crowned with thorns, is depicted in the profound humiliation of His Passion and Death, the very mystery that perdures in the Most Holy Sacrament of the Altar. See the wounds in His hands and in His side. He is in the Holy Sepulchre, the stone of which symbolizes the altar upon which the whole Passion of Christ is present in the Holy Sacrifice of the Mass.

Looking closely at the tableau from Barletta, we see from left to right around the figure of the Bridegroom Christ: the pillar of the scourging; the vinegar–soaked sponge on the reed; the scourge; the lance of the centurion Longinus; the cooking pot of Peter’s wife — when Peter tells his wife that the Lord will rise, she says that it is more likely that the chicken in her pot should rise out of it, the chicken does just that; the seamless garment, the hands that slapped Jesus and pointed Him out in mockery; a nail of the crucifixion; the dice rolled to determine who would have his tunic; the prayer of Jesus to the Father in Gethsemani; the betrayal by Judas; the soldier’s halberd; the fire near which Peter, warming himself, denied Jesus; the sun and moon, the cock that crowed; Saint Peter and his wife; the lantern of the soldiers in Gethsemani; the cut–off ear of Malchus; Jesus blindfolded and spat upon; Pilate washing his hands; Jesus struck with a reed; again, nails of the crucifixion; another scourage, the ladder by which the Body of Jesus was taken down from the cross.

A Holy Preaching of the Mystery of Christ
The Chant of the Church — in this case, today’s Benedictus Antiphon — is to the ear what authentic Christian iconography is to the eye. Chant and sacred iconography go hand in hand to offer the faithful a complete mystagogical catechesis. A Church stripped of its sacred iconography, a Church in which the age–old chants of the liturgy have been silenced, is a Church miserably impoverished. Chant and iconography belong to the Church’s sancta praedicatio. They are indispensable to the New Evangelisation today, just as they have been integral to the preaching of the Gospel in ages past.