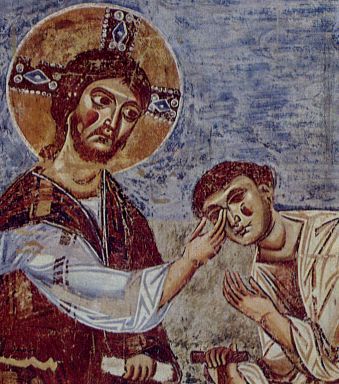 First Vespers of Quinquagesima Sunday
I was profoundly struck last evening by the antiphons and psalmody of First Vespers of Quinquagesima Sunday. Every antiphon — I have believed and taught this for years — is a kind of sacramental. It is a divine utterance that, as we chant it and hear it chanted, delivers what it announces. Here at Silverstream, we sing at First and Second Vespers during Septuagesimatide and Lent the four antiphons given in the Antiphonale Monasticum (1934) for Prime, Tierce, Sext. and None. This is immensely beneficial; it allows us to ponder the antiphons, all of which are taken from the Gospel of the day, not only at the Little Hours but also at the solemn hour of the sacrificium vespertinum, which would not otherwise have proper antiphons for the psalmody.

The antiphons are not, of course, mere text; they are a marriage of text and melody. The text becomes, thanks to the melody that emerges from it, a living word, a word capable of piercing the heart. Rabbi Abraham Joshua Heschel writes:

Music is the soul of language. A good sentence is more than a series of words grouped together. A sentence without a tone, without a musical quality, is like a body without a soul. The secret of a good sentence lies in the creation of a tonal quality to correspond to the meaning of the words. There has to be a harmony of the right tone and the right words.

The antiphons of the Divine Office are divinely ensouled by the music that brings them to life. They are not mere words grouped together. The text of the antiphon and the music that espouses the text produce together a living word capable of piercing the heart in a given moment of grace.

1. Iter faciente * Iesu, dum appropinquaret Iericho, caecus clamabat ad eum, ut lumen recipere mereretur.
While Jesus was on the road, as He drew near to Jericho, a blind man cried out to Him, that might receive light.

Jesus is on the road. We understand from the context of the Gospel of the Mass (Luke 18:31–43) that He is on the road to His passion, death, and resurrection. “Now we are going up to Jerusalem, and all that has been written by the prophets about the Son of Man is to be accomplished. He will be given up to the Gentiles, and mocked, and beaten, and spat upon; they will scourge him, and then they will kill him; but on the third day he will rise again” (Luke 18:31–33).

The blind man is begging on the outskirts of Jericho. Aware of the passing of Jesus, he cries out to Him. Here the text of the antiphon diverges from that of the Gospel. The antiphon says, ut lumen recipere mereretur — that he may be found worthy of receiving the light. Does not Saint Thomas Aquinas say in his magnificent prayer before Holy Communion: “Almighty and ever-lasting God, I approach the sacrament of Thy only-begotten Son, our Lord Jesus Christ. I come sick to the doctor of life, unclean to the fountain of mercy, blind to the radiance of eternal light, and poor and needy to the Lord of heaven and earth”?

2. Transeunte * Domino clamabat caecus ad eum: Miserere mei, Fili David.
As the Lord was passing by, a blind man cried out to Him, “Have mercy on me, O Son of David.”

The Lord is transeunte; he is passing by. This an occasion of grace that will not be repeated. The blind man’s choice is critical. He cries out. There are in every man’s life critical moments such as these, moments in which the Lord is passing by, moments in which one’s choice is critical. If one delays in responding to the Lord’s passage, one forfeits the unique grace of that moment. What must one say in such a moment?  Exactly what the blind man cried out: Miserere mei — Have mercy upon me.

3. Et qui praeibant, * increpabant eum ut taceret: ipso vero multo magis clamabat: Miserere mei, Fili David.
And they who were walking in front rebuked him to make him keep quiet, but he cried out all the louder, “Have mercy on me, Thou Son of David!”

Those walking in front: would not these have been the apostles? Jesus is hemmed in by His handlers. They want to protect Him from the importunate demands of the rabble. Jesus, however, does not see the rabble — faceless, nameless, and depersonalised — He sees each face, He searches out each heart. He hears the blind man’s cry.

The blind man is not daunted by Jesus’ entourage. He will not be silenced by those who want, above all else, to keep things moving along lest there occur anything spontaneous or unplanned. I have sometimes encountered among pious folk an inability to embrace the unexpected, an unwillingness to take risks and, above all, a need to control everything down to the last detail. How often has such an attitude impeded a great inbreaking of grace? The blind man shouts all the louder. He makes himself heard above the objections of the bureaucratic monitors who would prefer that he remain out of sight and out of earshot. The blind man is a great master of perseverance in prayer.

4. Caecus magis * ac magis clamabat, ut Dominus illuminaret.
The blind man cried out more and more, that the Lord might illumine him.

One must hear, or rather sing, the neums that bring these words to life. There are two key phrases in this short antiphon. The first phrase is magis ac magis, more and more. How easy it is to become discouraged in prayer to the point of praying less and less rather than more and more. If a man finds it hard to remain in prayer for five minutes, he must remain in prayer for ten. If one half hour seems too long, one needs to pray for the full hour. The world, the flesh, and the devil conspire to make Christian pray less and less; the Holy Ghost moves souls to pray magis ac magis, that is more and more, with ever greater intensity.

The second phrase is ut Dominus illuminaret — that the Lord might illumine him. Every true prayer is, at the deepest level, a prayer for light, a cry out of the darkness, a waiting upon the Lord to illumine all that, in oneself, lies under the shadow of sin and death. Never does Our Lord refuse a prayer for light. He may, for a time, leave a soul in apparent darkness, but that is only in order to prepare the eyes of the soul to see the brightness that shines from His Face. “There are many who say, Who will show us good things? The light of Thy countenance, O Lord, is signed upon us” (Psalm 4: 6–7).