Skip to content
HomeRule of Saint BenedictHow difficult and arduous a task (II:6) 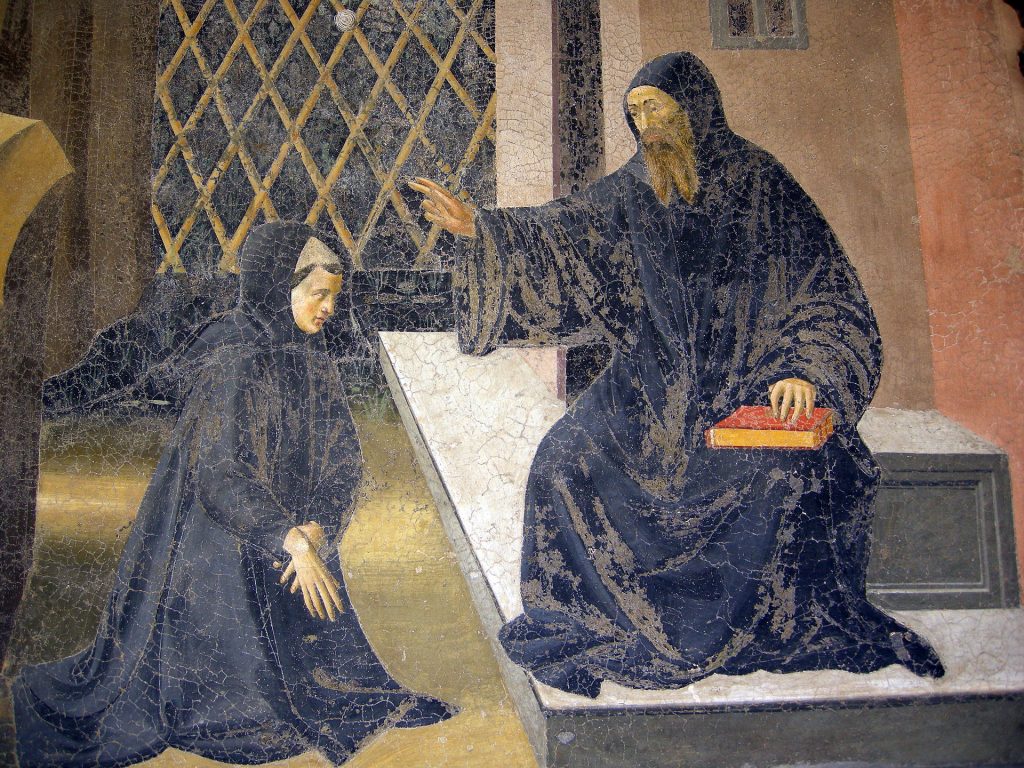 14 Jan. 15 May. 14 Sept.
The Abbot ought always to remember what he is, and what he is called, and to know that to whom more is committed, from him more is required; and he must consider how difficult and arduous a task he hath undertaken, of ruling souls and adapting himself to many dispositions. Let him so accommodate and suit himself to the character and intelligence of each, winning some by kindness, others by reproof, others by persuasion, that he may not only suffer no loss in the flock committed to him, but may even rejoice in their virtuous increase.

Saint Benedict returns to the principle of being what one is called. The abbot, believed to hold the place of Christ in the monastery, is bound, insofar as human frailty allows, and in humble reliance on grace, to be a father to his sons, a shepherd to the flock entrusted to him, a pontiff, i.e. a mediating priest, persevering in prayer before the altar and at the altar. The abbot can count on his grace of state, without however presuming that this grace of state is given him in an unconditional way. Grace builds on nature. The grace of state is given a man to heal his wounded nature and to develop the potentialities of sanctifying grace in view of the mission given him by God through the Church. The abbot must hold himself in readiness for the grace of state, ask for it in persevering prayer, and keep himself empty–handed and expectant before Our Lord. Again, Saint Aelred’s Pastoral Prayer exemplifies the prayer of an abbot in this regard.

To what greater peril can subjects be exposed,
than to a stupid and sinful superior?
Or—and this is more seemly to expect,
more pleasant to experience from kindness such as Thine—
didst Thou set such a person over Thy household, Lord,
in order that, if it should please Thy goodness,
to rule it well though him,
Thy mercy might be shown, Thy wisdom known,
the excellence of Thy power declared thereby
as Thine alone, not man’s;
and so the wise, the righteous, and the strong
should never glory in their wisdom, righteousness, and strength
as though they were their own;
for, when such persons rule Thy people well,
it is not they, but Thou, that rulest them.
Give not the glory unto us, O Lord, if this be so,
but unto Thine own Name. (The Pastoral Prayer, Part III)

The task of the abbot is difficult and arduous; it asks everything of him. He cannot rule souls without taking into account each one’s heredity, family background, education, personal history, infirmities, struggles, and needs. No two brothers are alike. I admire the practice of those monasteries that require of novices research into their genealogy and antecedents. It is important that a man know who his parents are and what they brought to their union in marriage from their respective lineages. In a certain sense a man brings his father and mother into the monastery with him, and in bringing his father and mother to the monastery, he brings also their parents, their grandparents, their great-grandparents, and an entire family history. A brother must know who he is and what he brings to the monastery. In former times, this would have been much easier. A man came from a particular family, rooted in a given place. Families had their homes, however humble; they had their identification with a particular village, or a town, a city, a region, and a country. Men were known for their profession, skills, and trades; these were often passed down from generation to generation. The industrial revolution, wars, and massive emigrations affected all of this. It often happens today that a man knows little of his ancestors, even of his grandparents and great-grandparents, and that he is ignorant of his antecedents.

The abbot must, as Saint Benedict says, “accommodate and suit himself to the character and intelligence of each”. The abbot cannot stand on lofty principles, expecting that all his monks will be able to rise to his exigencies. On the contrary, the abbot must meet each brother in his infirmities, contradictions, uncertainties, fears, failures, and sins. The abbot cannot work miracles; he can only pray, listen to the murmur of the Holy Ghost, return again and again to the letter of the Holy Rule, ask for help whenever he needs it, walk with each brother, and, like the Good Shepherd, carry the brother who is unable to walk.

A monastery is not ruled by reading the directions on the tin and following them. Were that it were so simple! Some brothers are to be treated with gentleness, others by reproof, others by using persuasion. To one brother the abbot must say “yes”, to another “no”, and to still another, “not now”. The end that the abbot must keep in view is that he lose not one of those whom God has entrusted to him. Saint Benedict says this explicitly: “that he may not only suffer no loss in the flock committed to him, but may even rejoice in their virtuous increase.”

Again I say to you, that if two of you shall consent upon earth, concerning any thing whatsoever they shall ask, it shall be done to them by my Father who is in heaven. For where there are two or three gathered together in my name, there am I in the midst of them. (Matthew 18:19-20)

There are, in this regard, two other things that I believe with all my heart: first, that many things are resolved by bringing them before Our Lord in the Most Blessed Sacrament. This may involve much waiting in silence, much listening, and much returning to the foot of the altar, but the perseverance in prayer will be rewarded. For this we have Our Lord’s own words in the Gospel that «we ought always to pray, and not to faint» (Luke 18:1). And I believe also that once a difficulty, a struggle, or any thing that to human eyes appears impossible, is entrusted to the Blessed Virgin Mary, we can be confident of an outcome that will in the end, turn to God’s glory. The words of the Angel to the Virgin of the Annunciation anchor our hope: «No word shall be impossible with God.» (Luke 1:37).