Skip to content
HomeRule of Saint BenedictI have not hidden Thy justice in my heart (II:2) 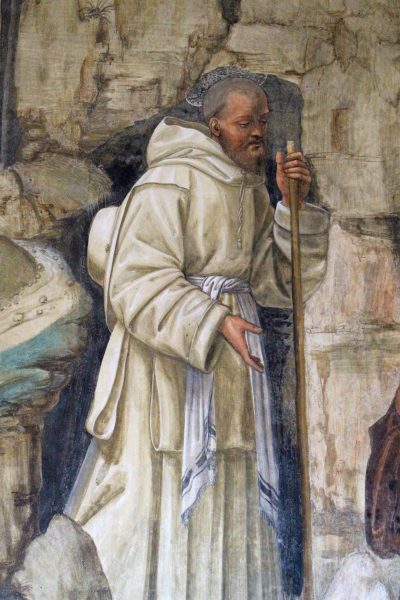 10 Jan. 11 May. 10 Sept.
Let the Abbot be ever mindful that at the dreadful judgment of God an account will have to be given both of his own teaching and of the obedience of his disciples. And let him know that to the fault of the shepherd shall be imputed any lack of profit which the father of the household may find in his sheep. Only then shall he be acquitted, if he shall have bestowed all pastoral diligence on his unquiet and disobedient flock, and employed all his care to amend their corrupt manner of life: then shall he be absolved in the judgment of the Lord, and may say to the Lord with the Prophet: “I have not hidden Thy justice in my heart, I have declared Thy truth and Thy salvation, but they contemned and despised me.” And then at length the punishment of death shall be inflicted on the disobedient sheep.

This portion of Chapter II should cause any abbot to tremble. The abbot is always to remember that he will be held accountable not only for his own teaching, but also for the obedience of his disciples. Saint Benedict is saying that if his monks are disobedient, the fault lies with the abbot. This is why the disobedience of a brother causes the abbot such sorrow and anguish. The man who sits in this chair must ask himself at every hour and in all circumstances: “What am I not doing that I ought to be doing? Am I failing any one of my sons? What more can I do for this troubled son of mine?” Only, says Saint Benedict, when the abbot shall have “bestowed all pastoral diligence on his unquiet and disobedient flock, and employed all his care to amend their corrupt manner of life,” will he be acquitted by Christ.

So, when the Prince of shepherds makes himself known, your prize will be that crown of glory which cannot fade. (1 Peter 5:4)

Saint Benedict seems to have been affected by the treachery and disobedience of the monks of Vicovaro until the end of his life. They asked him to come to them and to be their father. Saint Gregory recounts the events:

Long time he denied them, saying that their manners were divers from his, and therefore that they should never agree together: yet at length, overcome with their entreaty, he gave his consent. Having now taken on him the charge of the Abbey, he took order that regular life should be observed, so that none of them could, as before they used, through unlawful acts decline from the path of holy conversation, either on the one side or on the other: which the monks perceiving, they fell into a great rage, accusing themselves that ever they desired him to be their Abbot, seeing their crooked conditions could not endure his virtuous kind of government. Therefore, when they saw that under him they could not live in unlawful sort, and were loath to leave their former conversation, and found it hard to be enforced with old minds to meditate and think on new things: and because the life of virtuous men is always grievous to those that be of wicked conditions, some of them began to devise, how they might rid him out of the way. Taking counsel together, they agreed to poison his wine.

You know the rest of the story. Saint Benedict blessed the poisoned cup of wine. Immediately the cup broke into pieces, as if the blessing of the man of God had struck it with a stone. Saint Benedict addressed the rebellious brood:

Almighty God have mercy on you, and forgive you: why have you used me in this manner? Did not I tell you before hand, that our manner of living could never agree together? Go your ways, and seek ye out some other father suitable to your own conditions, for I intend not now to stay any longer among you.

And, to this, Saint Gregory adds one of the most beautiful and profound sentences in his book:

When he had thus discharged himself, he returned to the wilderness which so much he loved, and dwelt alone with himself, in the sight of his Creator, who beholds the hearts of all men.

When an enquirer or postulant resists conversion of life, even in little things, when he closes his ear and hardens his heart, it is a sign that his place is not in the cloister. I am not speaking here of struggles, nor of difficulties, nor of temptations. All of these things are quite normal and are to be expected. The abbot must be attentive and sympathetic; he will enlist the help of other fathers and brothers in welcoming and accompanying the enquirer or the postulant.

A novice, having been welcomed into the noviciate by the washing of his feet and clothing in the holy habit, is in an altogether different situation. By asking to become a novice, he declares his desire and his resolve to be prepared for monastic profession. A novice who closes his mind and heart to the teaching of the abbot, and who departs from the monastery, will always be like a miscarried child. His departure may prove to be the best thing that could have happened, but it leaves the community and the abbot sorrowful. The abbot, more than anyone else, save the Master of Novices, will feel the grief of such a loss. One cannot say, “But he was only a novice.” The novice is the embryo, the future monk in gestation. When I receive a man into the noviciate, after hearing the counsel of the professed monks, it is because I have reason to believe that he will persevere. I will never give the habit to one whose monastic future is doubtful, or compromised, or to one who bearing within himself the seeds of his own demise, resists every attempt to cure and strengthen him.

One a man has made profession, the bond between him and the abbot who clothed and professed him becomes something sacred and, in some way, divinely ratified. The abbot’s responsibility for a monk is immense. A monk is not an employee of the monastery. He is not a housemate, He is not someone labouring under contract, nor is he a colleague, nor a shareholder. He is a son of the household, he is a living stone fitted into the edifice.

You too must be built up on him, stones that live and breathe, into a spiritual fabric; you must be a holy priesthood, to offer up that spiritual sacrifice which God accepts through Jesus Christ. (1 Peter 2:5)

In some way, a monastery never recovers from the loss of a professed monk. The whole structure is weakened because there remains an empty space into which that particular living stone was fitted. Certainly, when a professed monk departs from the monastery or is obliged to go away, the abbot is left with a hole in his heart that even time will not heal. He must await the hour of judgment when Christ will ask him, “And what is this hole in your heart? What loss do I see there? Tell me of this son whom you lost.”

Saint Benedict says that the abbot is to bestow “all pastoral diligence on his unquiet and disobedient flock.” He is to persevere in fathering and shepherding the sons given him by the Lord, even when he meets with resistance and rejection. The abbot will learn to say with God himself:

Can a woman forget her infant, so as not to have pity on the son of her womb? and if she should forget, yet will not I forget thee. (Isaias 49:15)