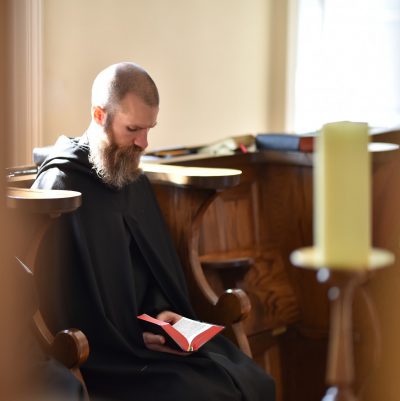 CHAPTER LIV. Whether a Monk ought to receive letters or tokens
6 Apr. 6 Aug. 6 Dec.

By no means let a monk be allowed to receive, either from his parents or any one else, or from his brethren, letters, tokens, or any gifts whatsoever, or to give them to others, without permission of the Abbot. And if anything be sent to him, even by his parents, let him not presume to receive it until it hath been made known to the Abbot. But even if the Abbot order it to be received, it shall be in his power to bid it be given to whom he pleaseth; and let not the brother to whom it may have been sent be grieved, lest occasion be given to the devil. Should any one, however, presume to act otherwise, let him be subjected to the discipline of the Rule.

A monk is not only a poor man in the sense of renouncing ownership. He also does without a multiplicity of things in order to attach himself to the Unum Necessarium, The One Thing Necessary (Luke 10:42). He is poor in this sense, but there is more. A monk freely sets aside the natural right of giving and receiving. This renunciation takes the monk to a much deeper level of poverty: the mystery of the κένωσις revealed in the poverty of the Host.

The Host is placed on the corporal by the hand of the priest; the Host is placed on the tongue of the communicant by the hand of the priest. There is neither giving nor receiving save by the mediating hand of the priest. The mediatorship of the abbot figures clearly in this Chapter LIV. A monk is not his own man. All his giving and receiving is by the will of another, the abbot. “They are permitted to have neither body nor will in their own power” (Rule, Ch. XXXIII). This radical renunciation of self–determination identifies a monk with the Sacred Host. A monk’s assimilation to Christ, the immolated Lamb, is most clearly manifested in his poverty, in his obedience, in his renunciation of all self–determination.

Chapter LIV treats, it is true, of things, and I would not want to make of it something removed from the materiality of ordinary life. A monk must, all throughout his life, and even daily, evaluate his use of things. To what extent are things cluttering my life? Have I allowed things to invade the spaces that have been allotted to me? Have useless things become like weeds choking the good growth of the seed that is the Word of God in my soul? Has the accumulation of things begun to obscure for me The One Thing Necessary?

The remedy for all such sadness is the contemplation of the Sacred Host in all Its naked poverty. “So also you now indeed have sorrow; but I will see you again, and your heart shall rejoice; and your joy no man shall take from you” (John 16:22). From that contemplation there rises a joy that the world cannot give.  Divine joy closes the door to the devil. Wheresoever the devil meets divine joy, he retreats. “As smoke vanisheth, so let them vanish away: as wax melteth before the fire, so let the wicked perish at the presence of God. And let the just feast, and rejoice before God: and be delighted with gladness” (Psalm 67:3–4).