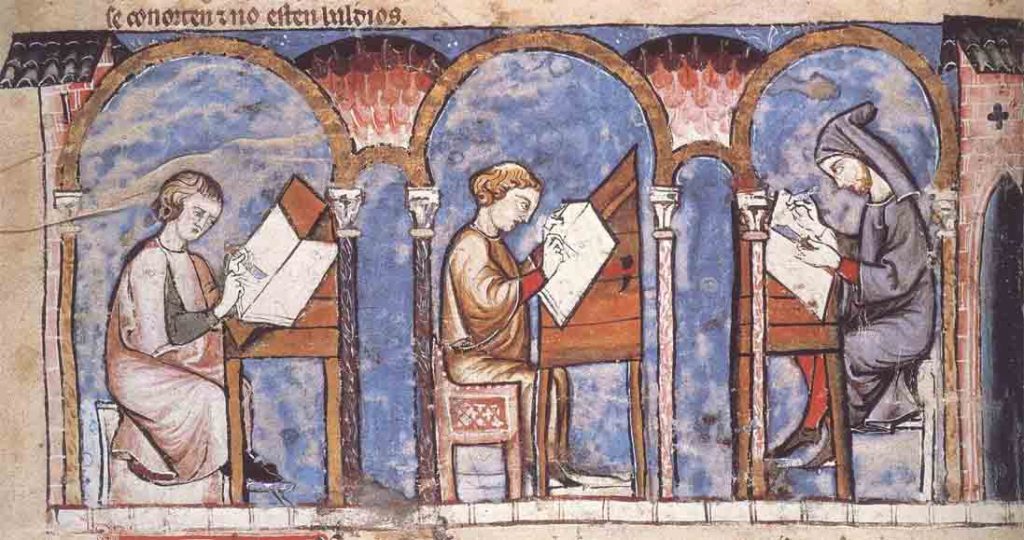 8 Apr. 8 Aug. 8 Dec.
For their bedding let a straw mattress, blanket, coverlet and pillow suffice. These beds must be frequently inspected by the Abbot, to see if any private property be discovered therein. And if any one should be found to have anything which he hath not received from the Abbot, let him be subjected to the most severe discipline. In order that this vice of private ownership may be rooted out entirely, let the Abbot supply them with all necessaries: that is, a cowl, tunic, shoes, stockings, girdle, knife, pen, needle, handkerchief, and tablets; so that all plea of wanting anything may be taken away. Yet let the Abbot always be mindful of those words of the Acts of the Apostles: “Distribution was made to everyone, according as he had need.” Let him, therefore, consider the infirmities of such as are in want, and not the ill-will of the envious. Nevertheless, in all his judgments, let him think of the retribution of God.

Saint Benedict provides his monks with comfortable bedding: a straw mattress, blanket, coverlet and pillow. The holy patriarch understands that a well–rested monk will pray better, work better, and be more cheerful, prompt, and companionable than one who has slept poorly. Here we are far from the primitive arrangements of the Desert Fathers.

The modest bedding of Saint Benedict’s monks must not, all the same, become a pretext for hiding things, hoarding them, or isolating oneself in a little nest of creaturely comforts. The temptation to surround oneself with all sorts of things reveals a deeper struggle: the fear of solitude and the inability to quiet oneself in the presence of God. The brother who is suffering from interior restlessness does well to repeat over and over again the words of the psalmist:

No rest has my soul but in God’s hands; to him I look for deliverance. I have no other stronghold, no other deliverer but him; safe in his protection, I fear no deadly fall. . . . Yet even now, my soul, leave thyself in God’s hands; all my trust is in him. He is my stronghold and my deliverer, my protector, that makes me stand unmoved. God is all my defence and all my boast; my rock-fastness, my refuge is in God. (Psalm 61:2–3, 6–8)

A monk’s peace in his cell is—I have always believed—proportionate to his openness to the sanctifying presence of the Immaculate Virgin Mary. Deinde dicit discipulo: Ecce mater tua. Et ex illa hora accepit eam discipulus in sua. “After that, he saith to the disciple: Behold thy mother. And from that hour, the disciple took her to his own” (John 19:27). The monk who dwells with Mary and who turns to her freque

Saint Benedict instructs the abbot to provide his monks with all that is necessary. The inventory is remarkably complete: a cowl, tunic, shoes, stockings, girdle, knife, pen, needle, handkerchief, and tablets. With profound psychological and spiritual insight, Saint Benedict adds: “so that all plea of wanting anything may be taken away”. A monastic cell is to contain what is necessary but must have nothing superfluous, lest the monk himself begin to feel that material things are crowding his space, inhibiting his interior freedom, and creating an impression of disorder.

The abbot is to recognise that not all his monks will have the same needs. He must know his sons well, and provide wisely for each one, giving more to one, less to another. The abbot may even, at times, be obliged to take away things once given if he perceives that the balance or good order of a brother’s life is threatened. He is, therefore, to “consider the infirmities of such as are in want, and not the ill-will of the envious”.

The abbot’s care must be to foster a context of life in which charity reigns over all else. Where there is charity, there will be unity, and where there is unity, the monastic family will rejoice in spiritual fruitfulness. Where charity is lacking, the monastic family will fall into murmuring, impatience, harsh words, coldness, criticism, resentments, grudges, and unspeakable vices of all sorts. Such a situation can only cause the monastic family to become sterile. We know the words of Lord concerning the fruitless branch: “He shall be cast forth as a branch, and shall wither, and they shall gather him up, and cast him into the fire, and he burneth” (John 15:6).