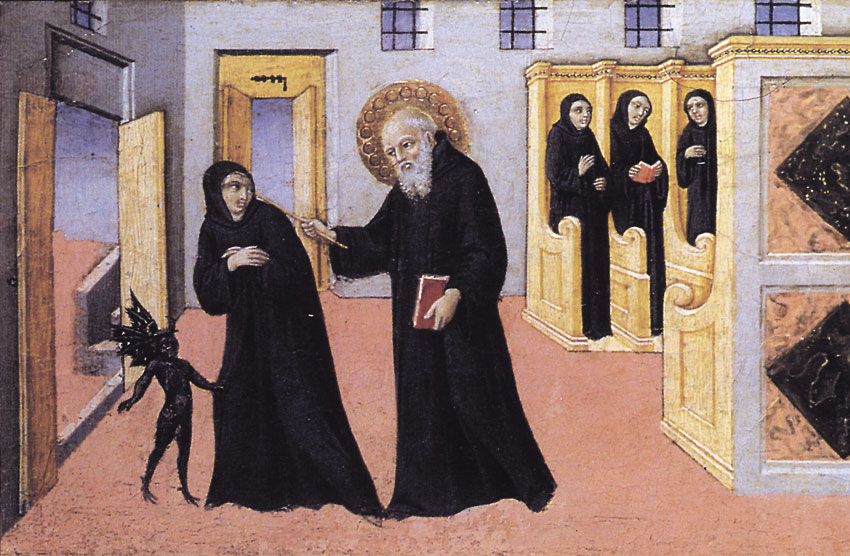 21 Apr. 21 Aug. 21 Dec.
Let him that hath been appointed Abbot always bear in mind what a burden he hath received, and to Whom he will have to give an account of his stewardship; and let him know that it beseemeth him more to profit his brethren than to preside over them. He must, therefore, be learned in the Law of God, that he may know whence to bring forth new things and old: he must be chaste, sober, merciful, ever preferring mercy to justice, that he himself may obtain mercy. Let him hate sin, and love the brethren. And even in his corrections, let him act with prudence, and not go too far, lest while he seeketh too eagerly to scrape off the rust, the vessel be broken. Let him keep his own frailty ever before his eyes, and remember that the bruised reed must not be broken. And by this we do not mean that he should suffer vices to grow up; but that prudently and with charity he should cut them off, in the way he shall see best for each, as we have already said; and let him study rather to be loved than feared. Let him not be violent nor over anxious, not exacting nor obstinate, not jealous nor prone to suspicion, or else he will never be at rest. In all his commands, whether concerning spiritual or temporal matters, let him be prudent and considerate. In the works which he imposeth, let him be discreet and moderate, bearing in mind the discretion of holy Jacob, when he said “If I cause my flocks to be overdriven, they will all perish in one day.” Taking, then, the testimonies, borne by these and the like words, to discretion, the mother of virtues, let him so temper all things, that the strong may have something to strive after, and the weak nothing at which to take alarm. And, especially, let him observe this present Rule in all things; so that, having faithfully fulfilled his stewardship, he may hear from the Lord what that good servant heard, who gave wheat to his fellow-servants in due season: “Amen, I say unto you, over all his goods shall he place him.”

Our father Saint Benedict says that the abbot is always to bear in mind what a burden he hath received — cogitet semper quale onus suscepit. This injunction sends the abbot straight to Christ who says, Venite ad me omnes qui laboratis, et onerati estis, et ego reficiam vos, “Come to me, all you that labor, and are burdened, and I will refresh you” (Matthew 11:28). The abbot’s first duty is to go to Christ, to abide with Christ, to live united to Christ. The abbot who has lost sight of this should lay aside the burden of his office. The abbot’s daily, hourly, and constant reference must be the words of Our Lord in the discourse on the night before He suffered:

“Abide in me, and I in you. As the branch cannot bear fruit of itself, unless it abide in the vine, so neither can you, unless you abide in me. I am the vine; you the branches: he that abideth in me, and I in him, the same beareth much fruit: for without me you can do nothing. If any one abide not in me, he shall be cast forth as a branch, and shall wither, and they shall gather him up, and cast him into the fire, and he burneth. If you abide in me, and my words abide in you, you shall ask whatever you will, and it shall be done unto you. (John 15:4–7)

“It beseemeth him more to profit his brethren than to preside over them”. The abbot is not a kind of autarch, issuing commands according to the wisdom of this world. Saint Benedict would have the abbot govern with pietas, that is, with the devotedness of a father to his sons and with a dutiful affection. The abbot’s desire and goal is that the whole monastic family “may in all things grow up in him who is the head, even Christ” (Ephesians 4:15). This means that the abbot may have to ask, and even exact, of his sons things that challenge them and oblige them to move beyond their fears, their comfort, and their self–imposed limitations.

The abbot, like the monk, must refer all things to Christ, that is, to the mystery of His Passion and Cross. The Cross is, at the end of the day, the only key that provides one with a true hermeneutic of monastic authority and obedience. The abbot must never seek to impose suffering on his sons; at the same time, every monk will, like Christ, have to pass through the crucible of a costly obedience. ”

“Who in the days of his flesh, with a strong cry and tears, offering up prayers and supplications to him that was able to save him from death, was heard for his reverence. And whereas indeed he was the Son of God, he learned obedience by the things which he suffered: and being consummated, he became, to all that obey him, the cause of eternal salvation. (Hebrews 5:7–9)

The abbot “must, therefore, be learned in the Law of God, that he may know whence to bring forth new things and old: he must be chaste, sober, merciful, ever preferring mercy to justice, that he himself may obtain mercy”. I cannot dwell today on each of these qualities — all of which are immensely necessary and important — but I should like to say something about one or two of them. Why does Saint Benedict insist on the virtue of chastity in the abbot? It is because nothing so renders a man spiritually blind as unchastity. Apart from this reference to the chastity of the abbot, Saint Benedict speaks little of chastity in the Holy Rule: in Chapter LXXII, he says, “Let them cherish fraternal charity with chaste love”, and in Chapter IV, he says succinctly: “To love chastity”, Castitatem amare.  Unchastity carries within itself the seeds of a multitude of disorders. Of all of these, spiritual blindness is the worst, especially when it afflicts one chosen to lead and to guide others.

Saint Benedict would also have the abbot be sober: this means not given to extremes, moderate, not hot and cold, one day enthusiastic and the next day listless, overbearing one moment and detached and absent the next. The abbot is to be merciful, “ever preferring mercy to justice, that he himself may obtain mercy”. Again, if the abbot is united to the merciful Christ, he will be merciful, for in Christ he will have what the Apostle calls viscera miserationis, what the Douai translation gives as “bowels of commiseration”, and what Knox renders as “feelings of tenderness and pity”. We come then to the most practical directives of this chapter:

Let him hate sin, and love the brethren. And even in his corrections, let him act with prudence, and not go too far, lest while he seeketh too eagerly to scrape off the rust, the vessel be broken. Let him keep his own frailty ever before his eyes, and remember that the bruised reed must not be broken.

I should like to take my inspiration from Saint Aelred, and turn this part of the chapter to prayer:

Lord Jesus Christ, most merciful of fathers, wisest of physicians, Thou who art not only the Doctor of Truth but the very Truth of all Thy Doctors, give me grace to hate sin and to love the brethren with an equal vehemence. Let me not compromise with sin, nor let me fail a single one of the sons whom Thou hast given me to love, to console, to support, and to encourage. Deliver me from seeking too eagerly to scrape off the rust, lest the vessel be broken. Let me, at every hour, keep my own frailty before my eyes, and my own heart lifted up to Thine in a ceaseless prayer for mercy. It hath pleased Thee to gather into this Thy workshop a collection of bruised reeds. By Thy hand alone can we be woven into a vessel fit for Thy grace. So long as I am charged with the care of such bruised reeds, let not one of them be broken. Let each one, rather, be bent and shaped to Thy purposes and so made fit for the designs of Thy mercy and the operations of Thy grace. Amen.