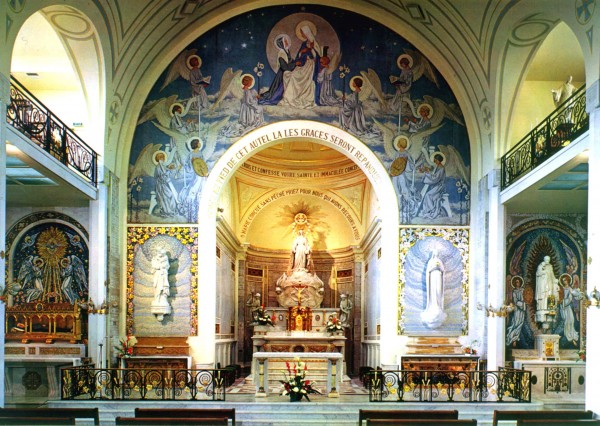 Our Lady of the Miraculous Medal
November 27th is the feast of Our Lady of the Miraculous Medal, the last Marian feast of the liturgical year and, in some way, the most eschataological. The apparitions of the Immaculate Mother of God to Saint Zoé Catherine Laboure, a Daughter of Charity, at the rue du Bac in 1830 announced the dawn of the great modern Marian age. The Propers of the Mass of today’s feast underscore its eschatological significance. In the Epistle we read:

And a great sign appeared in heaven: A woman clothed with the sun, and the moon under her feet, and on her head a crown of twelve stars. (Apocalypse 12:1)

Twelve Stars
Is it mere coincidence that the twelve stars of the Apocalyptic Woman–Clothed–With–the–Sun, and of the Miraculous Medal, should reappear in the flag of the European Union? I for one think it is no coincidence but, rather, a providential indication that the Woman–Clothed–with–the–Sun will have the last word, even as Our Lady promised at Fatima in 1917: “In the end my Immaculate Heart will triumph” (13 July 1917).

Local
The first level of the acknowledgement in the lex orandi that a particular alleged Marian apparition is free from error and worthy of pious credence is when a Proper Mass and Office are granted to commemorate it in the liturgical calendar of the diocese or religious Institute in which the event took place. Such feasts are found in many diocesan calendars: for example, Our Lady Reconciliatrix of Sinners on 19 September  for the diocese of Grenoble and the Missionaries of Our Lady of la Salette; Notre–Dame–du Chêne on 24 September in the archdiocese of Besançon; Notre–Dame–de–la–Bonne–Délivrance in Paris on 18 July; and Our Lady of Pontmain on 17 January in the diocese of Laval. 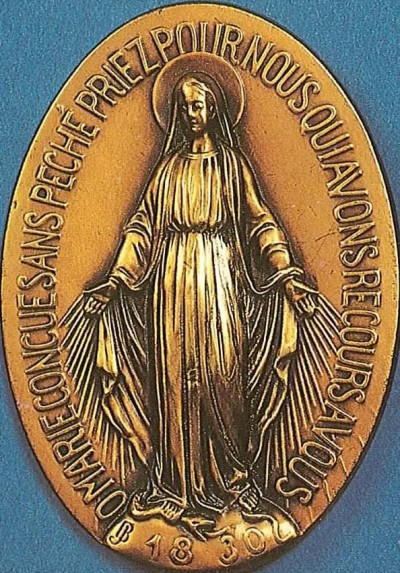 Universal
The highest level of the acknowledgement in the lex orandi that a particular alleged Marian apparition is free from error and worthy of pious credence is when a Proper Mass and Office are granted to a great number of particular places and religious Institutes the world over, or inserted into the universal calendar of the Church. Examples of such feasts would be Our Lady of Lourdes on 11 February; Our Lady of Fatima on 13 May or 13 October; and today’s feast of Our Lady of the Miraculous Medal.

Looking to the Propers of the Mass
The significance of the feast is spelled out in the texts of the Proper Mass:

Introit (Exodus 13:9)
It shall be a sign in thy hand, and as a memorial before thine eyes, and that the law of the Lord be always in thy mouth. Ps. 104: 1 O give thanks unto the Lord, and call upon His name: tell forth His deeds among the nations.

The miraculous medal is essentially a tiny icon of the Immaculate Mother of God. It bears the inscription of a prayer by which the Mother of God wants to be invoked: “O Mary, conceived without sin, pray for us who have recourse to thee”. On the back of the medal, a letter and drawings present the secret of Mary. The letter “M” is surmounted by a cross. The “M” represents Mary herself; the cross is the Tree of Life, the Altar of Calvary.  The two interwoven signs show the inseparable relationship that connects the Mary Immaculate, the New Eve to Jesus, the New Adam. At the bottom of the medal there are the two Hearts of Jesus and Mary. The Sacred Heart of Jesus is encircled by a crown of thorns; the Immaculate Heart of Mary is pierced through by the sword of sorrow foretold by Simeon in the temple. The imagery of the miraculous medal harks back to the great manifestations of the Sacred Heart of Jesus at Paray–le–Monial from 1673 to 1675 and announces the devotion to the Immaculate Heart of Mary that, in 1917, will become so central to the message of Fatima.

Collect
O Lord Jesus Christ, Who hast willed that the most blessed Virgin Mary, Thy mother, sinless from the first moment of her conception, should be glorified by countless miracles: grant that we, who never cease from imploring her patronage, may attain in the end to eternal happiness. 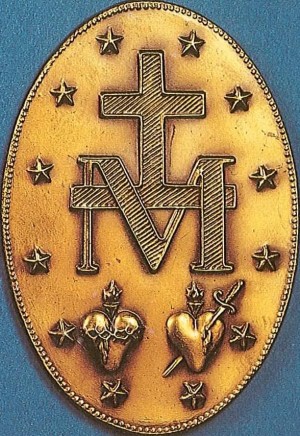 The so–called miraculous medal, although it dates from the apparitions in Paris in 1830, is a means of venerating the mystery of the Immaculate Conception, the dogma defined infallibly 1854, by Blessed Pope Pius IX in his papal bull Ineffabilis Deus. Already, on January 20, 1842, the miraculous medal was the means by which the Mother of God disposed Alphonse Ratisbonne to see her in the Roman church of Sant’Andrea delle Fratte and be converted from Judaism to the Catholic faith. The medal is also linked to Lourdes where, on 25 March 1858, the Mother of God revealed her identity to Saint Bernadette, saying, “I am the Immaculate Conception”.

Epistle
Lesson from the Book of the Apocalypse of blessed John the Apostle. A great sign appeared in heaven: a woman clothed with the sun, and the moon under her feet, and on her head a crown of twelve stars. And she brought forth a Man-Child, Who was to rule all nations with an iron rod: and her Son was taken up to God, and to His throne. And there were given to the woman two wings of a great eagle, that she might fly into the desert unto her place. And the serpent cast out of his mouth after the woman, water as it were a river: that he might cause her to be carried away by the river. And the earth helped the woman, and the earth opened her mouth, and swallowed up the river, which the dragon cast out of his mouth.

The Woman–Clothed–with–the–Sun appeared to Saint Catherine Labouré as the Mediatrix of All Graces. The Blessed Virgin showed herself standing upon a globe and said, “The globe that you see represents the entire world, and particularly France, and every single person”. The Immaculate Virgin is the great sign that appeared in heaven; from her virginal hands graces are spread abroad upon all who ask for them. Even for those who do not seek the help of the Mother of God there are graces stored up, graces that she waits to distribute to those who approach her with childlike confidence and call upon her name.

Gradual (Psalm 104:5, 27) and Alleluia (Psalm 18: 7)
Remember the marvelous works which He hath done: His wonders, and the judgments of His mouth. V. He placed in them the words of His signs: and of His wonders in the land.
Alleluia, alleluia. V. (Psalm 18: 7) His going forth is from the topmost Heaven: nor is there any that can hide from His heat. Alleluia.

Gospel (John 2:1–11 )
At that time there was a marriage in Cana of Galilee: and the Mother of Jesus was there. And Jesus also was invited, and His disciples, to the marriage. And the wine failing, the Mother of Jesus saith to Him: “They have no wine.” And Jesus saith to her: “Woman, what is that to Me or to thee? My hour is not yet come.” His Mother saith to the waiters: “Whatsoever He shall say to you, do ye.” Now there were set there six water-pots of stone, according to the manner of the purifying of the Jews, containing two or three measures apiece. Jesus saith to them: “Fill the waterpots with water.” And they filled them up to the brim. And Jesus said to them:”Draw out now, and carry to the chief steward of the feast.” And they carried it. And when the chief steward had tasted the water made wine, and knew not whence it was, but the waiters knew who had drawn the water: the chief steward calleth the bridegroom, and saith to him: “Every man at first setteth forth good wine: and when men have well drunk, then that which is worse: but thou hast kept the good wine until now.” This beginning of miracles did Jesus in Cana of Galilee and manifested His glory, and His disciples believed in Him.

The Gospel recounts the first clear instance of the maternal mediation of the Blessed Virgin Mary. She speaks to her Son on behalf of the newly–wedded couple. At His Mother’s bidding, Jesus manifests His glory ahead of time, causing His disciples to put their faith in Him. The paradigm revealed in this Gospel is for all times, all places, and all men. Wheresoever Mary is invited, she enters in and, with her maternal heart, takes the measure of all around her. She speaks on behalf of those who invite her to be present in their lives, obtaining wondrous favours from the Heart of her Son. At the prayer of the Mother, the Son manifests and glory, and the disciples of the Son grow in faith.

Offertory (John 19:27)
Jesus said to the disciple, Behold thy Mother. And from that hour the disciple took her for his own.

Secret
O Lord God, who moved by the pleading of the Blessed Virgin Mary, in answer to whose prayers Jesus Christ Thy Son wrought the first of His miracles: vouchsafe that we may confect with pure minds the sacrament of the Body and Blood of the same Thy Son, so as to deserve to partake of the banquet of eternity.

The petition of every priest as he enters into the mystic solitude of the Canon of the Mass is that he might confect with a pure mind the sacrament of the Body and Blood of the Lord. One of the graces given to priests through Mary is the cleanness of mind required to offer the Holy Sacrifice.

Communion (Ecclesiasticus 36:6, 7, 10)
Renew the signs, and work fresh marvels; glorify Thy hand and Thy right arm; hasten the time, and remember the end, and let them declare Thy wondrous works.

The Communion antiphon is addressed to Christ, but also to His Immaculate Mother. It is not unfitting to ask Mary to “renew the signs, and work fresh marvels”.

Postcommunion
O Lord, Almighty God, Who hast willed that all things should be given us through the Immaculate Mother of Thy Son: grant that under the protection of so great a Mother, we may escape all the dangers of these present times, and come, in the end, to life everlasting.

The last line of the Postcommunion is particularly suited to these days: “grant that under the protection of so great a Mother, we may escape all the dangers of these present times, and come, in the end, to life everlasting”. It is a prayer for the people of Paris, a prayer for France, for Europe, and for the world,