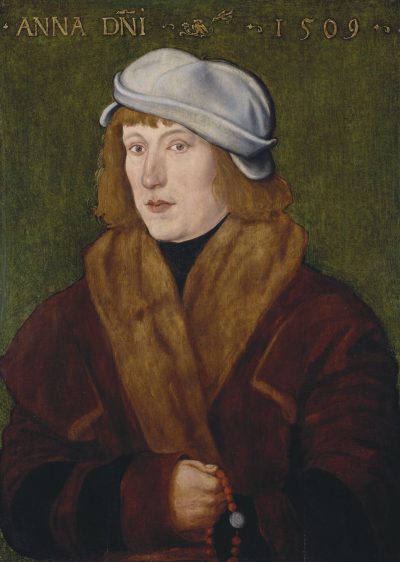 German artist Hans Baldung Grien depicts a prosperous young fellow wearing what appears to be a velvet coat with a warm fur collar. The pearl grey cap nicely sets off his reddish hair and picks up the grey blue of his eyes. The young man’s Rosary beads are, in some way, central to the whole painting. The hand emerging from the russet sleeve draws the eye to the beads. He is right in the middle of a decade of the Rosary, having completed five Aves. His Rosary, with the large pearl grey Pater bead is beautifully crafted; it looks, in fact, like it might have come from The Rosary Workshop.

If you allow your eye to travel up from the large Pater bead to the very top of the painting you will discover there a small stylized image of an owl attacking a bird on a branch. What is the painter saying? Is it a kind of heraldic device or signature? Or is he intimating that the prayer of the Rosary comes between the soul, depicted by the bird, and the attacks of the devil, represented by the owl, a bird of the night? Is he suggesting that the young man is using the Rosary to pray his way out a conflict? Perhaps. But another meaning is also possible. The owl can be an image of Christ who chooses to hide Himself in the dark night of faith. Christ, Eternal Wisdom, comes not to attack the soul praying like a bird on a branch, but to make His mystic presence known.

I, for one, do not see conflict on the young man’s face. It seems to me that he is pondering one of the mysteries of the Rosary, even as he ponders his own future. The beads passing through his fingers bespeak the passage of time. Perhaps, the Rosary has induced him to make a change in his life? Will he forsake his fashionable coat and cap for the habit of monastic conversion? One wonders if the Rosary was not for him the means of a gradual conversion. Nothing attacks the knotty roots of the seven capital sins as effectively as the prayer of the Rosary. The Rosary is the undoing of pride. An old confessor of mine, Father Cajetan Sheehan, O.P., after every confession used to ask, leaning into the grate of the confessional, “Do you pray the Rosary, son?” “Yes, Father,” I would reply. “Good, son. Then everything will turn out alright. Pray the Rosary.” I imagine this young man’s confessor said the very same thing to him.