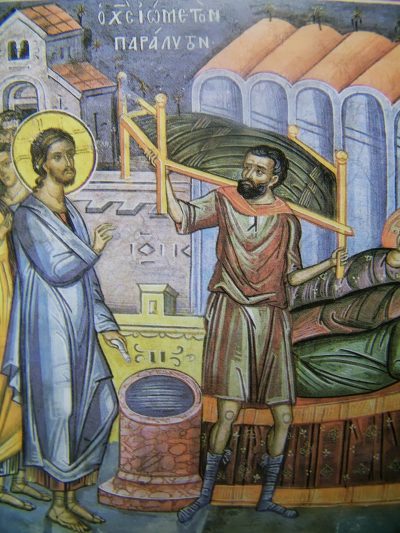 CHAPTER XVIII. In What Order the Psalms Are to Be Said
24 Feb. 25 June. 25 Oct.
The order of psalmody for the Day-Hours being now arranged, let all the remaining 25 Psalms be equally distributed among the seven Night Offices, dividing the longer Psalms among them, and assigning twelve to each night. Above all, we recommend that if this arrangement of the Psalms be displeasing to anyone, he should, if he think fit, order it otherwise; taking care in any case that the whole Psalter of a hundred and fifty Psalms be recited every week, and always begun afresh at the Night Office on Sunday. For those monks would shew themselves very slothful in the divine service who said in the course of a week less than the entire Psalter, with the usual canticles; since we read that our holy fathers resolutely performed in a single day what I pray we tepid monks may achieve in a whole week.

With this section of Chapter XVIII, our father Saint Benedict completes his distribution of the 150 psalms over the course of the week. This being done, he shows his humility and reasonableness by allowing for a different arrangement of the psalms, but under one immutable condition: that the whole Psalter of a hundred and fifty Psalms be recited every week, and always begun afresh at the Night Office on Sunday. So clear is Saint Benedict on this particular point, that one cannot depart from the principle of the recitation of the whole Psalter of a hundred and fifty psalms over the week, without stepping outside the margins of the Holy Rule. The distribution of the Psalter over one week is one of the very few non-negotiables laid down by Saint Benedict.

Why is Saint Benedict so insistent on this principle? He explains: “Those monks would shew themselves very slothful in the divine service who said in the course of a week less than the entire Psalter, with the usual canticles; since we read that our holy fathers resolutely performed in a single day what I pray we tepid monks may achieve in a whole week.” It is clear, then, that Benedictines are bound to pray the Psalter in its entirety weekly.

Wonderful benefits accrue from the weekly repetition of the Psalter: the psalms become familiar, sometimes to the point of being memorised; the taste of them lingers for a long time on the palate of the soul; they become the ground of an authentic Christian contemplation, for by them, the prayer of Christ passes into us, and we pass into His prayer to the Father.

There is another consideration that I should like to bring forth, one that is not unrelated to this final section of Chapter XVIII. The good Benedictine monk is not one who performs flawlessly in order to become the matchless expression of a lofty ideal. He is rather, one who, experimentally and sometimes painfully aware of his infirmity, goes forward nonethless, marking his progress and even his falls by the rhythm of an irrepressible appeal to Divine Grace. Deus, in adiutorium meum intende! Domine, ad adiuvandum me festina! The immutable structure of the Divine Office — 150 Psalms in one week, and eight offices in one day — becomes the regular heartbeat that sustains each man in his weakness, lifting him after his falls, and bringing him back, again and again, “to the throne of grace, there to obtain mercy, and find grace in seasonable aid” (Hebrews 4:16).

This is why even the sick brother, and the brother working at a distance from the Oratory, and the brother sent on a journey must “not allow the appointed Hours to pass by; but, as far as they can, observe them by themselves, and not neglect to fulfil their obligation of divine service” (Chapter L). There are circumstances, especially in cases of illness, or mental exhaustion, or acute anxiety, when it is impossible to read the Office. The brother who finds himself unable to read the Office will take up the beads and, at least, try to replace his servitutis pensum, his bounden service, with one or more decades of Our Lady’s Psalter, the Holy Rosary. The Mother of God receives with a piteous goodness the humble offering of the brother who can do more than tell his beads, and even this imperfectly. All that is offered her, she presents to her Son, the Eternal High Priest. Nothing is lost of the weak man’s tribute; it is like the offering that the poor widow cast into the Temple treasury.

And he looked up, and saw the rich folk putting their gifts into the treasury; he also saw one poor widow, who put in two mites. Thereupon he said, Believe me, this poor widow has put in more than all the others. The others all made an offering to God out of what they had to spare; she, with so little to give, put in her whole livelihood. (Luke 21:1–4)

One of the lessons that must be learnt rather sooner than later in the monastic journey is that among the devil’s most effective tools is a certain perfectionism. Perfectionism is but a manifestation of spiritual pride. The devil pushes a man along this path until he manipulates him into making sweeping “all or nothing” statements. Examples:

• “I am a total failure”. The devil claps his hands gleefully and says, “Yes, you are”. The spiritual father says, “No, son, you are not a total failure. You fail sometimes, but not always. It is good that you should experience your weakness, if by it you become dependent on Our Lord’s mercy. It is salutary that you should fall, if by it you learn to let Our Lord lift you up.”

• “I can’t do anything right”. Music to the devil’s ears. “Of course you can’t”, he says, “You might as well give up. You are wasting your life trying to do something that you will never be able to do right”. The spiritual father says, “No son, you do some things very well, others thing quite acceptably. In other things you miss the mark altogether. Don’t expect a perfect score. Do what you can, and give the rest to Our Lord’s merciful Heart. What you count a deficit, He changes into a credit, provided that you give him everything, including the bits of your life that are untidy and soiled. Give Our Lord the very things that, in your pride and perfectionism, you want to sweep under the carpet, and conceal from His sight.

• “My life is a mistake. I am condemned to misery and unhappiness for the rest of my days”. The devil loves this line of thinking. It comes straight from hell and leads to hell. The spiritual father goes on to say: “‘A just man shall fall seven times and shall rise again’ (Proverbs 24:16). If you were to do nothing but fall and get up again throughout your whole monastic life, your life will not have been a mistake. It will have been a testimony to grace.

A certain brother asked Abba Sisoes: “Counsel me, Father, for I have fallen to sin. What am I to do?” The Elder said to him: “When you fall, get up again.” With bitterness the sinning brother continued: “Ah! Father, I got up, yet I fell to the same sin again.” The Elder, so as not to discourage the brother, answered: “Then get up again and again.” The young man answered with a certain despondency: “How long can I do that, Father?” The Elder, giving him courage, said to the brother: “Until the end of your life.”

The man who thinks he is condemned to misery and unhappiness is the very man to whom God waits to show mercy. He is the man for whom God has prepared an inexhaustible treasury of happiness. The prideful man says, “I am so perverse that my misery exceeds the mercy of God.” And he adds, “There is no happiness for the likes of me.” Both statements are an affront to Our Lord and, because they proceed from pride, are an impediment to His grace. Say rather, “My life is a long history of mistakes, but for every mistake of mine God has prepared a corresponding grace of His. I have my miserable moments, and hours, and days, but for each of these there is a moment, and an hour, and a day of grace. I am familiar with unhappiness and, at times, feel that I have lost my footing and sunk into it up to my neck, but I shall continue to believe that God wills my happiness, and I shall hope against hope, that what He wills for me, He will give Me, provided that I lift up to Him my empty hands. And even if I haven’t the strength to raise my hands, I shall lift up my eyes, trusting Him to read through my tears the Act of Hope that my lips cannot pronounce.”

I say all of these things about thoughts, and dejection, and hope, and beginning again and again, because the weekly Psalter, begun again and again over the lifetime of a monk, is a powerful means to the expulsion of interior words of condemnation with words of hope; of the replacement of self–absorption with the praise of God; and of the stilling of the chaos that threatens a man’s soul with the silence of adoration. The monk who begins his Psalter again and again will never be without a reason to hope, a reason to praise, and a reason to adore.