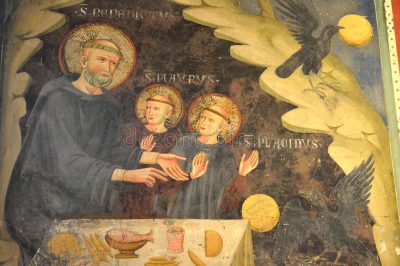 In our Benedictine calendar, October 5th is the feast of Saint Placid, and January 15th the feast of Saint Maur, both of them young disciples of Our Father Saint Benedict. Who are Maur and Placid and how do we know them? Saint Gregory the Great introduces them in his Life of Saint Benedict in the Second Book of the Dialogues. Saint Gregory explains that, after the holy Benedict had established his twelve monasteries at Subiaco, noble Christians came from Rome, presenting their sons to be raised and educated among the monks. The irony of this would not be lost to us. Saint Benedict abandoned his studies in Rome as a young man; now prominent Romans come to him, asking him to educate their sons.

Among the boys entrusted to Saint Benedict were Maur, an adolescent, the son of Euthicus, and Placid, the son of the patrician Tertullus. Maur quickly became Abbot Benedict’s trusted helper whereas Saint Gregory specifies that Placid was in “early childhood.” Picture for a moment the rite of the Oblation or Monastic Profession of little Placid. It is intimately tied into the Holy Sacrifice of the Mass, taking place at the Offertory. We know exactly what was done from Chapter 59 of the Rule.

If it happens that a nobleman offers his son to God as a monk, and the child is still of tender age, the parents should make out the petition. . . . They should wrap this petition and the boy’s hand together with the Mass offering in the altar cloth (the corporal) and offer him in that way” (RB 59:1).

Little Placid’s father probably had to lift him up in his arms to reach the mensa of the altar. The poor little fellow must have been in awe of the solemn fuss being made of him. The Benedictine vocation is essentially Eucharistic. From his most tender years, Saint Placid lived from the altar and for the altar. The child Placid was offered at the altar and then lived out, over a lifetime, his mystical identification with Christ, the hostia perpetua, by a life of stability, conversion of manners, and obedience.

Saint Benedict recognized the potential in Placid. Saint Gregory tells us that he chose the boy Placid to accompany him in a long nocturnal prayer on the mountain. The solitary prayer of Saint Benedict imitates that of Jesus. “Jesus, rising early before dawn, went off to a deserted place where he prayed” (Mk 1:35). It is worth pondering how Placid’s experience of seeing Saint Benedict pray by night must have marked him for life. Little boys are sensitive to such things. “Accompanied by the little Placid,” Saint Gregory says, “Benedict climbed the mountain.” The allusion to Abraham and Isaac is clear enough.

So Abraham rising up in the night, saddled his ass: and took with him two young men, and Isaac his son: and when he had cut wood for the holocaust he went his way to the place which God had commanded him. And on the third day, lifting up his eyes, he saw the place afar off. And he said to his young men: Stay you here with the ass: I and the boy will go with speed as far as yonder, and after we have worshipped, will return to you. And he took the wood for the holocaust, and laid it upon Isaac his son: and he himself carried in his hands fire and a sword. And as they two went on together, Isaac said to his father: My father. And he answered: What wilt thou, son? Behold, saith he, fire and wood: where is the victim for the holocaust? And Abraham said: God will provide himself a victim for an holocaust, my son. So they went on together. (Genesis 22:3-8)

The most famous story of Maur and Placid has to do with the little fellow going to fetch water in the lake. He falls into the water. Saint Benedict is made aware of the situation by a kind of charismatic clairvoyance. He sends Brother Maur to rescue the child Placid. Maur, having received his abbot’s blessing, runs over the surface of the water, grabs Placid by the hair, pulls him out, and then runs back over the water to dry land, carrying the little one in his arms. Saint Benedict attributes the miracle to Maur’s obedience. Maur says it was due to the virtue of Saint Benedict. Then the little Placid pipes up and settles the debate. “When you pulled me out of the water, he says, I saw over my head Father Abbot’s hood, and I saw that it was he who pulled me from the water.”

What is most significant, I think, in the stories of Saint Placid is that he persevered in seeking God. If Saint Placid persevered over a lifetime in seeking God, he would have suffered temptation and darkness. He would have had many opportunities to put into practice the most precious of Saint Benedict’s counsels: Et de Dei misericordia numquam desperare. “And never to despair of the mercy of God” (Chapter IV:74). Tested by suffering, Saint Placid became able to help those who are being tested. Perhaps this is why he became such a beloved patron of Benedictine novices everywhere.

The sign of the mature monk—the nonnus, to use Saint Benedict’s word for a senior in the monaster — is his capacity for compassion, his ability to identify with weakness, to sympathize with suffering and above all, his refusal to judge. We know nothing of the old age of Saint Placid, but I see him as a wise old nonnus. I see his youthful face grown wrinkled and his beard white, but in his eyes dances the flame of his first love, the interior fire kindled from the altar, set ablaze by the Holy Sacrifice of the Mass on the day Saint Benedict welcomed him into the monastery. It is this Eucharistic fire that, burning in us, will consume all that is harsh, unbending, and ready to judge, leaving only the pure flame of a mercy that sheds light and gives warmth. Lucens et ardens (John 5:35). The Eucharistic vocation of Saint Placid bears witness to what Abba Joseph said to Abba Lot: “You cannot be a monk unless you become like a consuming fire.”