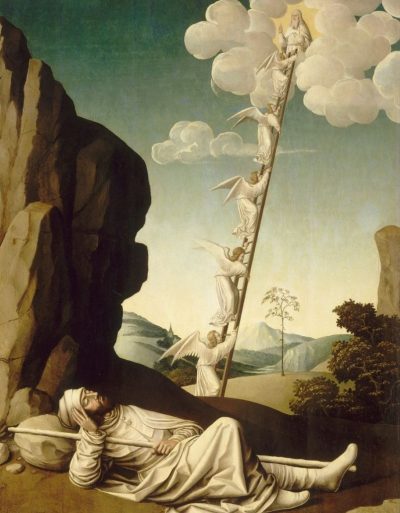 Saint Benedict opens Chapter VII by quoting the parable of the wedding feast:

And he spoke a parable also to them that were invited, marking how they chose the first seats at the table, saying to them: When thou art invited to a wedding, sit not down in the first place, lest perhaps one more honourable than thou be invited by him: And he that invited thee and him, come and say to thee, Give this man place: and then thou begin with shame to take the lowest place. But when thou art invited, go, sit down in the lowest place; that when he who invited thee, cometh, he may say to thee: Friend, go up higher. Then shalt thou have glory before them that sit at table with thee. Because every one that exalteth himself, shall be humbled; and he that humbleth himself, shall be exalted. (Luke 14:7–11)

Saint Benedict’s choice of this parable suggests that the call to the monastic life is like an invitation to a wedding feast. One entering the monastery does well to take the very last place. It is an immense grace and a sign of God’s predilection to have been called to the monastic life for it is, in effect, a foreshadowing and a foretaste of that heavenly banquet concerning which Saint John heard these words: “Blessed are they that are called to the marriage supper of the Lamb” (Apocalypse 19:9). The only response worthy of such an invitation is a profound humility. “But when thou art invited, go, sit down in the lowest place; that when he who invited thee, cometh, he may say to thee: Friend, go up higher” (Luke 14:10). In entering the monastery the logic of the world is turned upside–down and the logic of the Magnificat becomes operative:

He hath shewed might in his arm: he hath scattered the proud in the conceit of their heart. He hath put down the mighty from their seat, and hath exalted the humble. He hath filled the hungry with good things; and the rich he hath sent empty away. (Luke 1:51–53)

This fits perfectly with what follows the parable of the wedding feast. Our Lord draws his conclusion and so illustrates the mystery of the Divine Hospitality:

When thou makest a dinner or a supper, call not thy friends, nor thy brethren, nor thy kinsmen, nor thy neighbours who are rich; lest perhaps they also invite thee again, and a recompense be made to thee. But when thou makest a feast, call the poor, the maimed, the lame, and the blind. (Luke 14:12–13)

Saint Benedict would have us understand that a monastery is a hospice wherein poor and fragile sinners become the house guests of God. A monastic vocation is a call to experience the Divine Hospitality. For this to happen there is but one thing required: that a man go to the last and lowest place and that he remain there, trusting that at the appointed hour he will find himself lifted up to a higher place by the strong and gentle arm of God, mindful of His mercy. Suscepit Israël puerum suum, recordatus misericordiæ suæ (Luke 1:54). This is the very discovery that Saint Thérèse made. She writes:

In rich homes there are elevators that replace stairs to great advantage. I would also like to find an elevator to lift me up to Jesus, because I’m too little to climb the rough staircase of perfection. The elevator that must lift me up to heaven is Your arms, Jesus! For that I don’t need to become big. On the contrary, I have to stay little.

The man who comes to the monastery thinking that he will ascend the staircase of perfection with great strides, and so arrive before everyone else at the summit of perfection, will be shocked when the One who invited him, comes and says to him, “Give this other man place”. Then, as the Gospel says, the man who put himself forward, trusting in his virtue, will blush with shame and skulk down to the lowest place where God was waiting for him all along. Above today’s appointed passage from the Holy Rule, in a kind of counterpoint, we hear the words of the Apostle:

Gladly therefore will I glory in my infirmities, that the power of Christ may dwell in me. (2 Corinthians 12:9)
By the grace of God, I am what I am; and his grace in me hath not been void (1 Corinthians 15:10).

The abbot is obliged to confront the man who thinks himself perfect, who places himself in the first place because, in his estimation, this is where he merits to be. The first place is never won, nor is it merited; it is freely offered to the one who thinks himself least deserving of it. By the grace of God, I am what I am; by the grace of God, I am where I am. The great Patriarch of Western Monasticism smiles at the little Carmelite of Lisieux, the youngest Doctor of the Church.  Saint Benedict would have each of us learn and live the psalm of spiritual childhood:

Lord, my heart is not lifted up, my eyes not raised from the earth; my mind does not dwell on high things, on marvels that are beyond my reach. Bear me witness that I kept my soul ever quiet, ever at peace. The thoughts of a child on its mother’s breast, a child’s thoughts were all my soul knew. (Psalm 130)