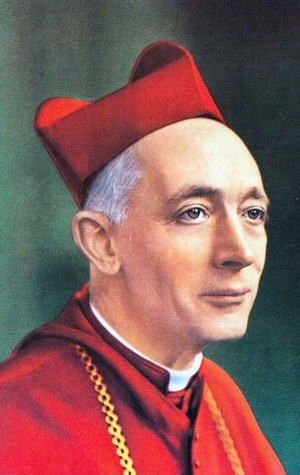 Our Contemporary
The Benedictine calendar of the saints, like that of the Universal Church, grows as the Church makes her pilgrim way through history. In recent years a number of holy Benedictines have been glorified by the Church and Christ has been glorified through them.

I have the impression that as we all advance in age the saints are coming closer and closer to our own lifetimes. This is certainly the case of the Blessed Ildefonso Cardinal Schuster, the Benedictine monk and archbishop of Milan whom we remember today. He died on August 30th, 1954.

If you were to look at photos of Cardinal Schuster — and there are many of them — you would see the serene face of a gentle ascetic. In his eyes there is something that suggests that he saw the invisible; his gaze is that of a man whose life was profoundly interior.

Essentially Adorers
Ildefonso Schuster, the son of a Roman tailor, the Abbot of Saint Paul-Outside-the-Walls, and the Cardinal-Archbishop of Milan, was at the same time a scholar learned in the Church’s liturgy, in history, in art, in catechesis, spirituality, and archeology; he was a shepherd of souls, a diplomat, and a peace-maker. Beneath the scarlet robes of a Prince of the Church, he remained a monk, a child of Saint Benedict. Thus was he able to say:

Before all other things, and even above all things, O Venerable Brothers, we are essentially adorers. “This is how one should regard us, as ministers of Christ” (1 Cor 4:1). After that we must also be ministers of the people, the salt of the earth, and fishers of men, etc. but first, it is absolutely necessary that we be true servants of God: Ministers of Christ . . . appointed to act on behalf of men in relation to God (Heb 5:1).

The Devil Is Afraid of Holiness
As Cardinal-Archbishop, Blessed Schuster never failed to direct the energies of his priests toward the One Thing Necessary. A few days before his death he withdrew to the seminary he had built and there he delivered a final message to his seminarians, warning them of the futility of an apostolate without personal holiness:

I have no memento to give you apart from an invitation to holiness. It would seem that people are no longer convinced by our preaching; but faced with holiness, they still believe, they still fall to their knees and pray. People seem to live ignorant of supernatural realities, indifferent to the problems of salvation. But when an authentic saint, living or dead passes by, all run to be there. . Do not forget that the devil is not afraid of our [parish] sports fields and of our movie halls: he is afraid, on the other hand, of our holiness.

At the Altar
When Blessed Schuster celebrated Holy Mass, his entire being was absorbed in the Divine Mysteries. There are many eyewitness accounts of the impact of his priestly devotion on the faithful. Benedictine to the core, Blessed Schuster was a humble master of the prayer of the Church, manifesting through his body, and extending into all of daily life the spirit drawn from the celebration of the sacred liturgy. Cardinal Giacomo Biffi says: “The simple folk ran to contemplate this slight and frail man who, in his liturgical vestments, became a giant.” Seeing him at the altar people recognized a man in communication with the invisible power of God.

There is no doubt that, if Cardinal Schuster were alive today, he would greatly rejoice in the Holy Father’s Motu Proprio Summorum Pontificum. One of Cardinal Schuster’s great works is his three volume Liber Sacramentorum, Historical and Liturgical Notes on the Roman Missal. He loved the Church of Rome, loved the Church of Milan, and loved their ancient liturgies because in them he recognized the heartbeat of the Bride of Christ and the true sound of her voice. 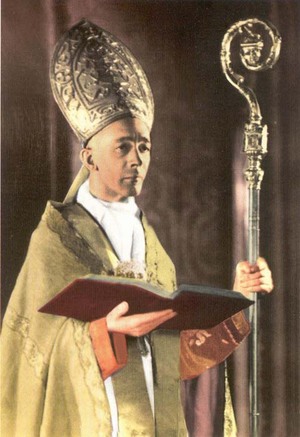 The Blessed Virgin Mary
Integral to Cardinal Schuster’s holiness was his tender life-long devotion to the Mother of God. Always guided by Sacred Scripture, by the Fathers, and by the liturgy, he exalted the role of the Virgin Mary as Co-Redemptrix and as Mediatrix of all graces in his preaching and in his writings. He presented the Marian feast of September 15th as “feast of the triumph of the Blessed Mother who, at the foot of the Cross, precisely by means of her cruel martyrdom, redeemed the human race together with her Son, and merited the triumph of her exaltation above all the choirs of Angels and Saints.”

A Monk in the World
Although Blessed Ildefonso remained a monk through and through, the service of the Church plunged him into the midst of a very troubled world. Benito Mussolini, the founder of the Italian Fascist movement had already risen to power when Schuster was named to the See of Milan. Initially, Schuster, impressed by Mussolini’s role in the Lateran Pacts, attempted to work with him, but by 1938 the Cardinal was obliged to speak out against his policies. At the end of the war on April 25th, 1945, seeing in Mussolini a sinner in need of reconciliation, he sought him out in Northern Italy and urged him to make his peace with God and with man. Il Duce rejected the Cardinal’s pastoral overtures and, three days later, was assassinated by a band of Italian partisans.

The Primacy of Holiness
We have much to learn from Blessed Ildefonso Schuster. Not all of us can be scholars, historians, archaeologists, or diplomats, but all of us can be saints. The message of Blessed Cardinal Schuster is the absolute primacy of holiness within the confines of the cloister and outside it. Blessed Ildefonso Schuster pray for us that we, like you, may be essentially adorers, those “adorers in spirit and in truth whom the Father seeks” (Jn 4:23).